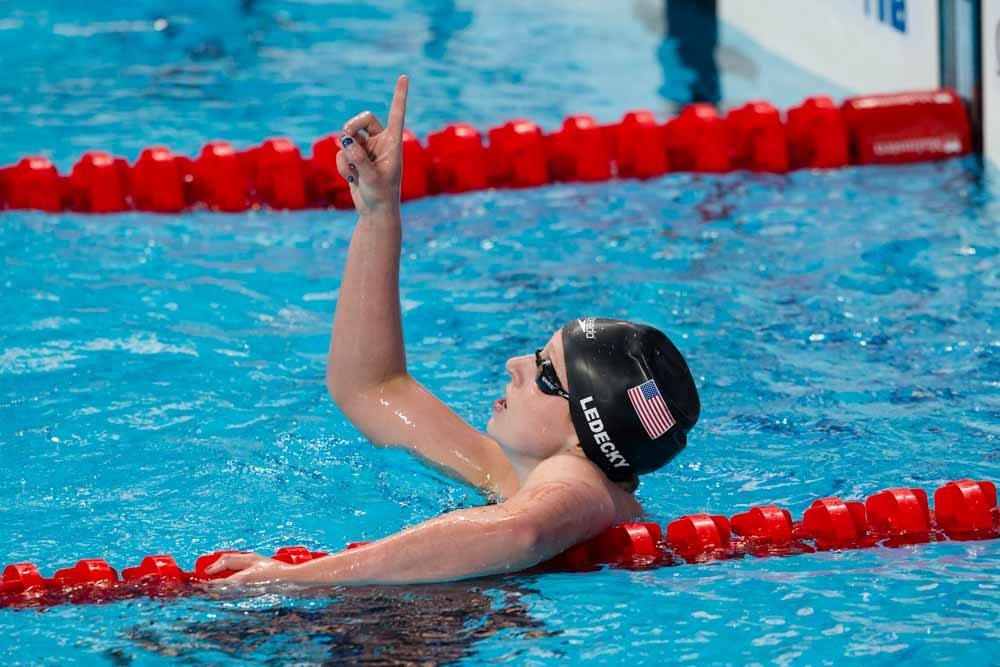 The women’s 200 freestyle is absolutely loaded with talent.  Okay, every event at the Olympic Trials is loaded with talent, but not in the same way that the women’s 200 free is.  In 2012 Allison Schmitt won the race in Omaha with a time of 1:54.40, and Alyssa Anderson made the team by finishing 6th and exactly 4 seconds behind Schmitt with a 1:58.40.  The entire field is much faster and deeper this time around, and it may take a 1:58.40 or faster just to make the semifinals this year.

Katie Ledecky has been unstoppable ever since she won her first Olympic gold in London four years ago at the age of 15 in the 800.  The once-and-future distance queen has proven her ability to swim the shorter races as well, beating out Italian world-record-holder Federica Pellegrini and teammate Missy Franklin last summer in Kazan to win gold in the 200.  Her endurance is complemented with sharpened front-end speed, as she has demonstrated with a series of 54-second 100 frees (and one 53) throughout 2015 and 2016.

Missy Franklin has been highly competitive in the 200 free ever since she placed 4th in it at 2012 Olympics in London.  In 2013 Franklin was World Champion in the event, and in 2015 she won the bronze behind teammate Ledecky and Italian world-record-holder Pellegrini.  Already having clocked a 1:57.67 at the Arena PSS in Orlando this March, Franklin looks not only for a relay spot, but for a chance to race the 200 free individually in Rio.

2012 Olympic Champion Allison Schmitt has been relatively removed from the spotlight since London, but her times speak for themselves.  Last summer, instead of swimming at the World Championships in Kazan, Schmitt swam at the Pan American Games, winning the race by over one second and setting a new competition record (1:56.23).  In April, Schmitt swam a brisk 1:56.52 at the Arena PSS in Mesa.  Training buddy of Michael Phelps and fellow disciple of Bob Bowman, Schmitt has the training and the tools to wow in Omaha.

Sprint star Simone Manuel has been steadily improving in the 200 free, and she even got a best time in Atlanta last month (1:57.90), swimming beside winner Ledecky.  Manuel, who swims for the Stanford Cardinal, has swum at the 2013 and 2015 FINA World Championships, as well as at the 2014 Pan Pacs, picking up medals of every color between the three competitions, including a gold in 2013 as a member of the 400 free relay.

Junior butterfly star Katie McLaughlin has shown promise on her road to recovery after a neck injury that she endured during Cal Berkley’s training trip to Hawaii between semesters of the past NCAA season.  McLaughlin, after taking months off from competition to focus on neck rehab and a lighter training regimen, recently resumed competition.  At the Fran Crippen Meet of Champions held in late April, McLaughlin posted a 1:59.74 in her 200 free, though she swam a 1:57.55 last summer.

IM stars Maya Dirado and Ella Eastin both have great 200 freestyle times, but both are better at the 200 IM, and the finals of the 200 IM and 200 free are in the same session, with the 200 free coming first.  Dirado went a 1:57.70 earlier this month at the Arena PSS and Eastin split a 1:42.18 as the second leg on Stanford’s 800 free relay at the NCAA Championships in March of this year.

If either or both make the 200 free final, though, it’d be a tough call to scratch out, with all but 2 of the A finalists making the Olympic team. We’ll predict both swimmers taking on the double at this point.

Leah Smith and Lia Neal both had stellar NCAA seasons.  At the NCAA National Championships held in March, Smith was victorious in both the 500 and the 1650, missing her own NCAA record in the 500 by about one second, and off her record in the mile by about 7 seconds.  Smith also took 6th in the 200 free at NCAA’s.  Smith swam a 1:56.64 at the Arena PSS in Indianapolis earlier this month, and is looking like a threat for a relay spot.  Neal took 3rd in the 200 free at NCAA’s, as well as 2nd in the 100 and 6th in the 50.  Though she has a slower LCM 200 than most of the others in this predicted top-12, her yards time indicates big potential in the Olympic pool.

One rising young swimmer who hasn’t made much of an appearance in our predictions yet is Katie Drabot. The Junior Pan Pacs gold medalist in 2014, Drabot has consistently cut time in this event since breaking two minutes for the first time in 2013. Drabot was third at U.S. Nationals last summer in a lifetime-best 1:58.58.

Mallory Comerford of the University of Louisville could be a dark horse in this race.  Though her best long course time is only a 2:00.31 swum in early March of this year, she placed 2nd at the NCAA Championships in mid-March, where she went a 1:42.54.

Too ambitious for Franklin, spot on for Ledecky. I think Smith, Franklin And Schmitt are all 55 high

In fairness though Franklin would not have to improve terribly much on last year to go Sub 1:55. The 200 free is the event that has held up the best since 2014. If she’s even a bit better than Kazan a sub 1:55 is very reasonable.

She was 1.55mid in Kazan; I have no issue with her bettering that mark but remember her PB is only 1.54.81 ….. WILL she really be in PB shape in this event ? By no means do I rule that out, her quality is indisputable, but neither do I see it as any stone cold certainty.

IF she is “off her game, Schmitt COULD snag the 2nd qualifying spot but conversely I feel some of those predicting a return to her London times or even 1.44low are taking some pretty big leaps of faith

I’m less certain about Schmitt actually. She could be anywhere between 1:54 to 1:56. I’m fairly confident Missy will be at least 1:55 low. I think it’s worth noting that many people have more confidence in her 200 back. I think that’s interesting given that she can put up a 2:09 in the 200 back and a 1:57 in the 200 free in Austin. It seems that if she manages to get down to a 2:06 in the 200Bk she ought to a least be able to go low 1:55. Not that I wholeheartedly subscribe to the transitive property of extrapolation but 1:57 is a strong in season swim for her. I do think she is more likely to set… Read more »

She’s always been strongest over 200 in either stroke and they have been the two events where she has held up best over the lean years.

I certainly see her best chance of individual success in Rio as being the 200back. Getting back to her best in that event is one enormous ask but realistically she would not need to to win either in Omaha or Rio. Even misfiring badly in Kazan, she was still a reasonably close 2nd and I’m not certain Seebohm 2016 is at the level of the 2015 model.

As for this event, I certainly see her as a potential medal player in Rio (should she qualify). At this point, it realistically looks Ledecky ahead… Read more »

Seebohm trains everyday with Minna Atherton & knew she was the 3rd best backstroker in the country. Seebohm did not need to be at her best at the trials to qualify. I am sure Seebohm 2016 will be much better then Seebohm 2015. Whether this good enough to defeat Franklin in 200 Back, depends on whether we see Franklin 2012,2013 or Frankin 2014, 2015?

Seebohm will win it. Missy? At the moment I don’t see her on the podium.

If SS would swim it. I’m not so sure

Hoping Katie McL is recovering well from the neck injury — fingers crossed for her to do well at Trials!

1:54.3 bronze? It could win the Silver, but maybe not. But then again, probably.

Dreamer, you nothing but a dreamer!!!!

Drabot is going to have a huge swim, watch out.

Surprised there is not even a mention of Runge?? Went a PB of 1:57.9 the other week in Austin. I expect her to at least make the (very tight) final.

totally agree, franklin will be a key relay swimmer however

I might be wrong, but wasn’t Katie Ledecky 15 when she won the 800 free in London?

When does the psych sheet come out?