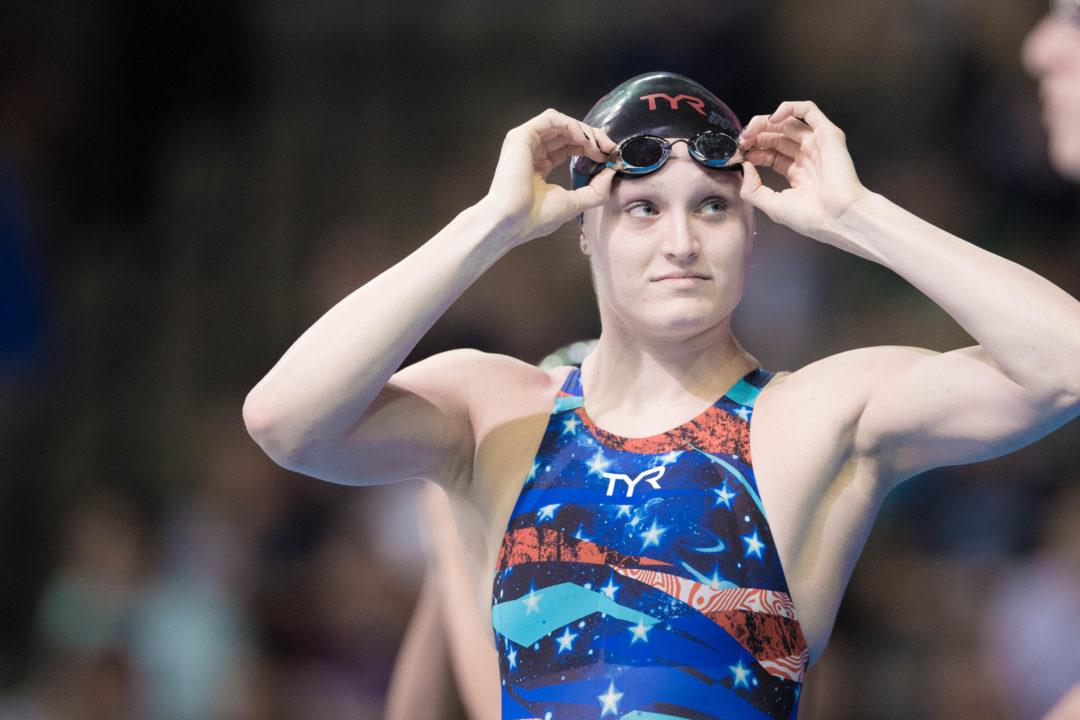 Watch: ‘Opportunity of a Lifetime’ for Simonas Bilis In 100 Free Final

Watch Simonas Bilis discuss his victory in the men’s 100 freestyle.

The morning predicts a two-team race for tonight, with a tight battle expected between Canada and the U.S. America’s Ali DeLoof, who is having the international meet of her life after big performances yesterday in the individual 100m back semi and women’s 4×100 relay, kicked off the American squad today with a mighty 26.57 opening 50m back. That ranks DeLoof as the 3rd-fastest American performer ever in the women’s 50m backstroke, sitting only behind Olivia Smoliga and Felicia Lee.

But, Canada’s Kylie Masse threw down a monster opening split of her own, touching in 26.67. That mark is just .02 of a second off of her own national record, which sits at 26.65 from February of this year. Look for her to bust out another fast mark tonight in the women’s 100m backstroke individual race, where she ranks as the top seed with the home Canadian crowd behind her.

Molly Hannis kept the stars n’ stripes’ speed going with her split of 29.48, the fastest breaststroke leg of the top 8 squads by .40 of a second. However, teen phenom and 2016 Olympic champion Penny Oleksiak stepped things up a notch for the Canadians come the 3rd leg, firing off a 25.42 split, followed by a strong anchor by Michelle Williams. Williams notched a split of 23.52, which would end up being the quickest of all top 8 relay contenders. Look for these two squads to go head-to-head right next to one another in tonight’s final.

The usual suspects of Park Tae-Hwan of Korea, last night’s 400m freestyle victor, and Chad Le Clos of South Africa, the reigning short course world champion, did their thing this morning in Windsor to make the final. But it was Trinidad & Tobago’s Dylan Carter who really made his mark in the morning session, cranking out a super swift time of 1:42.90 for the top seed. That establishes a new personal best for the 20-yr-old and smashes T&T’s national record. The time also sits just outside the world’s top 5 so far this season.

Le Clos’ teammate Myles Brown is headed to tonight’s final, as is Denmark’s Anders Nielsen, the latter of whom made it all the way from heat 1 (of 10) as he was entered with ‘no time’. Matias Koski of Finland’s 1:43.68 from heat 7 crushed his pervious personal best of 1:46.98 and now checks in as the fastest Finnish 200 scm time ever.

Canada’s Olympic gold medalist Penny Oleksiak continues to put on a show for the home crowd, claiming the top seed this morning in the women’s 100m freestyle. While fighting her way to the finish ahead of the Netherlands’ 2012 Olympic champion in the LCM version of this event, Ranomi Kromowidjojo, in the final heat, Oleksiak stopped the clock at 52.36 for a shiny new Canadian National Record. The teen is looking for some redemption after her would-be medal-winning 4x100m freestyle relay squad last night was disqualified for athletes swimming out of order.

Kromowidjojo looked smooth and controlled after firing off the blocks first, as is customary for the thoroughbred. Kromo clocked 52.75 for the 3rd seed behind Australia’s Brittany Elmslie, who touched in 52.72 for the first sub-53-second performance of the morning.

Last night’s 200m freestyle stunner, Federica Pellegrini of Italy is also slotted for the top 8, producing a solid 5th seed of 53.05. She holds a personal best of 52.17 set just this April in Riccione. 16-year-old teen phenom from Japan, who holds her nation’s record in the LCM of this event, snatched up the 8th seed in 53.17. Ikee is currently ranked 5th fastest in the world with her Tokyo World Cup time of 52.39, so her making the top 8 is no fluke.

The top 10 athletes all scored sub-51-second times as a testament to how tight this men’s 100m butterfly field is. However, the morning saw two Americans break through to the top of the pack courtesy of Tom Shields and Matthew Josa. Shields already ranks as the fastest American ever in this event, having clocked a 48.63 at last year’s Duel in the Pool. He looked entirely on form this morning, stretching those arms out in front and killing his underwaters as usual. 50.03 was the result for the former Cal Bear and 2016 Olympian.

Josa also hit the water hard this morning to notch a 2nd seed behind Shields. 50.51 is what Jose scored this morning, splitting 23.32/27.19. His entry time was 50.21 and with this event having 3 rounds, look for the new Cal Bear to drop time come tonight’s final.

Both men will need to hold off ever-dangerous Chad Le Clos, however. The South African world record holder in this event did his usual look-around-type stroke, but one can’t deny it does him justice, touching in 50.52 for an easy 3rd seed. Also in the semi-final top 8 for tonight is Great Britain’s Adam Barrett, his nation’s record holder in this event. 50.63 is what he earned in heat 8, but he’s been as fast as 49.31 in just August of this year.

Chinese fly maestro Li Zhuaho and GBR’s Mark Szaranek also made tonight’s semi, with the latter clocking a new Scottish national record in the process. Japanese double bronze medalist from last night, however, Daiya Seto, finds himself as the 17th ranked swimmer and out of the next round.

Well that was unexpected. At least as far as defending Short Course World Champion, current World Record Holder and 2016 LCM gold medalist in this event, Mireia Belmonte of Spain is concerned. The 26-year-old was a complete non-factor in the morning heats, finishing 19th in a time of 2:10.21 after having been entered with a 2:06.32. Update: Belmonte was listed to swim the 800m freestyle later in this session, an event in which she holds the championship and world record but she was a no-show.

Instead, it was America’s Kelsi Worrell who went full throttle this morning in the women’s 200m butterfly, stopping the clock at 2:03.94 to become the 3rd-fastest American performer ever in the event. Worrell looked strong and beastly underwater, and was able to snag the only sub-2:05 time of the morning.

Gunning for another gold, however, will be Hungarian Katinka Hosszu, continuing with her monster event schedule by snatching up the 4th seed in 2:05.83. She missed out on gold in the women’s 200m freestyle last night and will be looking for another top prize to add to her potentially historic medal haul here in Windsor. However, she 100 backstroke final on her plate later in the evening.

Home nation Canada has a horse in the race with Katerine Savard, the 6th seeded swimmer. She registered a time of 2:07.54, quick enough to contend for a minor medal in tonight’s final.

The Dutch foursome of Jesse Puts, Nyls Korstanje, Kim Busch and Tamara Van Vliet combined to earn the quickest mixed 4x50m freestyle relay time of the morning in 1:31.30. Puts, the newly-minted national record holder in the 50m freestyle, cranked out a swift 21.41 opening split, a mark only met by Hungary’s Maksim Lobanovskii. The remaining members of the Dutch squad were able to hold off Russia, who wound up touching in their heat just .09 behind in 1:31.39.

Finland’s Ari-Pekka Liukkonen can be credited with the fastest split of the entire field, stopping the clock at 21.09 for his 2nd leg. Finland qualified 5th.

As a note, every major national player in the event stacked their mixed relay as M, M, W, W.

The women’s 800m freestyle heats was entirely the Leah Smith show, as the American trounced the entire field with her incredible time of 8:07.67. Headed into this meet, the Olympic bronze medalist in the women’s 400m freestyle had an 800 scm best time of 8:10.03 from last year’s Duel in the Pool. But the Virginia athlete crushed that mark, as well as the American Record of 8:08.00 held by Kate Ziegler since 2007. As such, Smith now checks in as the fastest American female ever in this event and looks to claim gold in the final tomorrow night.

After a disappointing outing in the women’s 200m butterfly, Spaniard’s world record holder Mireia Belmonte was a no-show in heat 3 of this event, having confirmed to her swimming federation she is sick. Iron Lady Katinka Hosszu made the final, as did Smith’s teammate Ashley Twichell. 2016 Open Water gold medalist Sharon van Rouwendaal fell just sort winding up in 9th place.

LeClos is going to have an insane 200 free.

He is the favorite. But the Russians are in a surprisingly good shape, watch out for Aleksandr Krasnykh.

According to WADA, there’s usually reasons why the Russians are surprisingly in good shape.

In good shape in short course. We’ll see next summer.

He’s just practicing his turns for the big pool next year. Lol

Dylan Carter is no slouch either.

Molly Hannis’s turn in the medley was pretty cool – just took the dolphin kick and started swimming. Totally stealing that.

She skipped the pullout at trials and there’s a video here discussing it. At the time she also skipped the dolphin kick so I’m glad she added that in.

She really has a unique breast stroke with the very abbreviated kick and accentuated dolphin motion. I’m stealing that too. https://www.youtube.com/watch?v=h01g8izG5yc

It did? How did he do this summer?

you know when you actually get that fast its hard to continuously improve as though you’re an age grouper, just an idea for you to think about

A best time if I’m not mistaken.

Better than you probably