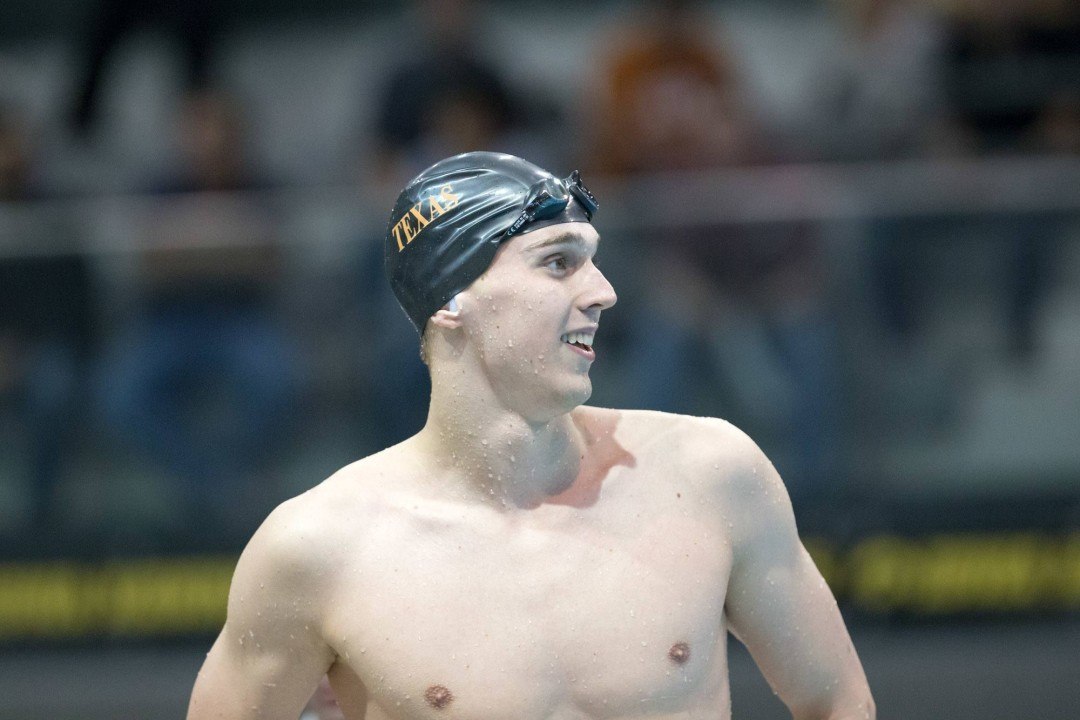 Texas junior Clark Smith will return to the 500 freestyle as the defending NCAA champion. Smith, who won the event in 4:09.72, is the heavy favorite to win the 500 again this year. He's already been faster than that this season, posting a 4:08.82 at Texas Invite. Archive photo via Tim Binning/TheSwimPictures.com

Texas junior Clark Smith will return to the 500 freestyle as the defending NCAA champion. Smith, who won the event in 4:09.72, is the heavy favorite to win the 500 again this year. He’s already been faster than that this season, posting a 4:08.82 at Texas Invite. That swim put him within tenths of Peter Vanderkaay‘s NCAA Record of 4:08.60 and American Record of 4:08.54. Smith will get a shot at those records again on Thursday night.

Behind Malone, Townley Haas, Akaram Mahmoud, and Anders Nielsen have the 3rd through 5th seeds headed into the meet. All 3 of these men are entered with 4:12s. Haas, a freshman at Texas, posted a 4:12.63 at Big 12s for a lifetime best and 3rd seed. Nielsen, who was 4th in this event last year, enters with a season best 4:12.83 from Big Tens. Mahmoud’s 4:12.78 entry time is from prelims of SECs. The battle between these 3 could get very interesting.

The Florida Gators have a pair of swimmers who also make a case as top 5 threats. Pawel Werner enters the meet as the 6th seed with a 4:13.31. Werner won SECs with that time, working a killer back half to get to the wall first. Look out for him through the last 200. His teammate, Mitch D’Arrigo, is entered as 8th seed with a 4:13.92. D’Arrigo was 6th in this event last season, but his best time of 4:10.77 makes him a serious contender. If he can match that, he may be in the top 3.

Georgia’s Matias Koski has the potential to be a factor in the finals of this race. Koski’s best time is a 4:11.83 from last season’s NCAAs, where he placed 9th. In order to be a big player in this even’t, he’ll have to swim fast in prelims. Last season, he didn’t make the top 8 in the 500 at SECs, but swam a time in consols that would’ve placed him 2nd overall in the final. His 4:11.83 in consols at NCAAs would’ve landed him 3rd overall in the final. If Koski steps it up in prelims, and makes it into the top 8, he should have a good shot at a top 5 finish.

Stanford sophomore Liam Egan also has a chance to final in this event. Egan comes into this meet as the 7th seed. Egan finished 2nd at Pac-12s this season behind Malone, clocking a lifetime best 4:13.67. If he can hold that time in NCAA prelims or improve on it, he may reach All-American status in this event.

Darkhorse: NC State’s Anton Ipsen enters the meet as 10th seed with a 4:14.53. He was 10th last season in a personal best 4:13.58 to score for the Wolfpack in this event. He’ll be looking to move up into the top 8 this time around.

Ok. Technical error. My comment had been posted. I couldn’t see it. And now I can see it.
Looks like every time I write “Psychodad”, the comment is under scrutiny. 🙂

I don’t know why my comment has not been posted. So I’m doing it again.
For Psychodad.
Where have you seen in my comment above that I talked about conversion times from yards to meters?
Read again what I’ve said. I talk about the SCM world record of Mr Agnel.
SCY to LCM is stupid.
LCM to SCY is stupid.
SCM to SCY is not stupid.
SCY to SCM is not stupid.
Psychodad, you are, as always, hilarious.

So read again my comment and then you can speak.
Have a good day.

Reed Malone is trending up.

You made fun of someone converting yards to meters, and now you are doing it. Tsk, tsk, tsk…

Korn. Everyone does things they regret. I’m sure Clark will show up, win or lose. You can question his decision-making, but his work ethic is among the best Eddie has ever had. Just ask him.

Townley Haas is the only swimmer who can possible beat Clark in Atlanta. They will be side by side first 400 but then Clark kicks it in the next gear and wins. Townley spends much more energy than Clark does and that will decide last 100. Horns win 1st and 2nd in this race. Hook’em!

If Clark doesn’t win, hope he doesn’t act like a baby and not show up for the podium like he did last summer….that was classless!

No it was puking.

I’d rather he not be on the podium puking… just sayin’. Clark’s a classy guy!