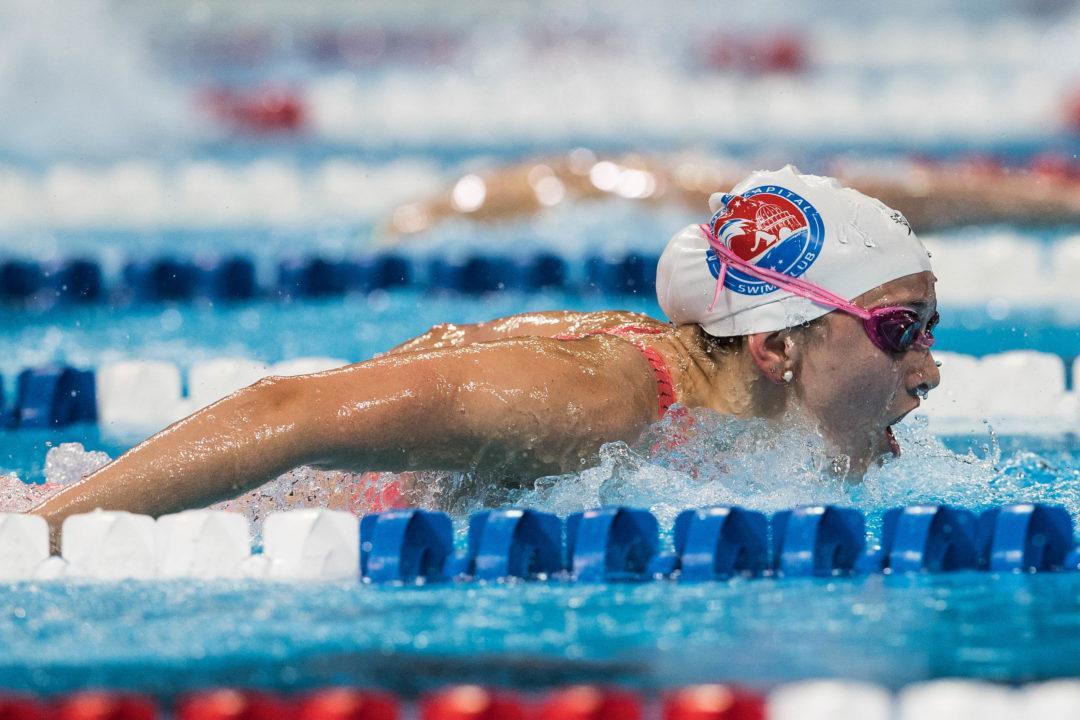 Isabel Ivey of the United States had an incredible second half making the race for silver a close one. Ivey turn at the 100 meter mark in a time of 59.33 close to a second and a half behind Smith. She came home in a time of 59.61 finishing four one-hundredths behind Smith touching in a time of 1:58.94.

The Aussie men dominated the 200 freestyle as Jack Cartwright and Louis Townsend took the gold and silver finishing over a second ahead of the field. Cartwright had the lead at the half way point turning in a time of 52.29 followed by Townsend who split a 52.99. Cartwright was able to hold off Townsend in the final 100 meters winning the event in a time of 1:47.68. Townsend hit the wall five one-hundredths of a second later posting a time of 1:47.73.

Both men were under the competition record of 1:48.29 set by American Townley Haas in 2014.

American Drew Kibler finished third in a time of 1:49.09. Kibler was the youngest man in the final being born in 2000 while the rest of the competition was born in 1998. With his time in the prelims of 1:49.81 he placed himself fourth all-time for 15-16 year olds in the United States. Tonight Kibler moved himself into the second place position not far behind Caleb Dressel.

The women’s 100 backstroke was a dramatic event for two reasons. The race was an extremely close battle between Australian Minna Atherton and American Lucie Nordmann. Atherton hit the 50 meter mark in a time of 29.34 followed by Nordmann who turned in a time of 29.77. The American stormed back in the second half of the race nearly catching Atherton, who holds junior world record in the event. The Australian won the event in the time of 1:00.45 followed by Nordmann who posted a 1:00.55.

That was not the end of the drama as initially Atherton was disqualified for having her toes in the gutter on the start, but the disqualification was eventually overruled.

Both Atherton and Nordmann were under the competition record of 1:00.82 set by Sayaka Akase of Japan in 2010.

Kaylee McKeown of Australia finished third in a time of 1:01.01.

Just as the Australians did in the 200 freestyle the Americans finished first and second in the 100 backstroke. Michael Taylor led the event from start to finish winning the event in a time of 54.21. He was followed by teammate Cameron Craig who touched in a time of 54.74.

Leon MacAllister of Australia finished third in a time of 56.14.

Cassidy Bayer of the United States dominated the women’s 200 butterfly finishing close to four seconds ahead of the field. Bayer won the event in a time of 2:08.48 breaking the championship record of 2:09.02 set by Haruno Ito of Japan in 2014. She was off her lifetime best of 2:07.97 that she posted at this year’s Olympic Trials.

Japan became the third nation to finish with gold and silver in the same event. Nao Horomura led the race from start to finish touching in a time of 1:57.01. He was followed by teammate Yuya Sakamoto who hit the wall in a time of 1:57.90 and American Sam Pomajevich who posted a time of 58.22.

Li Bingjie took her second event of the evening winning the women’s 800 freestyle in a time of 8:28.12. Li was once the again the youngest in the field by a large amount being born in 2002. American Joy Field, who was born in 1998, finished second in a time of 8:31.21 followed by Canadian Oliva Anderson who touched in a time of 8:32.84.

American Robert Finke dominated the field in the men’s 1500 freestyle winning the event in a time of 15:05.29 finishing over 15 seconds ahead of the next competitor. Finke broke the championship record of 15:10.07 set by Australian Mack Horton in 2014. Fellow American Andrew Abruzzo finished second in a time of 15:20.62 followed by Atsuya Yoshida of Japan who hit the wall in a time of 15:27.61.

Should read Kaylee McKeown (not Taylor who is her older sister!)

Anyone know why the Bahamas are at the meet? It is in the Carribean

Excellent picture of Cassidy. The lady is a grinder on the second half of her races. Never count her out! She has a very promising future for the USA Team.

Bobo, Just a few questions:
Why are you saying w100 back slower than expected?
Obviously the Aussie girls Atherton and McKeown were aiming and peaking for the Aussie trials, not this meet.
Contrast that with your excuse for slow m100 back.

1. Drew Kibbler is really tall. How tall is he? He tried to do a classic Nicole Haislett move on Jack Cartwright, unsuccessfully, but great effort nonetheless. Both Aussies freestylers (Cartwright and Townsend) are very impressive. Combined with Chalmers, they will form a formidable 4×200 in Tokyo.
2. Cassidy Bayer is prime to represent USA next year in Budapest. .
3. Michael Taylor and Cameron Craig, the backstrokers, dwarve over the aussie bronze medallist. To borrow Bobo Gigi’s words: Aussie coaches need to travel to USA to identify big, tall, burly men’s backstroke talent to be successful.
4. Li Bingjie is astonishing. Winning 200 free in 1:58 and 800 in 8:28 within an hour, at the age… Read more »

Drew Kibler has been recently been listed at 6 foot four. But still a young 16-year-old so may not be done growing.

It’s far too early to tell, but if Australia can pull it together in four years, they could have a very dangerous 4×200. It will be an exciting event, I’m sure.

Jeff, can you please post the results of each race with at least the podium (names and times)? Thanks.

Maybe a separation between paragraphs next time.

Caeleb Dressel, Ryan Murphy, Townley Haas et al didn’t red-shirt. They swam and trained in bath tub. They medaled. How about Jacob Pebley? you conveniently have forgotten about him.

How about Cordes who worked really really hard and devoted the whole year to train LCM for the Olympics, and compared that to Josh Prenot?

I agree. Seems like a case of confirmation bias to me.

To say nordmann confirmed she’s the best US JR backstroker is very debatable. Regan Smith is a full two years younger but only one tenth behind her at 1:00.26. Nordmann MUCH bigger and stronger as of now. Smith will develop a lot more strength over the coming year. It’ll be very interesting. Smith appears to be close to swimming World Cup for USA in October. So, by the way, is Nordmann. Both girls are very talented and clearly love to compete. But Smith cut impressively at Jr’s across 6 or 7 events. 2nd in high point by 2 points despite one less event than Kenisha Liu. Her rate of development at 14 is promising.

I agree with Jake.
Apart from fa’amausilli, Nordmann looked the most physically developed in that final.
Walsh and Smith are younger, and you can’t expect them to improve or swim fast all the time. There’s always ebb and flow.

It makes little sense to compare these great talents. Let’s instead celebrate the depth of US ladies’ backstrokers. Regan looked fantastic at the JNAT in Minneapolis. A lot can change for these young ladies in coming years, training, transition to womanhood, etc. Already looking forward to 2020 Trials!!

This shows the mega yardage helps 1500 a lot since Hackett did the time years ago.

Bobo! I missed your commentary during the Olympics. Did you post your thoughts on Rio anywhere?

Yes Bobo posted his thoughts about the Olympics here

Smith recently changed clubs from Red Deer to Cascade under Dave Johnson. She was also on the Alberta squad that raced Mare Nostrom.