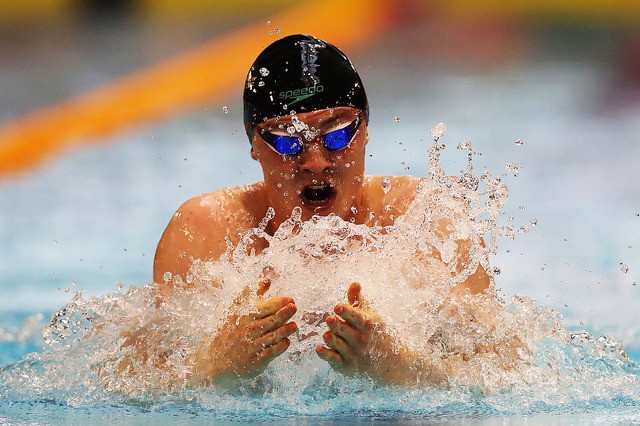 University of Stirling's Ross Murdoch will take on the likes of Andrew Willis, Michael Jamieson and Craig Benson in the men's 200m breaststroke. Archive photo via courtesy of Scottish Swimming

Leading the pack is Bath University stand-out Andrew Willis, the 4th place finisher in this event at the 2015 FINA World Championships. Whereas in Kazan he clocked a time of 2:08.52 in the final, Willis started things off more tempered this morning, stopping the clock at 2:10.47 for the top seed.

The fact that 4 of 8 swimmers to post 200m breaststroke times worthy to make it back in tonight’s final are from Scotland speaks to the hotbed of talent growing in this particular geographical area in the discipline. We’ve documented how the University of Stirling, in particular, has a close-knit training group of budding stars who may just produce a podium threat in Rio.

This morning, 2014 Commonwealth Champion Ross Murdoch (Stirling) notched the 2nd seeded time with his AM outing of 2:11.06, while his Stirling teammate Craig Benson nabbed the 4th seed in 2:12.24.

Both men will take on another Scot, Michael Jamieson, who, after a rocky past couple of years, nabbed the 5th seed in 2:12.37 to keep his Olympic dream alive. Jamieson’s best time since 2014 is the 2:10.91 he scored at the U.S. Nationals meet in San Antonio last summer, which means he’ll need to finally get over his hump of lackluster swims to have a chance at even approaching the OLY standard of 2:08.52.

We also need to keep an eye on 100m breaststroke world record holder and 2016 British Champion, Adam Peaty, who sits as the 3rd-fastest qualifier in 2:12.16.

Entering the meet, Great Britain is lacking any female ranked within the world’s top 25 in the 100m freestyle on the season. The fact that the stiff British Olympic-qualifying standard of 53.68 is currently a 9th-ranked time in the world points to exactly how high of a level the British females will need to crank it up in tonight’s final if they wish to see at least one qualifier be added to GBR’s Rio roster.

Winding up on top from the morning swims is Fran Halsall, last night’s 50m freestyle victor, who checked in this morning in 54.22. She’s been as fast as 52.87, the British National Record, but that mark was from the supersuit days, rendering it not exactly on the same level as today’s swimming in textile suits. Her quickest time since that era was the 53.48 she registered in 2011 in Shanghai, so the 25-year-old will need to score a swim in that realm in order to punch her ticket to Rio.

In contention just .07 of a second behind is Bath University’s Siobhan-Marie O’Connor, who swam her way to the 2nd seed in 54.29. O’Connor is the reigning British Champion from her 53.83 outing from last year, so she and Halsall will indeed battle it out tonight in the final.

3rd-seeded Harriet Cooper of the City of Derby is having a hot meet, having already earned the ‘gold’ by winning the Target Tokyo 100m backstroke final. Cooper was also the fastest qualifier in yesterday’s 16-19 age group 50m freestyle and earned an 8th seed in the open final, but decided to scratch the splash n’ dash in order to focus on today’s longer sprint.

16-year-old Georgia Coates earned her 3rd final appearance after already having raced the women’s 400 IM and 200 freestyle from earlier in the meet. Both of those events fell on the same night, so she scratched the 400 IM, but the fact she’s made 3 finals at a young age bodes well for Tokyo 2020. Coates holds the 8th seed from this morning in this 100m freestyle event in 56.02, a personal best by about 2 tenths of a second.

This year’s British National Champion in the men’s 400m freestyle, James Guy, leads the field of his “fun event”, as he has called it, the men’s 100m butterfly. 52.45 was enough to log the swiftest time of the morning, his fastest of the season. Earlier this year he notched a time of 53.03 in Marseilles, so the 200m freestyle World Champion is already well ahead of that mark here in Glasgow.

Plymouth Leander’s Antony James came right at 53.00 to nab the 2nd seed, while Loughborough’s Adam Barrett sits as the 3rd-fastest swimmer of the morning in 53.08.

Last year’s winner in this event, Thomas Laxton, was just edged out of the final, finishing 9th overall in a time of 53.76. 2015’s runner-up, Timm Braxston of Sheffield, will try to improve on last year’s silver tonight, as he is in the 4th-seeded position holding a time of 53.37.

All men sit a mile away from the British Olympic-qualifying standard of 51.24, however, so this very well may turn out to be an event with no GBR representation in Rio.

Last year’s winner in this event, Elizabeth Simmonds, is at it again, establishing her pole position early in a time of 2:11.58. That mark, however, was just over a tenth faster than a charging Chloe Hannam from Peterboro, who clocked a time of 2:11.74 to sit as the 2nd seeded swimmer.

Georgia Hohmann, the University of Florida Gator, will also flank Simmonds in the final tonight, having scored a time of 2:13.12, while Manchester Aquatics’ Jessica Fullalove is also in the mix as the 4th seed (2:13.16).

15-year-old Tazmin Pugh shook things up this morning, touching about a half second off of her personal best of 2:13.58 to register a time of 2:14.08 this morning to wind up as the 7th seed.

Another youngster in the form of Rosie Rudin may surprise the field tonight, lurking as the 5th seed from her 2:13.51 morning outing. Rudin finished 7th overall in the women’s 200m backstroke event at the 2015 FINA World Junior Championships in a time of 2:12.23.

As with the women’s 100m freestyle, however, the GBR female contingency is lacking a swimmer within the world’s top 25, which doesn’t bode well for someone to clock a time near the 2:08.21 British Olympic-qualifying standard tonight.

Last year’s winner in this event, Stephen Milne, already earned a 2016 silver medal in the mens’ 400m freestyle behind James Guy. This morning, Milne set the stage for a potential gold in the grueling 1500m freestyle race, sitting in the 2nd seeded spot with his morning swim of 15:16.02.

Just 3 seconds ahead at the top of the field is 19-year-old Daniel Jervis from Swansea Aquatics. Jervis checked in at 15:13.80, a ways off from his lifetime best of 14::55.33, the mark which earned him bronze at the 2014 Commonwealth Games.

All in all, the men collectively played it safe, saving their energy for when it really counts in the final.

Perhaps the best swims came from youngsters this morning.