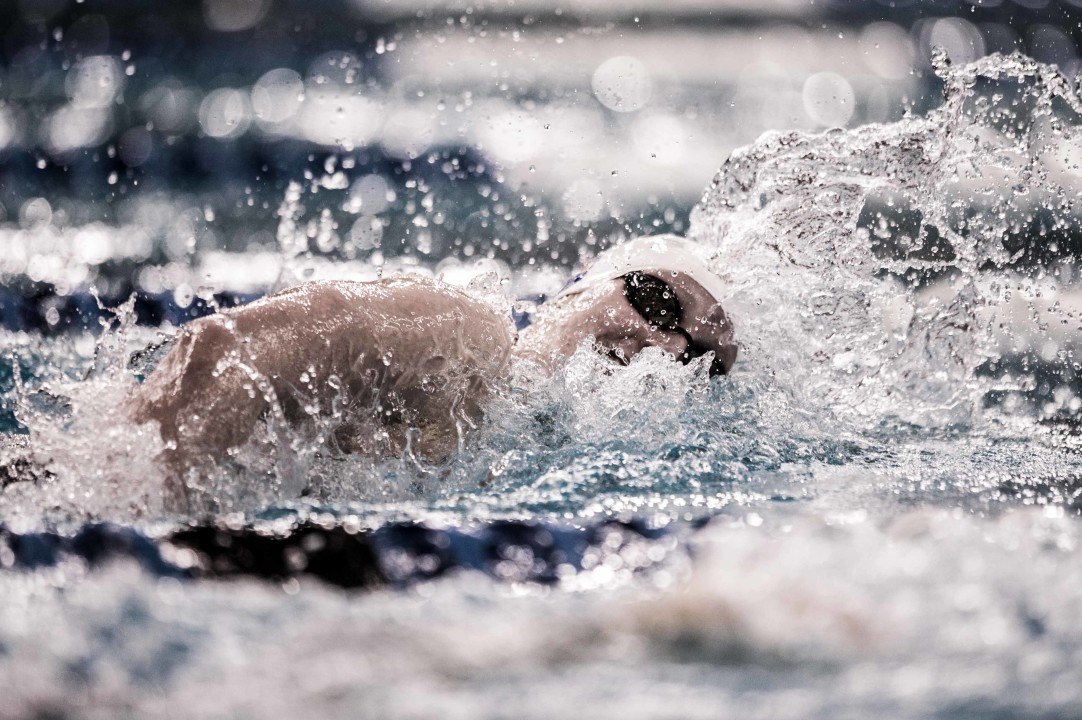 Katie Ledecky could be chasing her own world record in the 800 free on night 3, a month after smashing the best time in history in the short course 1000. Current photo via Mike Lewis/Ola Vista Photography

Katinka: It was nice having Hungarian Support in Austin (Interview)

After a rocky couple weeks in the Hungarian media, the Iron Lady was showed some support via an enthusiastic cheering section from her home country

The final night of action at the 2016 Arena Pro Swim Series at Austin should be a good one, with 10 events set to conclude the tour’s second stop.

Katinka Hosszu looks for a pair of wins and leads the 200 IM. She’ll have to knock off Olympic champ Missy Franklin in the 100 backstroke, though. For the men, David Plummer, Matt Grevers and Ryan Murphy should be in line for a huge battle in the 100 back, with Junya Koga perhaps getting into the mix as well in a deep field.

Olympians Cammile Adams and Tyler Clary lead the 200 fly races. In the night’s last A final, the legendary Michael Phelps battles world champ Ryan Lochte in the 200 IM with college stars Josh Prenot and Andrew Seliskar in the mix.

And of course, there’s the distance heats to end the night, with the fastest 8 swimmers in the men’s 1500 free and women’s 800 free taking off. Olympian Connor Jaeger is the top seed for the men, and in the women’s race, Katie Ledecky is after her third win of the weekend and perhaps even her own world record after crushing the fastest short course 1000 yard freestyle in history last month.

Keep refreshing this page for live event-by-event recaps, and follow @SwimSwamLive on Twitter for up-to-the-second results from Austin.

Without Katie McLaughlin in the field, it was the other U.S. entrant from the 2015 World Championships who was all alone out front by the end of this race. That was Cammile Adams, who won silver in Kazan. Adams was 2:08.21, using a great back half to shake the field.

Leading at the 100-mark was 16-year-old Cassidy Bayer, but the youngster fell off a bit down the stretch, fading to third in 2:10.14. Canada’s Audrey Lacroix passed her up in the back half for a 2:09.90 second-place effort.

Also right in the thick of things was 200 back Olympic champ Tyler Clary. The versatile SwimMAC swimer was 1:58.61. Clary has a wide range of events possible for U.S. Trials, and the 200 fly could wind up being a possibility for him along side both IMs and the 200 back. But Clary has continually run up against Michael Phelps and Ryan Lochte in the IMs, and would probably have to battle Phelps for a Trials spot in this race too, along with the youngster Seliskar.

The women’s 100 breast was a dead heat at 50 meters, with Jamaica’s Alia Atkinson leading American Katie Meili by just .05. It wa a rematch of the 2015 Pan American Games, where Meili topped Atkinson, and Meili ended up coming from behind to take this win as well. Meili went 1:06.75 with Atkinson going 1:07.47.

Tennessee’s Molly Hannis came up with a big back half to surge into third at 1:07.50. Olympian Breeja Larson had a similar back half, but couldn’t match Hannis’s early speed and ended up 4th in 1:08.09.

Swimming in his new training home, Division III NCAA champ Andrew Wilson picked up the win, going 1:00.42. Wilson swims in the NCAA for Emory University, but has moved to Texas where he is redshirting the season and training with the Texas Longhorns.

Just behind was Kevin Cordes, the Arizona NCAA star who is now training in Singapore with coach Sergio Lopez. Cordes was 1:00.53, and a tenth back was Missouri grad Sam Tierney at 1:00.63.

Hungary’s Katinka Hosszu made her first appearance of the night in winning the 100 backstroke on a big back half. Hosszu trailed 18-year-old American Kathleen Baker at the 50, but surged back to go 59.91 for the win.

Olympic champ Missy Franklin had an even better back half than Hosszu, and passed up Baker for silver in 1:00.03. Baker, a freshman at Cal, where Franlin starred for two seasons, was 1:00.04 to finish just behind in bronze.

Swedish butterfly star Sarah Sjostrom made a rare foray into backstroke, winning the B final in 1:00.49.

The men’s 100 back turned into a three-man showdown between Americans in a race featuring three of the top candidates for the two U.S. Olympic team spots. David Plummer led at the 50, but Olympic champ Matt Grevers rolled through the back half to win in 53.35. NCAA star Ryan Murphy actually had the field’s best closing split and just eked out second over Plummer at 53.46. Plummer was 53.50 in a very tight battle.

Club Wolverein’s Junya Koga, who competes for Japan, was 53.97 for fourth, with new Serbian national Arkady Vyatchanin going 54.33 for fifth.

Swimming in her second A final of the past half hour, Hungary’s Katinka Hosszu was unstoppable, winning the 200 IM in 2:10.69.

Hosszu is in the midst of some conflict with her federation, which she says is unwilling to adequately support her training needs, but it didn’t seem to affect her swimming much, as she won the race by more than a body length.

Also pulling a double tonight was Melanie Margalis, who got hot at the end of the race to sneak into second place at 2:12.67. Margalis was coming off a win in the 100 breast B final. She passed up Texas A&M Aggie Sarah Henry (2:12.77) and Zimbabwe’s Kirsty Coventry (2:12.86) for that spot.

In a showdown of last year’s world champ and world rankings leader, Michael Phelps and Ryan Lochte went head-to-head for yet another time in their storied careers. Lochte jumped out to an early lead, but things were nearly tied by the 150-mark. At the end, though, it was Phelps who got to the wall first from the middle of the pool, going 1:58.00. Lochte, swimming in an outside lane, was 1:58.43 to take silver in one of the weekend’s most memorable races.

Phelps competes for the North Baltimore Aquatic Club but now trains in Arizona with the Arizona State Sun Devils, while Lochte has moved from Florida to SwimMAC in Carolina as both legendary athletes continue dominating into their 30s.

Those two were well ahead of the field, with Cal’s Josh Prenot taking third in 1:59.94. Prenot was himself a second ahead of the next-best competitor, Scotland’s Dan Wallace (2:00.90). Wallace was the first of three Gator Swim Club swimmers to finish in succession: Eduardo Solaeche was 2:02.18 for 5th and Nikita Denisyako 2:03.58 for 6th.

Swimming in his second A final of the night, Cal freshman Andrew Seliskar was 2:03.92 to take 7th, and Wisconsin alum Michael Weiss went 2:04.59 for 8th.

Katie Ledecky has done it again. Anticipation had been building for this race ever since she pulled an amazing 100 free/400 free double on day 1, and Ledecky topped all of this weekend’s races with her last one, smashing her own world record with an absurd 8:06.68. We’ll have more coverage coming to properly cover all the aspects of Ledecky’s dominance, but as a teaser, that swim is a full 7 seconds faster than anyone else in history, and Ledecky now owns the fastest 8 swims in all of history in the 800 free.

Second went to 18-year-old Becca Mann at 8:24.49, which is a solid mid-season swim for her. Mann, a high school senior who will attend USC next year, is in the hunt for the second U.S. Olympic spot behind Ledecky this summer.

Rounding out the top 8: North Baltimore’s Sierra Schmidt (8:38.73) and Triangle Aquatic’s Ashley Twichell (8:41.23), who was the top swimmer out of the afternoon heats.

Following up Ledecky’s blowout swim, American Connor Jaeger also won by a wide margin, going 15:06.24 to win the men’s 1500 free and cap off the night.

Jaeger topped his countryman Andrew Gemmell, who was 15:14.17 for second place. The top qualifier out of the afternoon heats, Tunisia’s Ous Mellouli, wound up third overall, with his 15:19.94 beating out everyone but Jaeger and Gemmell.

Fourth and fifth also came out of the early heats, with Tobias Robinson of Great Britain going 15:22.23 and NC State’s Anton Ipsen 15:25.51.

Swimming in front of his home University of Texas crowd, Michael McBroom went 15:25.83 for 6th overall and 3rd in that final heat.

Mexican 18-year-old Ricardo Jacobo was 7th from the early heats with his 15:28.93, and El Salvador’s Marcelo Acosta went 15:31.50 to take fourth in the final heat and sneak into the top 8 overall.

Cordes doesn’t hold the breastroke meters short course American records anymore– didn’t Cody Miller get them both at Duel in the Pool?

Is there a link to the Lee & Joe Jamail Texas Swimming Center pool records? Rowdy was talking about the great fast swimming that goes on there. Stuff’s probably been taken down a lot on the women’s side this weekend.

Shields doesn’t seem to do that thing that good 200 flyers do, getting his shoulders down at the beginning of his stroke and getting his hips up. He needs more of that plunging dolphin motion when his arms are extended in front, that actually sort of rests the shoulders and keeps them from tying up at the end of a long course 200 fly. It’s frustrating to watch, because he’s obviously as talented as anyone out there, and he just went that 1:49.0 short course at the Duel, and he’s a consistently great short course (meters or yards) swimmer, and a consistently great long course 100 flyer. But he needs to throw his head down more after he’s through breathing,… Read more »

Looks like its going to be a tough fight for the breastroke spot on that medley and the individual between Wilson, Miller, Cordes and Fink.

Wilson is sneaky fast–hopefully Miller will be at the next arena pro am and we can see all these guys race again.