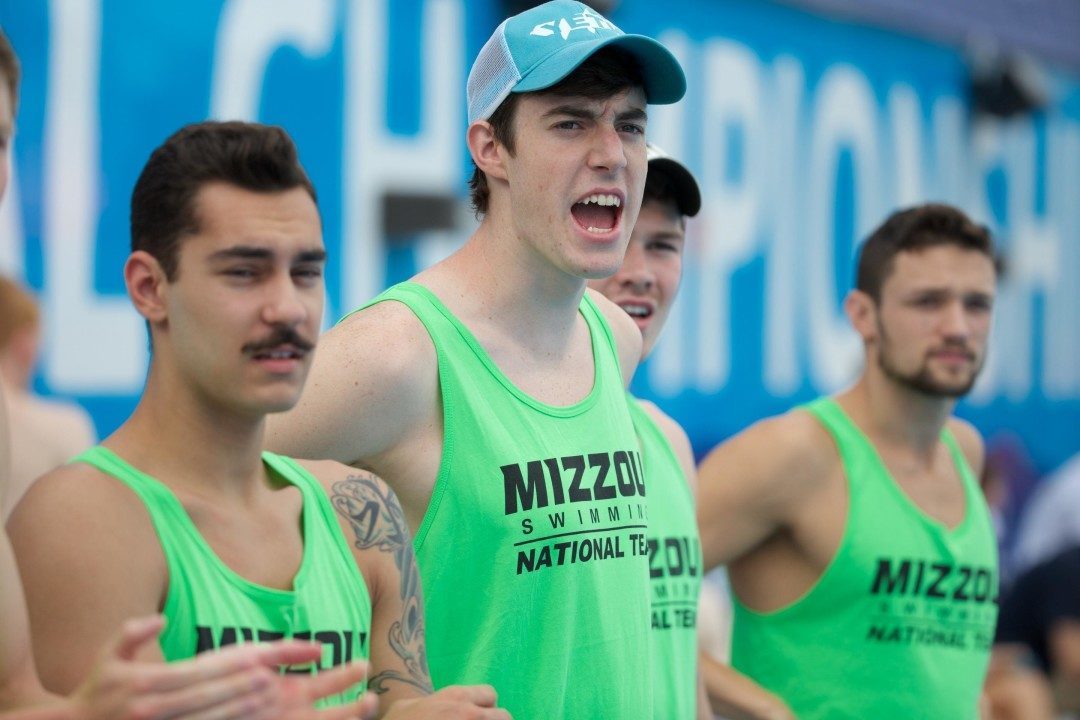 Daniel Hein, who won the 100 backstroke at both the long course and short course YMCA National Championships this... Archive photo via Rafael Domeyko

Daniel Hein, who won the 100 backstroke at both the long course and short course YMCA National Championships this past year, has committed to the University of Missouri. Hein swims with the Kishwaukee YMCA of Dekalb County (DCST) and swims for Dekalb High School in the IHSA.

Hein is very good in both butterfly and backstroke, and on top of that, he has sprint speed and can match that ferocity in longer races. He was all over the place at YMCA Nationals this year, both in short course and long course.

We mentioned already that Hein won the 100 back both Y Nats meets, and he also had impressive results in his other events– at the short course championships in April, he won the 200 fly, finished 4th in the 200 back, and grabbed 6th in the 100 fly. At the long course meet in August, he finished 2nd in all of his other events: the 100 fly, 200 fly, and 200 back.

Missouri currently has a very deep butterfly and backstroke roster, though last season’s #2 backstroker Dillon Love will exhaust his eligibility after this current season. Also, when Hein gets to Mizzou, top backstroker and Pan Am’s silver medalist in the 200 back this summer Carter Griffin will be a senior. On the butterfly side of things, the Tigers graduated top 200 butterflier and #2 100 flier Mack Darragh, and last season’s top 100 flier Andrew Sansoucie will be a senior when Hein is a freshman. Hein’s times put him somewhere around the 4th or 5th fastest rank from last season in his four best events.

The Tigers have a very strong team this year with guys like Carter Griffin and Michael Chadwick, who had breakout summers in long course and will lead the team in the small pool. While they lost elite breaststroker Sam Tierney to graduation, the Tigers picked up a Western Kentucky transfer, Fabian Schwingenschlogl, who finished 6th in the 100 breast at NCAAs last season.

Hein will come on board a rising team in the tough-as-nails SEC, and his times right now would’ve put him in C finals of the 100 back and 200 fly at last year’s SEC Championships. He’ll add depth to some very robust fly and back groups at Mizzou, and will add talent to a team looking to make a bigger name for themselves in the NCAA.

“The combination of the great coaching staff and amazing facilities was a definite plus. I really meshed with the guys on the team and had a great feel for the campus. The program has made great strides in the past 5 years and I can only see it continuing upward. Overall, as an athlete I felt like it would be impossible for me to fail there because of all the great resources. I am excited to progress athletically and academically at Mizzou in the upcoming 4 years!”