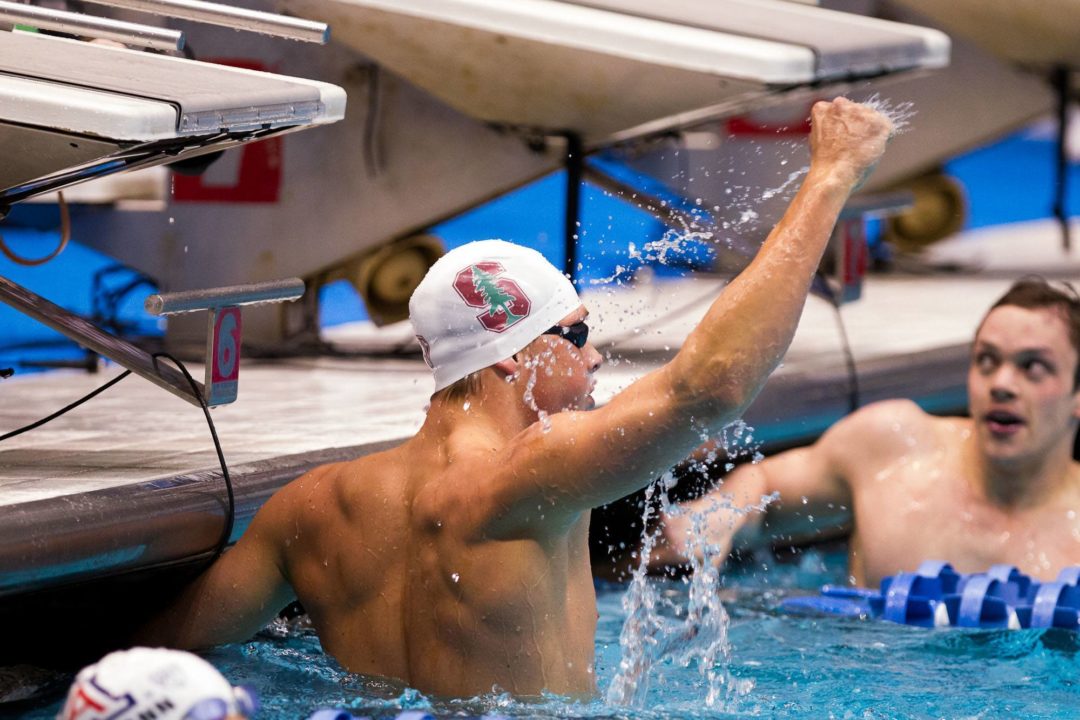 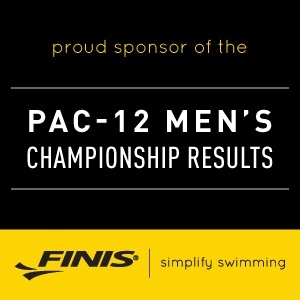 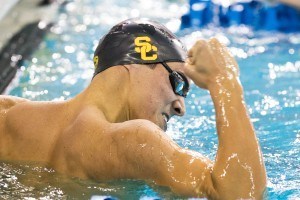 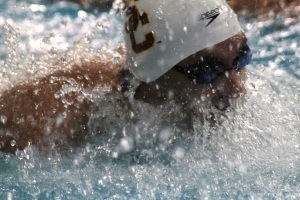 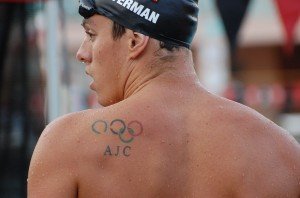 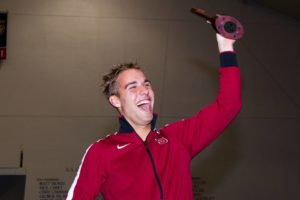 USC amped up the power during tonight’s 500 freestyle final, as they packed a 1-2 punch with Cristian Quintero and Reed Malone taking first and second place in the race.  Quintero’s effort of 4:11.25 scored a new meet record, an NCAA automatic qualifying time and also now ranks him as the second-fastest 500 freestyler in the country.  Malone’s 4:11.30 also cleared the previous meet record (held by Quintero at 4:12.56 from last yer), as well as clears the NCAA qualifying standard.  A swift 37 points to start the night for the Trojans.

Utah’s Bence Kiraly time of 4:14.67 just narrowly missed the 4:14.59 qualifying standard, but seeing how last year’s invite time was 4:18.31, he should make the NCAA meet no problem.  Especially as the time lands him 8th in the country and third in tonight’s race.  Stanford’s Danny Thomson was second out of this morning’s prelims and still dropped about a half second in tonight’s contest, touching the wall in 4:14.98.

Stanford freshman Liam Egan (4:19.65), USC freshman Pawel Furtek (4:17.91) and Stanford senior Drew Cosgarea (4:18.34) finished in 5th, 6th, and 7th places, respectively, while Cal junior Trent Williams represented the only swimmer in the field who added time from prelims to finals.  He finished in 4:23.35 for eighth place.

American, U.S. Open & NCAA RECORD ALERT!!  Congratulations to Stanford’s David Nolan, who brought more than his A-game to Finals tonight, throwing down the fastest 200y IM in history.  In his 1:40.07 stellar performance tonight, Nolan beat Ryan Lochte’s 2007 time of 1:40.08 and also broke Bradley Ally’s (Florida) 200 IM NCAA record of 1:40.49 from 2009.  Additionally, Nolan’s time of 1:40.07 would have won last year’s NCAA Championships by a half a second, beating NCAA champion Marcin Cieslak’s 1:40.58.  Splits from Mr. Nolan’s race are as follows:

In deja vu from last year, Cal’s Josh Prenot finishes behind Nolan for second place with an automatic qualifying and super speedy time of 1:41.79, significantly faster than the 1:43.31 he clocked in the same position in 2014 and better than the 1:43.88 he nabbed at the UGA Fall Invite in December. Teammate Ryan Murphy touched in 3rd tonight in a time of 1:42.94, dropping over half a second from his prelims swim.  Notably, Murphy’s back split was 25.03 to Nolan’s 24.95, just for comparison.

With 5 swimmers in this final, the Cardinal was bound to launch a point assault no matter where the names fell. Junior Tom Kremer touched in 5th with a time of 1:44.48, while Gray Umbach finished in 7th with a time of 1:45.59. Sophomore Max Williamson added about a second to his prelims time to finish in 1:45.88 for eighth.  In the midst of all that Cardinal, USC’s Morten Klarskov gave his team 13 points finishing 6th.

After the stunning swim from Nolan, the 50 free field was pumped up, led by Arizona’s Brad Tandy.  Tandy roared to the wall in an 18.95, to successfully defend his PAC-12 title.  He was the only sub-19 swimmer, as well as the only NCAA automatic-qualifier in the race tonight; he moves into the 3rd-fastest time ranking in the country.   Ironcially, 18.95 is the exact time that earned Tandy the 2014 NCAA title, when he tied with Alabama’s Kristian Gkolomeev.

Tonight, USC’s Santo Condorelli registered essentially the same time as his prelims swim, earning a 19.29 tonight versus his earlier 19.27 to maintain his top 10 time ranking.  Cal senior Seth Stubblefield finished in 3rd in a time of 19.32.

Stanford freshman Sam Perry charged into 4th place with a time of 19.49, which knocks two entire tenths off of his 19.69 morning swim.  Up until today he hadn’t dipped under the 20.0 mark collegiately, so he came ready to play with his 15-point-worthy performance.

The Cal foursome of Fabio Gimondi (19.81), Tyler Messerschmidt (19.19), Ryan Murphy (18.94) and Seth Stubblefield (18.63) combined to swim away with tonight’s 200 free relay victory.  Their time of 1:16.57 out-touched USC’s A team by just over two tenths.  Although their time was swift enough tonight to take first place, there is definitely work to be done if they want to get on the same level as the top 2 teams in the country.  NC State and Alabama lead the NCAA in 1:15.62, 1:16.13 respectively, with three NC State swimmers clocking sub-19 splits.

1:16.88 was good enough for USC to snag second place in tonight’s A-Final, with Santo Condorelli leading off in 19.33, followed by sophomore Dylan Carter in 19.18, then Ralf Tribuntsov in 19.54 and anchored by tonight’s 500 freestyle title winner Cristian Quintero who clocked the only sub-19 split in 18.83.  Wait….what?  The 500 freestyle Pac-12 winner clocked the second-fastest split of the entire 200 free relay field?  Guy has got some major gears!

Is there a way to keep up with the time trials?

They’re on Meet Mobile, if you have that.

too bad there is no video stream.

breaststroke is the most important leg of the 200im. agree or agree?

The trend lately is that backstroke is… the bear IMers have had stellar backstroke splits lately.

Breast is the most important leg of the IM simply because it takes up the most time. For example, a good male IMer might split it like this 22/25/29/25. Breast takes 4 more seconds than back and free, this taking up a larger total % of the entire IM. 15-20 years ago, the IMs were won/lost on the breast leg. Now, that’s not the case anymore. Since the UW kick has transformed fly and back, you can have 3 really fast legs (fly, back, free) and a solid breast leg, and still be a top 10 IMer. I’m talking more SCY swimming than LCM though. Obviously you want to have a great UW kick and great 4 strokes, but not… Read more »

I read somewhere recently that it was the combined time of fly and breast that won IM’s, and you could be a little weak in one as long as you made up for it on the other, but not weak in both. This may have been just for the 4IM and not the 2IM if I remember correctly.

It’s interesting to look at the A-finals for NCAA’s and USA Summer Nationals last year, and see what other stroke each of the swimmers specializes in. Not sure it really answers your question, but it does provide a little perspective.

Finally is right, my GOD he needed this breakthrough so BAD, his potential shown in high school is finally breaking through.