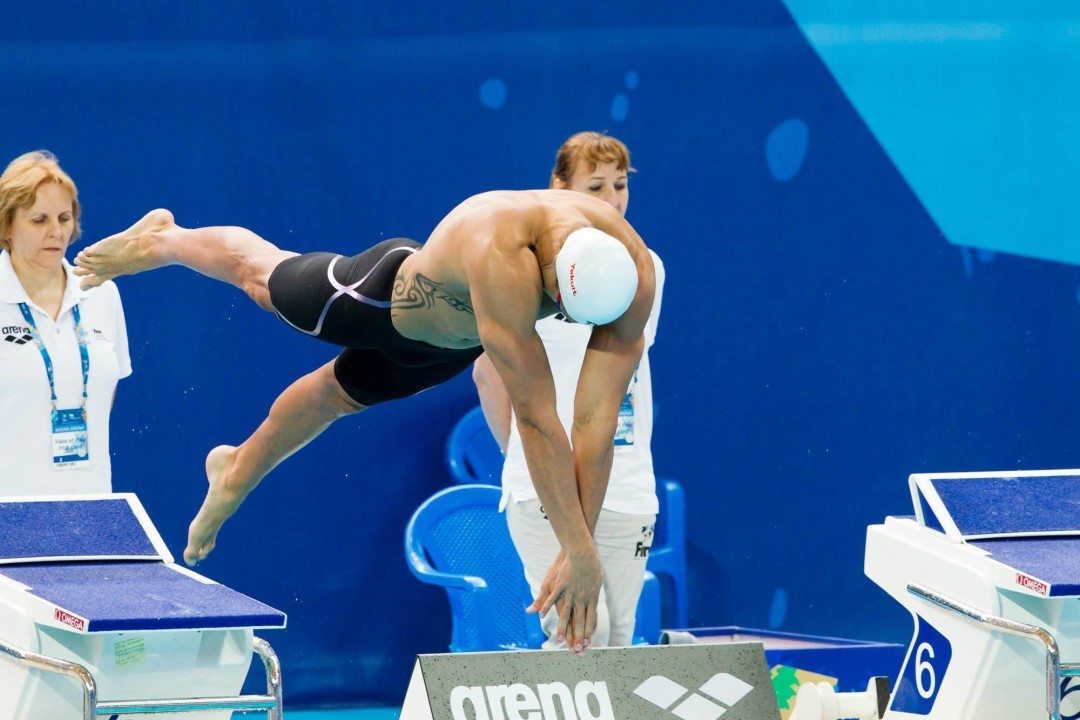 After a no-show in the men's 100 freestyle yesterday, Florent Manaudou made the championship final of the men's 50 breaststroke on Day 3 of the 2015 French national short course championships in Angers. Archive photo via Tim Binning/TheSwimPictures.com

There were a lot of reasons to smile in Angers on Saturday, after a tense week in France. Although most of the elite swimmers of the French national team are swimming through these short course national championships, with the goal of being completely ready for Olympic Trials at the end of March, there was nonetheless some fast racing to be seen in Angers.

Most notably, both Damien Joly of CN Antibes and Jérémy Stravius of Amiens Métropole set meet records on Saturday. Stravius, in particular, is having an excellent meet. He has refocused his training in the months since the FINA World Championships in Kazan, abandoning his signature 100 backstroke and picking up a few new events along the way. He will probably concentrate on the 100 and 200 freestyles at France’s Trials but in the meantime he seems to be enjoying himself with freestyle of all distances, butterfly, and IM. So far, he has won every event his has contested with the exception of the 800 free. In the 200 fly, Stravius dropped 5 seconds and broke the meet record, coming within a second of taking the French national record down as well.

Joly swam in a Stravius-free heat of the 1500 free against Toulouse’s Joris Bouchaut, the winner of Thursday night’s 800 free (in which Joly finished second, just ahead of Stravius). Two days later Joly broke the championship record, covering the final 800 of the race only a second slower than his 800 flat-start time from Thursday’s final.

Joly and Bouchaut got the Day Three final session crowd pumped up with a thrilling 1500. And no, it’s not an oxymoron. Joly came in seeded third with 14:51.05, behind Bouchaut (14:43.55) and Fontainebleau-Avon’s Axel Reymond (14:48.09). Stravius had been scheduled to swim in this event but he ended up scratching.

Mathilde Cini of Valence earned her third straight national title in the 50 backstroke with 27.13. After winning the event in 2013 and 2014, Cini took the 2015 crown by nearly a body length. Camille Gheorghiu of Montpellier was second to the wall in 27.79, just ahead of USA’s Lara Jackson who swims for Vichy (27.86).

Not far behind were Fanny Danet of Rennes (27.89) and Pauline Mahieu of Font-Romeu (28.07). Mahieu broke the national age group record for 16-year-old girls with her swim.

Florent Manaudou won his third national title (he also won in 2012 and 2014) in the 50 breast with 26.80. The sprinter from Marseille had scratched the 100 free on Friday morning and incurred the wrath of his coach, but had been on hand to swim the breast leg of Marseille’s 4×50 medley relay that night.

While the 50 breast isn’t really Manaudou’s specialty, no one can match his start or turn and he ends up getting the job done. This year’s win wasn’t his fastest but it was good enough to take home the gold. Eddie Moueddene of Amiens finished second in 26.95, while Giacomo Perez Dortona, Manaudou’s teammate in Marseille, was third with 27.05.

Manaudou declared, “We wanted to keep the 50 breast title in Marseille because we’ve had it for years. It wasn’t easy with Eddie Moueddene, who has been in great form during this meet. The time didn’t matter to us, we were after the title. This is the race that I’ve enjoyed the most so far in this meet.”

In the morning’s heats, Carl Aitkaci of Courbevoie broke the national age group record for 14-year-olds with 29.52, which qualified him to swim in the C final.

The women’s 100 breast was an exciting final; five of the eight women turned together at the 50 wall, and three finished seemingly at the same time. At the end it was Adeline Martin of Antibes who earned the right to climb to the top step of the podium; she touched at 1:07.87. Camille Dauba of Sarreguemines put together a terrific second half and just out-touched Toulouse’s Adeline Williams for the silver medal, 1:07.94 to 1:08.09.

Clément Mignon of Marseille, who nearly beat his teammate Manaudou in the 50 free final on Thursday, used his strong sprinting form to rise to the top of the field in the men’s 100 IM. Mignon clocked a 52.95, which was exactly 3 seconds faster than his seed time.

Fresh off his silver medal in the 50 breast, Amiens’ Moueddene earned his second of the night with a 53.14, while Mulhouse’s Yannick Agnel rounded out the podium with 54.14. Moueddene improved his seed time by .4; Agnel, by .65.

There were no big surprises in the final of the women’s 100 fly. Nice’s Marie Wattel dominated from start to finish and picked up the title with 58.09, only .29 off her personal best. Justine Bruno of Amiens eked out the silver medal over Lara Grangeon of Font-Romeu, 58.96 to 58.98. Grangeon won the 200 fly with a new meet record on Thursday, beating Wattel by 7/10.

Wattel told the media, “It’s not my best time and I’m not that happy with the way I swam but it’s still a French national title and that’s the most important. I have things to improve.”

Stravius came into the men’s 100 fly seeded fourth with a freshly-acquired PB of 1:56.80, earned at a regional meet in La Roche-sur-Yon in October where he also picked up a PB in the 100 breast SCM. After a very respectable 1:54.0 in prelims, Stravius ripped a 1:51.33 in finals. Not only did he break the meet record, but he also came very close to taking down Franck Esposito’s French national record of 1:50.73 from 2002. Jordan Coelho of Antibes was second with 1:53.39; Thomas Vilaceca from Montauban (1:54.21) completed the podium.

Speaking to the press after his race, Stravius said, “It was a bit of an unknown for me. I don’t know that much about the 200 fly. But Franck was able to tell me where I had made mistakes in my race. I may have the key (to success). Why not take on a little challenge next year, or in two years?” He added, “I am actually quite surprised by my form. It was difficult mentally to come to this meet, and I ached everywhere. What is surprising is that I’m getting better and better.”

While the men’s 200 fly was a hard act to follow, the women nevertheless saved their best race for the last. It was an exciting final and everyone improved on their seed times. Coralie Balmy of Antibes, who finished second to Sharon Van Rouwendaal in the 800 free, had an excellent second half and earned the outright victory with 3:59.57, her first sub-4:00 in a while (Balmy went 3:56.2 at European Championships in 2008). Femke Heemskerk finished second with 4:01.20, but being from Netherlands she was not in medal contention. The silver therefore went to third-place finisher Ophélie-Cyrielle Etienne of Marseille (4:05.16) and the bronze to Grangeon (4:06.78).

Marseille teammates Benjamin Stasiulis and Camille Lacourt fought to the finish of the men’s 100 back, ending the night with a great race for the public to enjoy. This time it was Stasiulis’ turn, and he edged Lacourt 50.83 to 50.89. Amiens’ Thomas Avetand took third, touching in 52.67.

Stravius is really in the shape of his life.
And even if Lacourt is much better in long course, his second place in the 100 back is still a little surprise.

The moral of the story is Stravius can swim anything, where in the world did a 1:51 in a 200 fly come from, he is supposed to be focused on his freestyle, I’m scared for his 200 free.