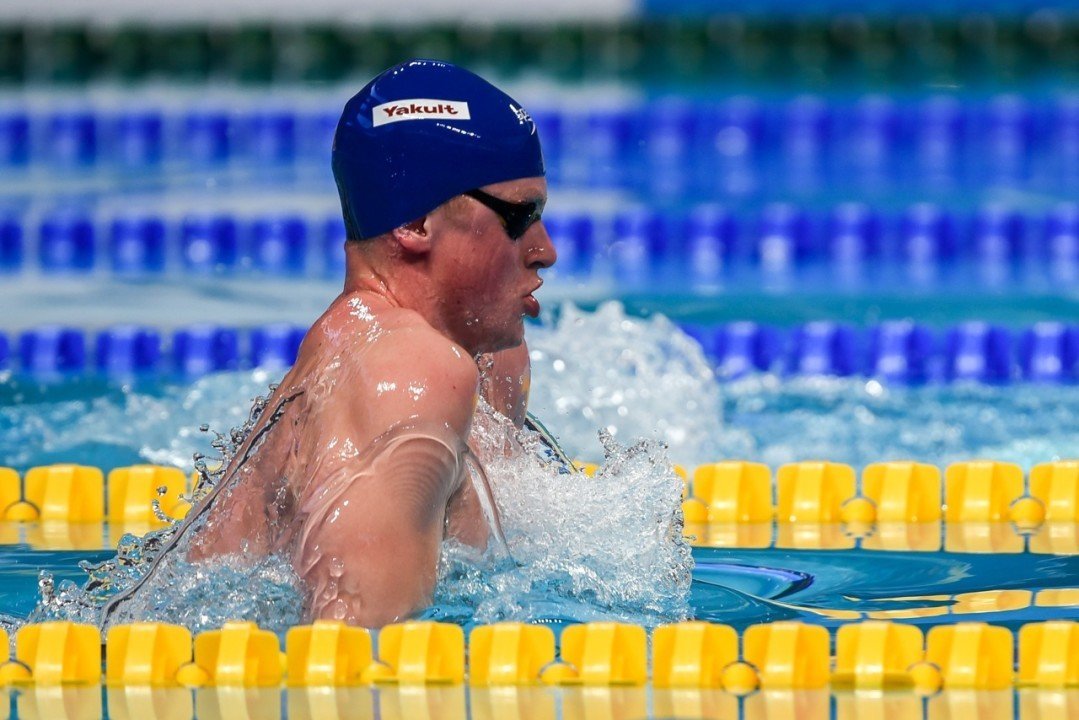 The final stop of the final cluster of the 2015 FINA World Cup Series is already shaping up to be one of the most competitive, even after just the first session of competition.  Below are the highlights of this morning’s races, with finals beginning at 9am EST.

7 of the top 8 men in the 100m freestyle went sub-50, led by Frances’ Jeremy Stravius at 48.94 as the only sub-49er. Other finalists include Velimir Stjepanovic (SEB) who has already collected a few World Cup medals, and back-to-the-pool Frenchman Yannick Agnel who nabbed the 4th seed in 49.85, tied with South African Chad Le Clos.

The ultra-competitive women’s 200m freestyle field revealed a big-time battle between Italy’s Federica Pellegrini and Hungary’s Katinka Hosszu, as both led the field in times of 1:58.62 and 1:58.78, respectively. As suspected, this tight head-to-head type of race is also present in the women’s 100m breaststroke, where Jamaica’s Alia Atkinson registered the top seeded tine of 1:07.35, but just .4 of a second ahead of Turkey’s Viktoria Gunes, who is attending her first World Cup stop.

In the men’s 50m breaststroke, World Record Holder, British swimmer Adam Peaty, threw down a monster 27.11 against a charging Cameron Van der Burgh‘s 27.31. Something special may happen in that final tonight, as the rivalry grows between these two World Championships gold and silver medalists. Peaty also qualified for the 200m breaststroke race, although American Kevin Cordes registered the morning’s fastest qualifying time in a mark of 2:12.97.

Australia’s Mitch Larkin scored a big mark in the 100m backstroke to keep his impressive streak alive, hitting the wall in a 53.74 against the only other sub-55 swimmer, American David Plummer, who touched in 53.81. In the women’s 200m backstroke, world champion Emily Seebohm played it cool in the prelims, registering a time of 2:12.78 for the 3rd seed, while Hosszu nabbed the lane 4 spot for tonight in her mark of 2:10.86.

Of note, Agnel was a “DNS” on the men’s 400m freestyle and, despite being on the entry lists, American Anthony Ervin was nowhere to be found in the men’s 100m free event. Also, young American Michael Andrew managed to make 3 event finals, including the 50m butterfly, 50m breaststroke and 100m backstroke. Quite impressive for the 16-year-old.