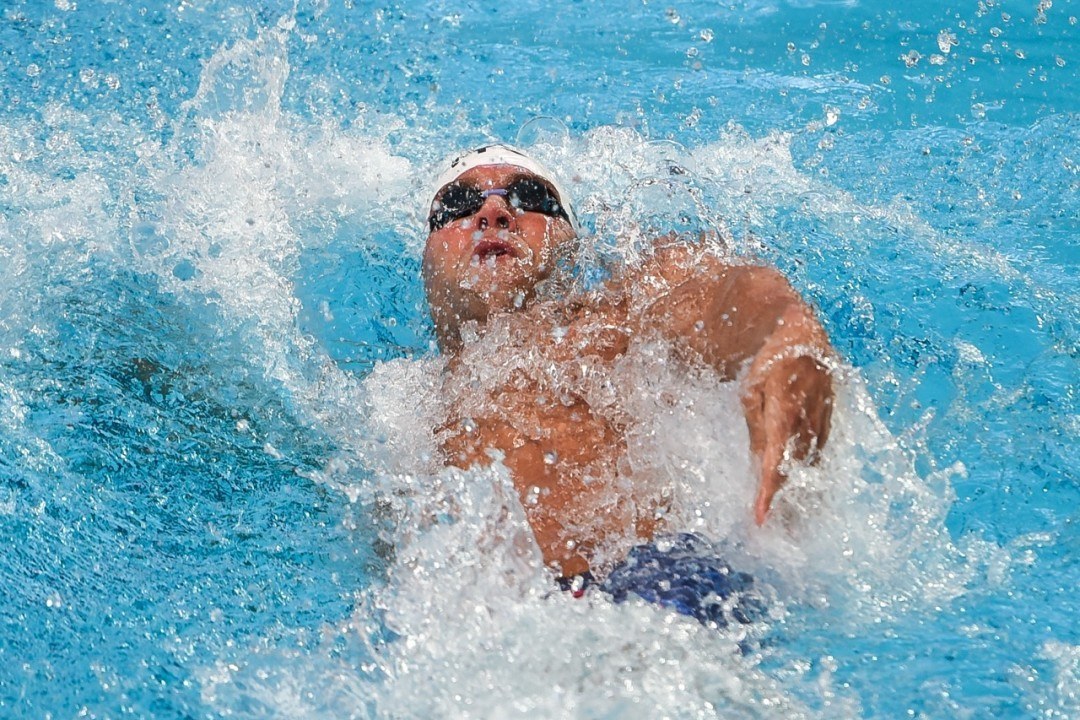 Big man Matt Grevers surged in the final leg of his 200 backstroke during yesterday's finals for Team USA. Today, he'll take on the field in the 100 backstroke, as the U.S. will try to maintain its lead over the Euro All Stars. Archive photo via Peter Sukenik/www.petersukenik.com

*ALL ARE TIMED FINALS

Lotte Friis got out to an early lead for the European All-Stars, but that lead did’t last too long. Team USA’s Leah Smith regained the lead midway through the race and continued to pull away from the rest of the field. Smith easily won the race, picking up seven points for Team USA with her time of 8:10.03. That time is the top time in the world this year.

There was incredible battle for second as Europe’s Boglarka Kapas and Team USA’s Becca Mann passed Friis and went head to head down the final 100. At the touch, Kapas got her hand on the wall to secure second place points for the Euro All-Stars with an 8:12.23. Mann finished third at 8:12.43.

Connor Jaeger took out his 1500m freestyle aggressively to challenge the World Record Holder, Gregorio Paltrinieri, in the front half of the race. It worked well for the first 700 meters, but after that it was an 800 meter shoot-out. Paltrinieri stayed slightly ahead through 1100 meters before Jaeger inched back into the lead.

With 300 meters to go, Jaeger continued to get faster. The beautiful, long stroke he opened the race with disappeared and he gained a powerful gallup. Paltrinieri’s stroke rate was much higher than Jaeger’s throughout the entire race.

With 150 meters remaining, both swimmers came alive! Paltrinieri flipped hundredths ahead of Jaeger. It was an all out sprint that continued to get faster each and every lap. The crowd was on their feet for the final 4 laps and the crowd got just as loud as they were last night during the relays as Jaeger powered away from the World Record holder down the final 25 meters.

Missy Franklin took out the 200 surrounded by two strong European All-Stars. Katinka Hosszu and Siobhan-Marie O’Connor looked like they were about to shut out Franklin after the first half of the race, but a strong third 50 from Franklin changed the mood in the building.

Franklin had the lead into the final 50, but Hosszu was coming back fast strong and nearly out-touched her for the win. At the finish, Franklin managed to sneak her hand on the wall first for first place points and a new US Open record at 1:52.74. She set the previous record in 2011 at 1:54.19. Hosszu and O’Connor finished second and third at 1:52.79 and 1:52.82, respectively.

The 200 freestyle was a great event for the US team, adding 8 points to Europe’s 1 point. Conor Dwyer and Ryan Lochte picked up a 1-2 finish, touching ahead of the 2015 Long Course World Champion James Guy.

It was a quick turnaround for Missy Franklin and Katinka Hosszu after swimming the 200 freestyle less than 15 minutes prior. They both struggled a lit bit, both missing the top three in the event.

Courtney Bartholomew stepped up for Team USA, however, winning the event with a new American record of 55.92. Mie Nielsen finished second for the Euro Stars at 56.20, and hometown swimmer Claire Adams picked up third at 56.45.

After breaking the US Open last night leading off the men’s medley relay, Matt Grevers can add another World Record to his resume! Grevers was phenomenal during today’s individual 100 backstroke, lowering Nick Thoman‘s world record from 2009 of 48.94. That time also lowers the American and US Open Records as well.

Arkady Vyatchanin picked up second place points for the European All-Stars with a 50.37 and Eugene Godsoe finished third for Team USA at 51.08.

It was a great race between Team USA’s Katie Meili and Europe’s Yuliya Efimova! Meili had the lead at the half way point, but a strong finish from Efimova gave the European All-Stars the upper hand, winning the event 5 to 4. Efimova touched with a final time of 1:03.19, just .01 ahead of Meili at 1:03.20. Jessica Hardy picked up third place points with a 1:05.47.

Cody Miller finished with his second American record in as many days, winning the 100 breaststroke with an impressive 56.43. Miller dominated the race from start to finish, posting the fastest splits both in the first and final 50’s.

Daniel Gyurta and Craig Benson picked up second and third place points for the European All-Stars, touching at 57.11 and 57.97, respectively.

The 200 butterflies proved to be a great event for Team USA for both the women and the men. Cammile Adams powered through the back half of her 200 butterfly to earn the win and break the American record with her time of 2:03.39.

Franziska Hentke secured second place points for Europe with her time of 2:03.74, and Hali Flickinger finished third for Team USA with a time of 2:04.72.

Shields broke his own American record and Laszlo Cseh‘s US Open record with his time of 1:49.05. Viktor Bromer finished second in 1:52.39 for Europe and Clary held off Varraszto for third with a 1:54.74.

After the men’s 200 butterfly, Team USA clinches the meet with 132 points. The Euro All-Stars trail with 80 points. PDF Results

Even though it was too late to make a difference in the outcome of the meet, Ranomi Kromowidjojo and Jeanette Ottessen held of the American sprinters to earn 8 points for the European Stars. Lia Neal earned the only point for Team USA With her third place finish at 23.95.

Kromowidjojo not only won the event, she also tied her own World Record time with an impressive 23.24. Ottesen was second at 23.49.

Nathan Adrian managed to hold off the field in the closest race of the meet. Adrian finished with a final time of 20.95, touching just ahead of the rest of the field. Every other swimmer in the field finished between 21.09 and 21.17. Vlad Morozov had the second fastest time, picking up 5 points for the Euro Team at 21.09. Josh Schneider earned the final point in the event for Team USA with his time of 21.10.

The women’s 200 IM was another momentous event for the European team. Katinka Hosszu added another US Open record and event win with her time of 2:03.66. She pulled her teammate, Siobhan-Marie O’Connor to second place at 2:05.19. Melanie Margalis earned third place points for Team USA with her time of 2:06.34.

It was almost a 1-2-3 sweep of the men’s 200 IM for Team USA. Ryan Lochte, Josh Prenot, and Conor Dwyer touched first through third, but a disqualification left Prenot the champion in the event with his time of 1:53.09. Dwyer finished second at 1:54.21 and then Dan Wallace finished third at 1:55.18.

Team USA closed out the meet with a final victory, breaking the American and US Open records. The team of Josh Schneider, Matt Grevers, Michael Chadwick, and Nathan Adrian combined for a final time of 3:05.42, beating the Euro All-Stars with their time of 3:08.32.

Did Lotche DQ on purpose or does he really forget how to make a legal turn? US coaching might want to look into that before Rio.

Number of medallists from 2015 world championships who competed here:

I think that the US had home advantage (no jetlag) and was missing less of its top swimmers.

Are you serious? Did you even read my comment?
Europe had less of ITS medallists from 2015 world championships not less IN TOTAL … (thats what you couldve found out by actually reading my comment)
Mcgillrocks asked why american women got beaten by european women, while american men won against european men.
A possible explanation: Europe was missing more of its best athletes on the mens side.

Lol. You are ridiculous. WHO CARES ABOT PERCENTAGES. Europe had MORE medalists. That all there is too it. You are insanely biased it’s crazy.

I agree with your central point that the meet results aren’t necessarily indicative of anything. Both teams were missing lots of talent and results in the SCM format are largely meaningless in predicting LCM results. On the other hand, I don’t think it’s fair to downplay what was clearly a good performance by a not full strength US team. After all, prior to the event most commentators favored the European team or at least predicted a very close meet based on the lineups. Certainly very few predicted that the US would destroy the Europeans as happened. The fact of the matter is that the US showed up mostly ready to race while the European team looked tired. I’m not sure… Read more »

Miller and meili should be DQ. Both of them do extra dolphin kicks then are legal. And btw I am an American.

Yes, and I’m already concerned about him having an unfair advantage over his competitors come trials, and the prospect of him getting our relay DQed at the Olympics!

The US Men’s team has never even been closely contested in this meet. They have steamrolled the opposition every time and sometimes had to make up for their female counterparts. However the women’s team has been outscored several times now.

Thoughts on why that is?

You aren’t wrong, but the US lost to the Aussie women in 2007 and were beaten rather soundly in 2013, and Katinka wasn’t present there. The women’s team’s depth seems substantially weaker than the men’s over a long period (7 Duels now).

The womens side was decided on the final relay. Hosszu was enough to make the difference. The men seem to dominate because they get a lot of 1-2 finishes which is huge in this format. I think the Euro women overall raced a little better, better turns and their second place swimmer beat our second place swimmer a lot but actually it was pretty even meet.

Looks like I’ve missed some great races on that day 2.
I’ve just read the results and it’s cool to have world records.
Can’t wait to watch the races tomorrow.

Matt Grevers is really the MVP of the meet.
He sent a message to Larkin.
Most of the Europeans looked tired and were clearly not at their best.
Some Americans were not much rested.
I don’t care at all about the team results of that meet but it’s a fun meet to watch.
Congrats to the US team.

Did the Europeans win anything?

They won the women’s 400 free relay and the W100 breast. I think I also heard their women scored more points overall, but I can’t confirm.