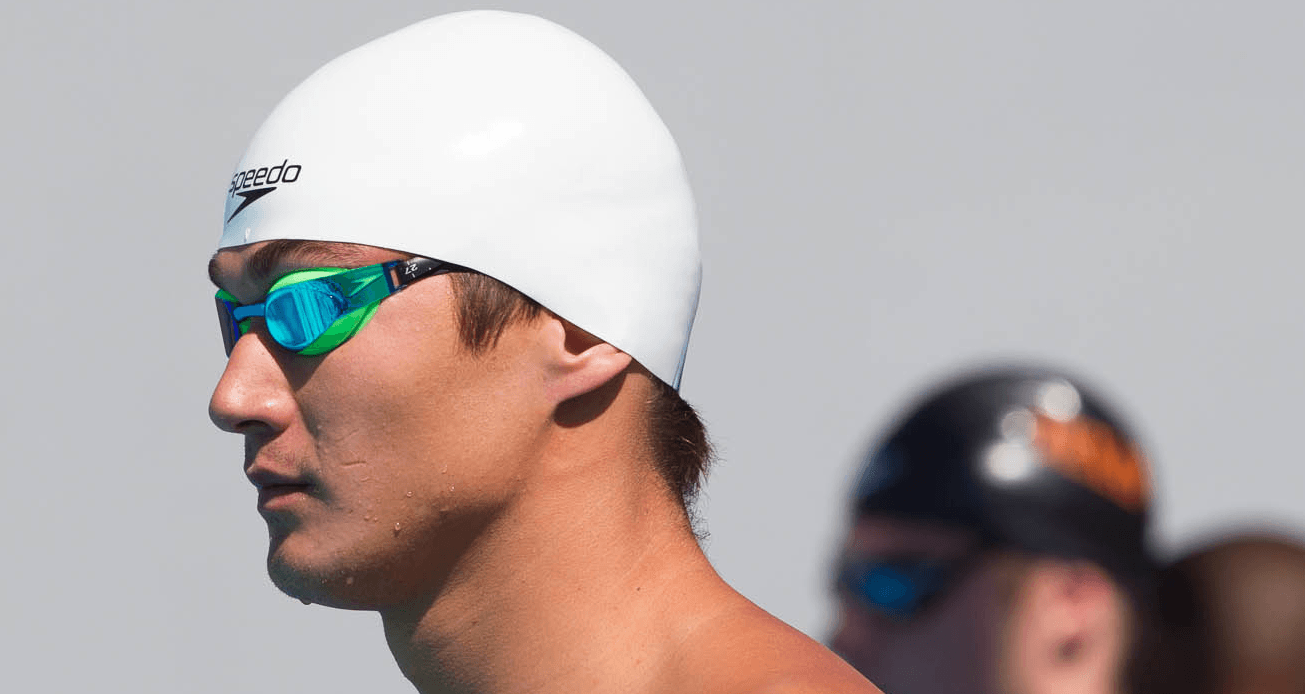 Nathan Adrian, after a successful short course yards season, will get back into long course swimming early in 2015, swimming the 100 free on Thursday morning. Archive photo via Tim Binning/TheSwimPictures.com

Day 1 of the 2015 Pro Swim Series in Austin, Texas (formerly the Austin Grand Prix) will begin with an exciting 100 freestyle, which on the men’s side will include a lot of standard, veteran pros like Nathan Adrian, Matt Grevers, Jimmy Feigen, and Anthony Ervin; as well as some more interesting but less accomplished names like Marcelo Chierighini, Yuri Kisil, Ryan Murphy, and Seth Stubblefield.

American distance star Katie Ledecky continued to show improved speed with a 54.89 to take the top seed in the women’s 100 free prelims. That’s a new lifetime best, improving upon the 54.96 that she swam at Nationals over the summer.

She leads an impressive and talented (if yet unfinalized) A-final for tonight. Katinka Hosszu was 2nd in 54.93, and Megan Romano, in her first meet training with the home-team Longhorn Aquatics, is 3rd in 55.27.

The gap opened up after that, with Arianna Vanderpool-Wallace sitting 4th in 55.89, and NBAC’s Allison Schmitt taking 5th in 56.04. Collegians Nathalie Lindborg (56.32) and Farida Osman (56.49) were 6th and 7th, respectively, in prelims.

The 8th-spot will have to be decided by a swim-off after a tie between Mission Viejo, California high school star Katie McLaughlin and Canadian Hannah Riordan in 56.51.

Of note, in the prelims, Natalie Coughlin and Margo Geer were both scratches.

The men’s 100 free prelims didn’t heat up quite as much in prelims as the women’s race did, but Tucson Ford pro Matt Grevers had a nice 49.70 to take the top seed. That’s the fastest that he’s been at a non-National Championship meet since 2010.

In the 2nd and 3rd positions behind him are Cal sophomore Ryan Murphy (50.08) and Texas freshman Joseph Schooling (50.12), who are former high school teammates at Bolles in Florida. That puts both swimmers about a tenth-of-a-second away from their respective personal bests – which is good news for fans of their respective college teams.

While both swimmers are primarily strokers (Murphy backstroke, Schooling butterfly), both teams will need them to fill the Tom-Shields-esque “any day, any relay” role to lock up an NCAA title in March.

Hong Kong/Club Wolverine pro Geoff Cheah swam a 50.19 for the 4th seed. He’s still relatively new to the Club Wolverine crew, but that’s already close to his in-season best. It appears, based on recent results, that at 24-years old, Cheah’s best swims are still ahead of him.

From the Brazilian contingent, Bruno Fratus swam a 50.52 for the 11th seed. That’s a good swim as he tries to adopt to the longer 100 freestyle for the benefit of the Brazilian relays heading toward the Rio Olympics. His country mate Marcelo Chierighini was a no-show (along with Matt McLean and Dax Hill).

Anthony Ervin will have the option to swim in the C-Final after a 51.08 in prelims, and Canadian rising star Yuri Kisil will do the same with a 51.35.

Showing the incredible depth of this meet, some big names (Austin Surhoff, Frank Dyer, Jeremy Bagshaw, Brett Ringgold, Russell Wood) will wind up in the D-Final tonight. It took 51.78 to place in the top 32 this year, as compared to just a 53.17 last year.

Cal Sophomore, Marina Garcia, is this morning’s top seed coming out of the women’s 200 breaststroke prelims.  Her time of 2:28.76 positions her nicely atop a competitive final, which includes Breeja Larson in 2:29.18 and Micah Lawrence in 2:29.97.

Garcia wasn’t great in short course yards in her first season at Cal, but showed over the summer that her long course swimming, which is important to her Spanish federation, continues to advance, which she is showing again this year. She’s carried that over into the short course season (she was a lifetime best in the 100 and 200 yard breaststrokes at the UGA Invitational in December) and is continuing that here in Austin.

Canadian National Teamer Tera van Beilen will be center-stage in the B-Final after a 2:32.86 in prelims.

Cal undergrads continue to excel in the first session in Austin, as Josh Prenot took the top seed in the men’s 200 breaststroke in 2:15.15 ahead of high school senior (and future Cal Golden Bear) Andrew Seliskar in 2:15.92.

A couple of international swimmers came in behind them – former Incarnate Word NCAA D2 star Thiago Parravicini took the 3rd seed in 2:16.33, followed by Alabama’s Anton McKee (2:16.58). Stanford post-grad BJ Johnson is the 5th seed in 2:17.36 and at 27 will be the oldest swimmer in the A-Final.

Opposite of him tonight will be 15-year old Michael Andrew, the youngest swimmer in the B-Final, who took the 6th seed in 2:17.73. That’s a new lifetime best for him by a full second.

Katie Ledecky swam sub-4:05 in the 400 free for the 13th time in her still-young career with a 4:04.36 in prelims of the women’s 400 free. She still sits behind Italian swimmer Federica Pellegrini and now-retired Frenchwoman Camille Muffat, who have each done so at least 16 times, but Ledecky is almost a decade younger than both of those swimmers.

The time put her well-out in front of the field that once again had Katinka Hosszu sitting as the 2nd seed in 4:10.75, with Texas A&M redshirt senior Sarah Henry sitting 3rd in 4:13.67. That swim for Henry is right-in-line with what she did at this meet in 2012 – a season that Henry redshirted to recover from an injury and focus on long course, but also a season in which Henry had a very good long course summer.

Elizabeth Besiel is the 4th seed in 4:13.79, and there was another big gap after that to Canadian teenager Emily Overholt in 5th in 4:16.61.

Based on history, Jaeger will be the favorite in that final, but the intrigue lies in Dwyer with his new training location at USC. The 3:52 is already a very good time for him this early in the season. He should be able to chase the clock a little lower (both he and Jaeger looked like they weren’t pushing too hard on the back-half).

Bobby Hurley took 3rd in 3:53.97, followed by Michael McBroom – who represents the Woodlands Swim Team, but trains in the Texas Swim Center pool.

Another race, another great swim for a Cal undergrad, whose women’s team, even with primarily just their international swimmers at this meet, took two out of four top seeds on Saturday.

This time it was Canadian-born freshman Noemie Thomas taking the top seed in 58.70. That’s close to what she swam in prelims in Austin last year (before going to Cal), making 58.54 the benchmark target in finals.

U.S. National Teamer Katie McLaughlin is the 2nd seed in 59.79, though those were the only two to break a minute.

While there is some good young talent in this race (the top 7 are all teenagers), the Grand Prixs continue to highlight how thin the U.S. is in the women’s butterfly events as compared to some of the other races. Seeing a young swimmer like 15-year old Cassidy Bayer (1:00.15) or 16-year old Victoria Edwards (1:00.50) starting to break a minute on a regular basis mid-season would go a long way to assuaging those concerns.

With the top seed, and defending U.S. National Champion, Tom Shields no-showing his 100 fly prelims swim, Texas’ Jack Conger took the top seed in 52.64 in the men’s 100 fly. That just misses his lifetime best of 52.51 done at the 2013 World University Games, as Conger continues to bounce back from a challenging freshman season.

Andrew Seliskar added another 2nd-place finish, with a 53.09 in the 100 fly to go with the same position in the 200 breaststroke earlier in the meet.

Looks like a lot of swimmers entered are just coming off altitude: Coughlin, Dwyer, Greevers, Adrian.

I’ve just seen that Allison Schmitt continues to swim the 400 free. Unfortunately.
4.22.64 in prelims.
I wonder why she insists. Not very good for the mental to drown like that for such a great champion.

And tough morning for 2 heroes from last US junior short course nationals.
Taylor Ruck 33rd time in the 400 free in 4.24.
Sean Grieshop 28th time in 4.01.
Hard LCM transition or have just started another big training period. Or both.

I heard that UT is in full training mode, possibly including SUV (tires only), but not between prelims and finals…only after finals, but no later than 2am.

Anyway, since all the time I read swimswam comments, I’ve now understood that absolutely no swimmer is ever rested or tapered. All are always in full training period. Even when they break world records.

Their training sure worked against the gators at NCAAs last year. I thought you all were supposed to win it all after storming through the SEC? Clearly picked the wrong time to lift your tires and trucks……

It only took about 40 comments for the first

I heard Phelps is at the meet. He can’t swim – why is he at the meet?

College swimmers from Cal or Texas look very well rested.
They swam close to their LCM best times in prelims. In January. Not bad.

Texas guys are not rested. They were still doing their winter training this week with 2 a days and weights.

You’re probably much more informed than me so I believe what you say.
I only notice that Murphy, Schooling (100 free) and Conger (100 fly) swam close to their best LCM times. In January. During the short course season. And in prelims.

They just flipped the pool into long course this week so they did this past week of training in meters for the first time all season. You would figure they would be even more beat up from it.

0
0
Reply
Cut to the Chase
Reply to  bobo gigi

A lot of similarities with the meet of last year. Except that Hosszu wasn’t in Austin in 2014.
Interesting comparisons. Or not.

Very good comparisons here . So Adrian is on his normal level , Ledecky is allready faster and Seliskar as well . Very interesting finals tonight .

so she improved 6.14 from heats to final last year. if she improves the same amount this year she will be at 3.58.22 in the final which i doubt she will in january. i think she will be slightly over 4 minutes this evening, still a scary time for her competitors. i am more interested to see if she can go 54 low in the 100 free.

Dear Thanos Mihas , concerning ledecky improvement of the day , it was about the 100 free of course , not the 400 free . That’s where she is getting real improvements since last summer / she is allready a beast on the 200 so why not the 100 as well .

How can you say that she’s not tall or strong enough to compete when 1. She just turned 16 and 2. She continues to improve every season. You can’t just say that someone isn’t capable of something because of their size, especially in swimming. Thinking that there are certain body requirements to be a great athlete is just ignorant.

There was a song from the band talking heards years ago : ” psycho killer ” . Maybe that’s what he wants to be .