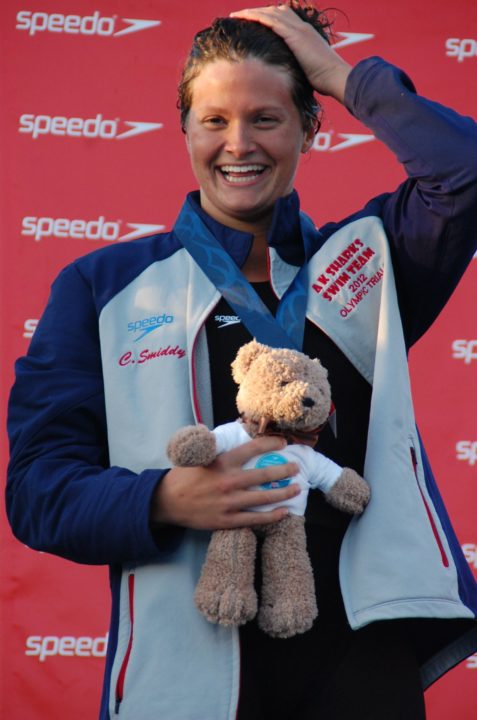 After setting a new meet record in the 100 backstroke, 17 year old Clara Smiddy will look to double up tonight in the 200 backstroke. Current photo via Anne Lepesant

With five incredibly fast sessions of swimming in the
books, filled with new championship records National Age Group
records, the 2013 Winter Junior National Championships returns to
Greensboro for one final night of swimming. After missing
yesterday’s final sessions with breathing
trouble, Caeleb Dressel will
return to the pool, looking to break David Nolan’s 17-18 National
Age Group record in the 100 freestyle.  On the women’s
side, Clara Smiddy and 15-16
NAG record holder Kylie
Stewart will face off in the 200 backstroke.
Follow along at the links below:

Top
seed Leah Stevens left
little doubt as to the best swimmer in this field was, building a
10+ yard lead early that she held in control for the final half of
the race.  The National Junior Team member from Lakeside,
Kentucky primarily held between 29.5-29.7 over the first 900 yards
before fading a bit towards the end to finish in 16:19.29 for her
first win of the weekend.  With lifetime bests of 4:43.10 and
16:07.77 in the distance freestyles, Stevens will be one of the two
or three most sought-after distance swimmers in the class of 2015.
The second place finisher
was Sandra Soe of Santa
Clara Swim Club, who actually out-split Stevens over the back
half of the race and cut over 13 seconds off her seed time
from lane eight of the final heat, touching in 16:24.35.
Amanda Richey of Boulder
swimming was third in 16:26.45.

Through the first 500 yards, it
looked like we would have a great three-man race on our hands,
with Kevin Litherland, Townley
Haas, and Jonathan
Roberts turning within three tenths of each
other at the 500 mark.  Litherland had other plans though,
breaking away over the next 500 yards and riding his momentum the
rest of the way, touching in 14:58.77.  That final time–a 21
second drop–will get the coaching staff at the University of
Georgia even more excited over next fall, when the Litherland triplets will arrive in
Athens. While he didn’t quite replicate the magic from his 500 freestyle two
nights ago, Haas had a very good swim for second, cutting
over ten seconds from his previous best to finish second in
15:06.13.  Roberts, a Texas Longhorn signee, also posted a
best time in this race, clocking in at 15:10.15.
Notably Matt Bekemeyer of
SwimAtlanta had a great swim in the early heats, cutting more than
20 seconds off his best to finish fourth in 15:10.71.

Turns out there wasn’t much of
a race here.  After breaking the meet record in the 100
backstroke last night, Clara
Smiddy continued her career meet with a
dominant, wire-to-wire victory in the 200.  Her final time of
1:50.59 easily cleared the previous meet record of 1:53.16 from
Courtney Bartholomew, and makes her the third fastest
pre-collegiate performer of all time, behind only
Elizabeth Pelton (the American
record holder in the event) and Missy
Franklin (the world record holder in the 200
LCM backstroke). Kylie Stewart of
Dynamo, the 15-16 National Age Group record holder in this event,
also cleared the previous meet record in her second place effort,
finishing in 1:53.12.  15-year-old Claire
Adams of the Carmel Swim Club (one of the
top-performing teams throughout the meet) dropped well over a
second from her previous best time to finish third in 1:54.13.
Smiddy’s future Michigan Wolverine teammate Hannah
Moore–who also won the 500 free earlier this
week–touched fourth in 1:54.72.  Between Smiddy, Moore, and
distance specialist Gillian Ryan,
the Michigan Wolverines have signed a great recruiting class
for 2014, and look like they’re are on their way to building a
women’s program that will become more and more competitive in the
coming years. Further down the list,
14-year-old Erin Earley cut
nearly three seconds from her prelims time to win the C-Final in
1:55.75, the fifth fastest time in the entire field, and sixth
fastest swim all-time in the age group.

Tristan
Sanders, another future Michigan Wolverine,
reeled in Ethan
Young and Hennessey
Stuart over the second half of this race to
sweep the backstroke events, taking three seconds off his seed time
to finish in 1:42.50.  With that time drop, Sanders is
currently the second fastest prep swimmer in the country, behind
only 2015 top recruit Andrew Seliskar of Nation’s Capital. Young
set the pace early out of lane 1, turning at the 100 mark in 49.19,
but fell off over the final three lengths, settling for third in
1:43.06.  Although he didn’t get the win, there are a couple
big silver linings in that swim for Young.  The 15-year-old
from Carpet Capital Aquatics dropped more than 3.5 seconds from his
previous best, and that finals swim makes him the second fastest
performer in history in the 15-16 age group.  He has another
full year to make a run at the record, but it will definitely be a
tough task; the standard, set by Ryan Murphy back in 2011, is
1:40.90. Stuart (1:42.75), an NC State signee, also closed well,
but couldn’t hold Sanders off.

After taking the 50 free title
on Thursday night, Abbey
Weitzeil of Canyons
Aquatics claimed her second event
win of the meet with a scorching 47.78 in the women’s 100
freestyle, easily lowering her own meet record (48.45, set this
morning).  With her performances this weekend, Weitzeil has
clearly established herself as the top sprint recruit in the
country in the Class of 2015.  She now stands as the #6 age
group performer all-time in the 50 freestyle, and #4 all-time
in the 100 freestyle. Fresh off her meet record in the 200
backstroke, Clara Smiddy seemed to recharge enough in her 20
minutes between events to finish second in 48.97.  Future
Stanford Cardinal Lindsey Engel touched third in
49.15.

Caeleb
Dressel was forced to miss last night’s evening
session due to lung trouble, but that didn’t stop him from coming
back tonight to win the men’s 100 freestyle in 42.85.  Despite
being a new meet record (breaking Vlad Morozov’s 43.27 back in
2009), given his sub-19-second swim on night one, Dressel’s 42.85
might seem like a bit of letdown on the surface.  Considering
the circumstances, however, having the guts to take the race out in
19.99 and hold on is incredibly impressive. Future USC
Trojan Dylan Carter capped
off a great meet with a second place finish in the 100 freestyle,
also clearing the old meet record in 43.07.  That swim puts
Carter as a candidate to be immediately placed onto the Trojans’
freestyle relays next semester.  If Carter can duplicate or
improve his times in March, a relay team of
Carter, Santo Condorelli, Cristian
Quintero, and Dimitri
Colupaev should be in great position to repeat
as NCAA Champins in 400 free relay. 15-year-old third place
finisher Ryan
Hoffer continued his record-breaking ways,
taking down Dressel’s old 15-16 National Age Group record with a
time of 43.13.  For a more in-depth look at that swim, check out
our dedicated write-up here. Down in the
C-Final, Michael
Andrew touched in 44.85, just 0.04 off of
Hoffer’s National Age Group record of 44.81.  Andrew is now
the second 13-14 in history to break the 45-second barrier.

15-year-old Kennedy Lohman of the
Lakeside Swim Team pulled away from the field over the final
50 for the win, cutting more than three seconds off her lifetime
best to win in 2:10.87.  That swim puts Lohman top ten
all-time in the age group, with another full year to make a run
at Caitlin Leverenz’s National Age Group record of 2:08.11.
100 breaststroke champion Lillia King of
the Newburgh Sea Creatures took second after leading the first half
of the race, touching in 2:11.17. Maija
Roses of SwimMAC finished third in 2:12.00.

Curtis
Ogren of Palo Alto Stanford Aquatics led from
start to finish, coming in at a lifetime best of 1:57.64 for his
fourth individual win of the meet.  With his win here and his
top eight finish in the 200 backstroke earlier tonight, Ogren
locked up the male high point award for the weekend.  Ogren
actually won this from lane eight; he was the second overall seed
coming into the meet, but was looking to conserve his energy in the
morning session, as he has done all week. Thomas
Brewer (1:57.73) of Current Swimming
and Matthew
Whittle (1:57.75) of the Davis Aquadarts
nearly came back on Ogren for the win, but finished second and
third, respectively. Gunnar
Bentz, the top seed coming into this weekend,
rebounded from a disappointing morning swim to win the B-final in
1:58.56.

It took breaking her own meet
record to do it, but Megan Kingsley
(1:55.26) of Mount Pleasant held off
Madison Wright (1:55.30) of
Kingfish Aquatics to defend her Junior National title.
Both swimmers were under Kingsley’s record from 2012 of
1:55.50, with the reigning champion building enough of a lead over
the first 150 (1:24.52 to Wright’s 1:25.16) to hold off Wright. In
a quick turnaround from her third place 100 freestyle,
Lindsey Engel came back to finish
third again here, touching in 1:57.86.

Courtesy of some great
underwater work, Robert
McHugh of the Baylor Swim
Club dominated the final
individual event of the weekend, finishing 2.5 seconds ahead of the
field in a time of 1:43.64.  McHugh, a future Tennessee
Volunteer, also easily cleared the old meet record of 1:44.46, set
back in 2010 by Will Hamilton, the 2012 NCAA Champion in this event
(not a bad track for McHugh to be following). Mick
Litherland from Dynamo cut two seconds off his
previous best for second, touching in 1:46.01.  17-year-old
Princeton signee Zachary
Buerger took four seconds off his seed time
coming into the meet for a third place finish (1:46.35).

SwimMAC Carolina led the way from the beginning thanks to a 48.80 leadoff leg from Kathleen Baker (the fastest in the field), as four teams broke the previous meet record in the final women’s relay of the meet.

Scottsdale Aquatic Club, highlighted by a 43.97 second leg from Nicholas Magana, touched in 3:00.22 for second place. Ryan Hoffer led off for Scottsdale, but was only 44.47 after recording a 43.13 earlier in the session.

Without the services of Caeleb Dressel, the Bolles School Sharks finished third in 3:01.32. If Dressel were healthy enough to compete, it’s safe to say that Bolles would have easily come away with the win.

And monster 1.50.59 for Clara Smiddy who wins the A-Final!
She’s more and more impressive.