2013 US Worlds Trials Preview: A Dozen Names for Half a Dozen Spots in the Women’s 100 Free 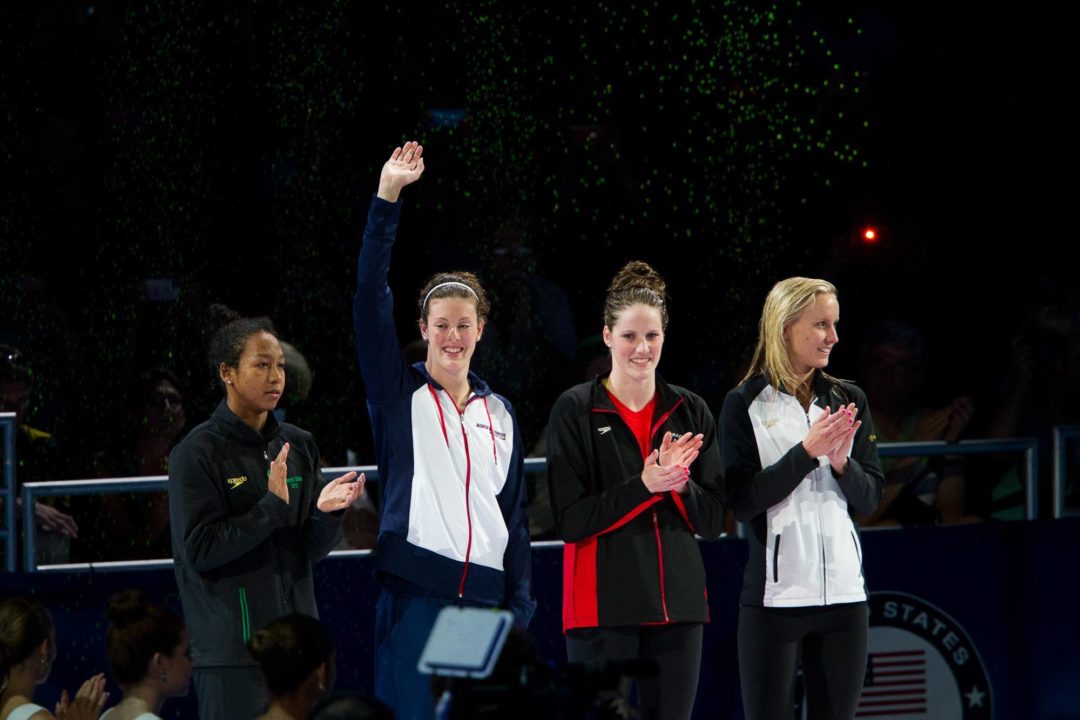 There is little consensus about the favorites in the women's 100 free except that it should be a crazy, unpredictable race. (Photo: Lia Neal, Allison Schmitt, Missy Franklin, Jessica Hardy, Courtesy Tim Binning/TheSwimPictures.com)

The proposal would see coach and athlete representation be equal in the USA Swimming House of Delegates, a chance to the initial proposal from April.

The 100m freestyle is the second individual women’s event in Indy. Powerhouse names like Franklin, Vollmer, Schmitt, Hardy and Coughlin, hungry up and comers Romano and Weir, will others like American record holder Weir look to get back to “super-suit” era speed, will mix it up in Indy to decide who takes the six coveted tickets to Barcelona.

Will Missy Franklin build on blistering 50m times this year to improve on her somewhat disappointing London individual event result? Will ageless veteran Coughlin add to her dump truck full of international medals with a relay spot? Can Romero improve further on her win in Santa Clara to get an individual spot on the Worlds team?

No big surprise here. Colorado Stars’ Missy Franklin comes in as the top seed at 53.52, which was swum as the lead off for the 4x100m in London, where she placed 5th in the individual event. Her 50m has improved markedly this year, dropping nearly half a second from the time she posted in London, which should make for some scary front end speed once she is full rested and tapered.

Megan Romano, of the Athens Bulldogs, is looking to ride the momentum of a strong NCAA season and a win in Santa Clara. Getting time in with some guy named Bob Bowman and NBAC in preparation for Trials can only help her. She upset the field in Santa Clara, beating both Franklin and Coughlin in a time of 54.16. She had a good year with Georgia this year, helping them win the NCAA title, including a NCAA record in the 4×100 free relay.

Trojan Jessica Hardy posted a 53.86 in London, making her the second fastest American in the event in the past two years. At Santa Clara she admitted that she is more focused on breaststroke events this year, particularly the 50, in which she holds the world record.

NBAC’s Allison Schmitt is more known for her 200 and 400 free, but in London she cranked out a 53.5 as the anchor of the 4×100 free relay. Schmitt will be looking to set the tone for the rest of her events with the 100, and also to get one of the coveted top-6 relay spots.

Cal’s 30 year old Coughlin will be trying to make the team on the relay as well. She swam a very solid 54.33 in Santa Clara. With a focus on the sprint events, and a curious eye towards Rio, Coughlin will be looking to add to her extensive collection of international medals with a relay spot. The time she put up in Santa Clara was the fastest she has been in 5 years. Cal teammate Dana Vollmer hasn’t been able to get back into the 53’s since 2009-2010. She’s changed up her training this season, backing off and going to singles for the first time in her career. It will be interesting to see how this affects her racing once she is rested and tapered.

Amanda Weir of SwimAtlanta is the owner of the American Record of 53.02, but hasn’t been under 54 seconds since then. The fastest 100 she put up this year was a couple mid-56’s in Charlotte and Austin. Stanford prospect 18-year-old Lia Neal, of Ashpalt Green Unified Aquatics, will also try to add to her Olympic experience in 2013 with another relay spot. Her best time of 54.15 puts her right in the hunt.

The opportunity for a big breakthrough comes via 16-year-old Simone Manuel of First Colony. She will be looking to improve on the 54.60 she swum at Pan Pac Jrs last summer, which was almost a full second faster than what she swam at Olympic Trials earlier in the summer.

you really think they will go 6 deep?!? I would not want to be 6th in the 100 or 200 frees this year and thinking I was going to Barcelona. I am not sure 5th’s are a sure thing.

I truly think Megan Romano is going to surprise everyone for the 1st spot !! Caughlin might be very dangerous as well , Missy in the middle for the battle .

This would not be a surprise. Missy, Megan, and Natalie have been the most consistent and seemed to be in the best shape for most of the year (compared to the returning veterans). The door is wide open between the rest of the veterans and the up and comers.

USA badly needs big specialists and new faces in this race.
I’m tired to always repeat the same things about Miss Romano but she could be in the top 3 of world women’s sprint if she was focused only on that. She has the full package to shine in this race.
Missy will probably qualify. She isn’t a sprint specialist. She swims this race only on her giant natural talent. Again, if she wants to win one day this race in the big world meets she will have to stop most of the other races.
Natalie Coughlin is a legend. She doesn’t swim backstroke this year. All for freestyle. I wouldn’t be surprised if she qualified.
… Read more »

Neal may not have done much since London, but she’ll still be an incredible force in college, Definitely underrated. Simone Manuel’s still only 16 and she’s potentially in the mix for Barcelona. She should be the most coveted recruit in the class of 2014. (Pure) sprinters rule the world in NCAA swimming.

Franklin still has a lot to prove in the 100 as she has a PB of 53 mid as a 17-year-old. once she gets stronger and more experienced, a sub 53 swim isn’t out of the question.

52 low the day she will train all year only for sprint and she will stop to swim the other strokes. After 2020 when she will have 6 olympic gold medals and around 10 world gold medals on backstroke in her pocket, perhaps she will dream of something different to keep the motivation.

I go along with Bobo on this one.

Missy is a fabolous talent and exactly what US swimming needs after the demise of Phelps. In my book, though, Missy faces a choise in the near future. She can be a medal machine or she can try herself out in marquee events. It’s very difficult to be both effectively.

What makes you think that Weir will be 2nd other than her looking “just like a sprinter?”

Just my surprising list 🙂 Coughlin is a natural talent and the flag carrier of not-so-tall swimmers in sprint events, just like Morozov on the Men’s side. They should marry each other.

Weir and Romano have had their disappointments and I’m sure they will fight very hard to become part of US team. Both looking just like natural sprinters: tall and strong. Only technical issues can hold them back.

Vollmer has prepared herself in an unorthodox fashion with training only once a day. one-hundred meters is not a long journey though so it may be just enough. Training less can cause disappointments in your bread-and-butter event but positive surprises elsewhere. Hardy can be fourth as well.

I’d love Coughlin to get one of the individual spots, but I don’t think she’ll swim 53mid, the minimum required for an individual spot. The last time Coughlin swam under 54 was 3 years ago (53.67 in 2010 Pan Pacs).

Aswimfan, you think it will take a 53 mid to qualify individually? I wouldn’t be surprised if Missy was the only one under 54. Coughlin just went 54.33 so she’s knocking on the door plus she’s only focusing on sprints.

I think Missy takes the first spot, then Coughlin and Romano will vie for the 2nd spot. If anyone besides Missy breaks 54 it will probably be 53 high.

I agree with KeithM. This event was one of the more disappointing ones last summer at Trials. I only think 3 swimmers will be 53: Franklin, Romano & Coughlin, but I hope I’m wrong.

i think it’s just a wishful thinking, but it would just be such a huge disappointment if the most powerful swimming country (by far) can’t even produce two 53mid swimmers. It takes almost 53mid these days to final in a major championships.

Although I do think Missy and Romano will swim 53mid in Indy.

How many spots is there on the team?

Most posts focus on 6 relay spots.. in some races maybe even the 5th relay spot is not a guarantee anymore with Phelps out and the winners of each 50 going.. I would not be surprised if any 6th relay only swimmer does not qualify at all

I think twenty six competitors are allowed for both Men and Women.

How does Kelsey not have Natalie in her top 8? Even if she just goes what she went at Santa Clara she should be in there. I also don’t expect much of out Dana Vollmer this summer, she just hasn’t looked sharp.

I think that there will be enough multi-event qualifiers (Lochte, Franklin, Ledecky, Dwyer) to select Top 6 for both 100 and 200 free.

Don’t forget they will also select the winners of 50 strokes before they pick the 5th and 6th placers.

She’s the American record holder ! and she’s been around for years!