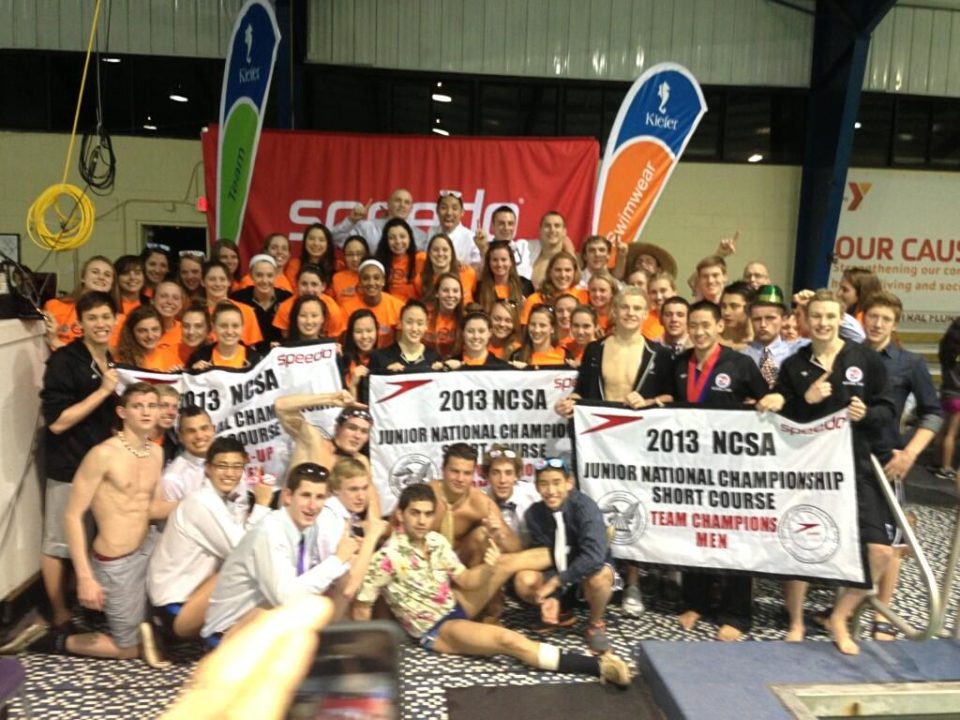 Last year’s Swammy Award winner for the high school/club coach of the year went to Bolles’ Sergio Lopez. This is an award that goes to the coach who has had a particularly noteworthy success with swimmers at the high school/junior level in the United States (combined, because so often they are the same coaches).

This year’s honor goes to John Flanagan of the Nation’s Capital Swim Club in the Washington D.C. Metroplex-area.

Ignoring team size, there’s no doubt that this program has the most top-end talent in the country. That’s in part due to the level of coaching, and in part due to the massive size of the program. The club has 10 different facilities, with 9 different ‘head coaches,’ and in many cases those head coaches aren’t actually the senior coaches. At last word, Cassidy Bayer trained with Jeff King; and Carsten Vissering and Katie Ledecky train with Bruce Gemmell out of the Georgetown prep site.

But if we’re boiling things down to a single coach at a single site, Flanagan’s Tyson’s Corner site, sitting just outside of the western edge of the Beltway, seems to be the richest in talent.

NCAP doesn’t publish a complete listing of who’s at which site, but as far as we can tell, two of NCAP’s big record-setters train there: Janet Hu and Andrew Seliskar. In total, this one site alone sent 5 swimmers to the World Championship Trials: more than the rest of the NCAP sites combined. Aside from Hu and Seliskar, this site also sent Megan Byrnes, Kyle Tyrell, and Emily Meilus to Indy this summer, and also put Chris Grimmett-Norris on the Junior National Team in the open water 10k. Three members of the Junior National Team from the same training group is an impressive feat. Also in that group for the majority of 2013 was Lea Gwennap, who was a part of at least one National Age Group Record-breaking relay.

An Honorable mention goes to Bolles’ Jason Calanog, who is the head coach of their ‘late night’ program. That is a ‘late night’ program that includes the likes of Caeleb Dressel, who already has a Swammy of his own, and the rest of the high school-aged swimmers in the Bolles program that don’t actually attend Bolles. He also helps out Sergio Lopez’s Bolles-centric group, but the ‘late night’ kids are his, all his.

While it would be silly to pretend as though we were separating Calanog’s coaching accomplishment in the last year from Caeleb Dressel’s success, Calanog does not get an honorable mention on the strength of one swimmer alone – after all, coaching kids isn’t about producing just one star. It’s about developing a depth of talent.

He’s also the coach of Florida State-bound Meghan Haila from Creekside High School, who was the Florida 3A State Champion in the 100 breast. Also on Calanog’s roster of athletes specifically is Clay High School sophomore Sherridon Dressel: who in 2013 was the Florida 2A runner-up in the 100 back, and who in 2013 looks like she’s got the potential to be as good as her brother.

Other swimmers specifically in Calanog’s group to look for in the future:

Also receiving an honorable mention is Jason Turcotte of the Dynamo Swim Club. Turcotte, who is the program’s head coach and directs the Senior I group at their Chamblee Facility, was the full-time coach this year of the likes of Junior National Teamer Kylie Stewart and Senior National Teamer Gunnar Bentz, who accounted for 5 medals, three gold, at the 2013 World Junior Championships.

He also was the coach of Jay, Kevin, and Mick Litherland (Jay and Kevin are Junior National Teamers) from August until November, after their Alpharetta site lead Rich Murphy left for the head coaching job at the University of Houston and until Franz Resseguie took over that site in November.

lol Harrison is a good friend of mine, he grew up swimming in South Carolina, the reason he doesn’t have any USA Swimming results is because Harrison is his middle name, Clayton is his first name. He had shoulder problems when he was around 12ish, so when he moved to Jacksonville about that time, he picked up some other sports, but he never played much football. I think that’s in reference to his coach’s comment that he’s built like a football player.

The best confirmation of John’s extraordinary coaching ability is the aura he creates around excellence. Ask any of his swimmers and to a person they will tell you that swimming in his group makes you want to do your best – everyday, every race. In an almost magical way, he has what can only be called the X-factor of Coaching – that rare ability to evoke an attitude and dedication in his swimmers that brings out their best. John’s legacy in swimming extends far beyond the Potomac Valley. Swimmers and coaches throughout the country (and the world) know “Flanagan.” Sure he’s a talker, a joker, and has a story or anecdote for just about every moment, but John’s most memorable… Read more »

Flanagan is the man. Have swam against his team, coached against his team, and been fortunate enough to coach with him on national staffs. He is funny, smart, passionate, and demanding with his athletes, who in turn are great competitors and great athletes. If you ever get a chance to talk to him at meets soak up his knowledge. He is a true ambassador for the sport. Congrats John on all that you do. Job well done.

Congratulations to John for doing an incredible job year after year. His award is well deserved!

I just wanted to add my congratulations to John for receiving this award from SwimSwam. He is very deserving of the recognition. All of our senior coaches have the same goals in mind as we start the season- to help our athletes reach their highest potential. Coach Flanagan exemplifies this goal season after season. Congratulations John!
Thomas E. Ugast
Chief Executive Officer
Nation’s Capital Swimming, Inc.

Agree that John is and has been a great coach for a long time. Let’s go back to Michelle Griglione for starters.

John is a great coach and a major reason that I now coach for NCAP too. I never swam with a team in my life until age 45—and that was with John, who cared enough to push me along with the really good guys.
Congratulations John!!! Time for some well-deserved honors.

Great choice for this award!