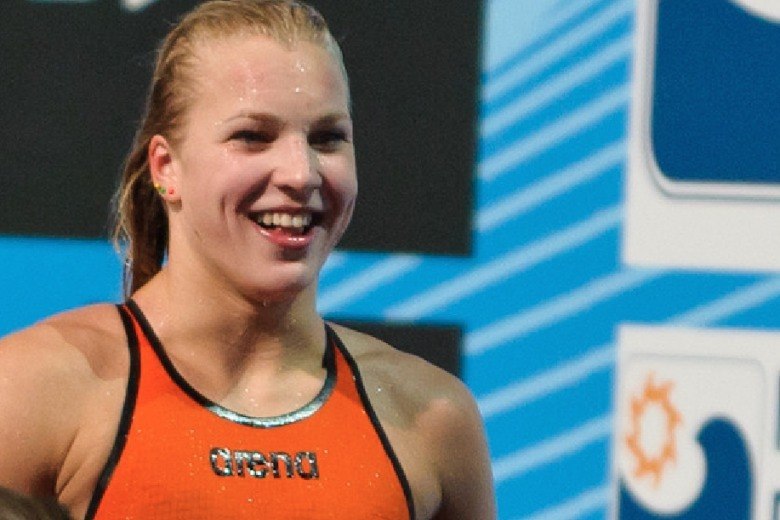 Ruta Meilutyte rips a 1:04.52 in the 100 meter breaststroke prelim, .6 tenths faster than the rest of the field! (Photo Credit: Victor Puig, victorpuig.com) 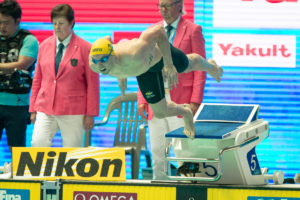 I am sure y’all are still thinking/talking/gossiping/speechless about Day 1 of Worlds yesterday. I still can’t believe some of the swims thrown down yesterday either, and we still have seven more days to enjoy. Then my swimmer brain turns back on.. yes, it is still seven more days that they are expected to step up and swim big.

Heading into day 2, we will see some doubles emerge by our top swimmers and some individual race premieres by others. Katinka Hozzu and Maria Fernanada Gonzalez Ramirez take on their second and third individual event of the meet. Both are in the 100 backstroke this morning and the 200IM finals tonight, making for a tight turn around in the finals session.

Kosuke Hagino will get the chance to back up his great performance in the 400 freestyle last night in more two individual swims today. He will compete against Matt Grevers, 100 backstroke, and Ryan Lochte, who makes his individual debut in the 200 freestyle. Which brings up Yannick Agnel – will he be ready to tango with the big boys today?

All the links you’ll need for the week –

We saw our first sub 1:00 performance out of heat four, none other than the defending Olympic Champion Missy Franklin at 59.13. Only two other women swam sub 1:00 this morning, and Missy made it look easy. We said she had to swim faster to feel more comfortable in this event to repeat this summer, and I think she just sent out the message.

Her USA & Cal Bear teammate Liz Pelton was one of those fellow sub 1:00 women this morning. She qualified 3rd for tonight at 59.94. Both solid swims for the American’s, around .5 for each on their world best times.

Ironwoman Katinka Hosszu was our other sub 1:00 swimmer this morning. Hosszu is 2nd at 59.40. She dropped a pretty solid .8 from her start list time to get under for the first time. Hosszu was known as an IM and butterfly specialists, but her backstroke is now undoubtedly solid. She’ll swim this event before her 200IM final, and it’ll be interesting to see the race strategy she chooses – most likely, go hard and go fast.

Hosszu has decided to scratch this event final.

She was lucky number 8 every time she swam this event at the 2012 London Olympics, but no more. Fu Yuanhui (CHN) is 4th after the heats this morning in Barcelona, at 1:00.01.

Emily Seebohm scratched the 200IM final tonight to focus on this race. If any of you can recall last summer, Seebohm had the fastest time out of the heats and semi-final (58.2), but swam slower in the finals (58.3) to walk away with the silver. Her times thus far this year wouldn’t have us doubting Missy Franklin for the win, but she has the ability to upset Ms. Franklin.

Heading into Barcelona, Simona Baumrtova (CZE) had the 16th ranked time in the world. While her time this morning wasn’t much faster than her best, her solid swim has moved her up to the 6th spot for semi finals.

Our bronze medalists from London, Aya Terakawa from Japan is 7th. Terakawa is know for a strong, fast first 50, and this morning she had the secondest fastest split this morning at the 50 at 29.19. The only swimmer better was our top seed Missy Franklin (29.06).

The men’s 100 backstroke is consistently one of the best races to watch at the international level. Looking at results of this event after the heats, the men seemed a bit flat this morning.

Heading into Barcelona, Ashley Delaney of Australia was “only” the 9th best time in the world. He only dropped .03 off his best time this year to be our top seed tonight for semi-finals.

American David Plummer showed that his finish at World Championship Trials was no fluke. He sits 2nd for semi-finals tonight. Between Plummer and Delaney, the two of them split very similar races – Delaney 26.17/27.43, Plummer 26.14/27.48. Plummer is obviously better than this time he swam this morning, so maybe he is holding something back for semis tonight.

With a .5 drop from his seeded time, Jiayu Xu (CHN) is the 3rd seed. Jianbin He & Feiyi Cheng (seeded 13th) were China’s top backstrokers this year. Xu is a new name to keep an eye out for.

Ryosuke Irie and Kosuke Hagino had strong showing for the men of Japan this morning. Irie is 4th, 53.66, while Hagino is 7th, 53.94. Both added over .5 from their best, but for someone like Hagino who has multiple races, you have to pace yourself and just secure a lane for semi-finals.

Our world leader this year, Jeremy Stravius from France, is 5th. He was out the fastest at the 50m mark at 26.01 (Irie was second fastest at 26.11), but with a 27.84 second 50 is landed him behind the stronger closers in the field this morning.

Our defending gold medalists Matt Grevers is 6th. I have faith that Grevers is better than the 53.92 he swam this morning. His 50 butterfly yesterday was slightly unimpressive, so I am hoping he can find this groove in his best event here in Barcelona.

I was a big Rebecca Soni fan. She’s my former teammate at USC. I’ll admit that I have missed watching her swim this year post London. But if I had to pick a new breaststroke swimmer, I am a fan of Ruta Meilutyte.

Meilutyte had quite the run in London. At just 15 she won the Olympic gold in 1:05.47. She was already faster this year, swimming 1:05.20, but she got up and bettered that this morning swimming 1:04.52 – .6 better than the rest of the field. She gets out fast and comes back fast.

Jessica Hardy’s world record, 1:04.45 is going down here in Barcelona. Remember, that was done in 2009 with a tech suit. Meilutyte is good.

Jessica Hardy is 2nd after the heats this morning. She spoke of focusing on her breaststroke this year post London, and it has paid off. She is over a second faster than her time in Indianpolis, swimming 1:05.18 here in Barcelona. Her time today would have been the fastest in the world, before Meilutyte went sub 1:05.

Russian breaststroker Yuliya Efimova swam a solid preliminary swim, qualifying 3rd in a time of 1:05.24. Like the two women before her, that is also her best time of the year. She was fourth in London in this event, but I bet she finds herself with a medal in Barcelona.

Rikker Moller Pedersen of Denmark is 4th, 1:06.30. Viktoriya Solnceva of Ukraine moved up from 16th in the world with a .8 drop to qualify 5th for semi-finals.

Previously unranked Marina Garcia Urzainqui from the home country of Spain gave the crowd something to be proud of. She dropped a second from her start time to finish at 1:07.18 and qualify 7th. Her time would have ranked 8th heading into Barcelona.

I kind of am at a loss for words in this event. It overall seemed slow, just like the men in the backstroke this morning. The names you’d expect to be at the top are in the middle, which introduces us to some new names here in Barcelona.

Great Britain finds themselves with a top qualifier today. Robert Renwick swam 1:46.88 to sit 1st into semi-finals. His best this year of 1:46.6 is ranked 12th in the world, which should give some perspective on some of the slow times here this morning.

New names include Nicolas Oliverira from Brazil, 1:46.99. He dropped 1.2 from his best to finish 2nd this morning. While his new time barely ranks him in the top 20 in the world for the year, it is a great swim and maybe getting seeded into a middle lane with produce another great swim tonight.

Kosuke Hagino (JPN) is his 2nd individual event of the day finished 4th, 1:47.33. He will have three events to separate his two semi-final swims tonight.

Our 2013 world leader Danila Izotov from Russia is 7th, 1:47.76. That is over a three second add from his best time this year set at WUGs a week or so ago. I hope this is just a case of a bad morning swim, but the Russians haven’t been able to really hold onto that taper they had in Kazan.

Ryan Lochte and Conor Dwyer are tied for 9th swimming 1:47.90 this morning. All I can say is I hope those are just first race jitters.

Lotte Friis from Denmark out of heat 1 is our top qualifier. She shaved over twelve seconds to stop the clock at 15:49.18.

Katie Ledecky‘s swim last night in the 400 freestyle was just awesome. She really is a fearless competitor when she hits the water. Out of heat 3, she is fractionally behind Friis, swimming 15:49.26.

Both Friis and Ledecky split consistent 31-highs from start to finish. If anything Ledecky was more tame than we normally see her race in her swim this morning. A full day and a halves worth of rest and no doubt Kate Ziegler’s world record (15:42.54) is history.

In her third individual event and fourth race of the meet, Mireia Belmonte Garcia (ESP) dropped 11 seconds to finish 16:00.31, 4th overall. Tonight she will race in the final of the 200IM.

American Chloe Sutton earned herself a second swim finishing 7th, 16:04.72 – about three seconds better than Indianapolis. Glad to she her get a finals swim after failing yesterday in the 400 freestyle.

One disappointing swim had to be Jazmin Carlin (GBR). She’s been swimming well leading up to Barcelona, being the only other woman than Ledecky to swim sub 16:00 at the time. She failed to qualify for finals tomorrow, adding almost 20 seconds to finish 9th, 16:06.46.

I know Bobo, still can’t believe how exciting (and energy draining watching it!) yesterday’s races went. Well let’s see what Day 2 has in store for us in a few minutes… 🙂

Also a tip for anyone who may be experiencing some connection speed issues with Eurosport when going thru a free UK VPN service from outside Europe (SD quality, occasional buffering). Seems like once you’ve logged in to your paid account and the stream’s running, you can disconnect from the VPN and the stream will keep rolling…but in crystal sharp 1080p HD!

thanks for the post of the finals for day 1 . I was exhausted too and happy for France victory . Well deserved .