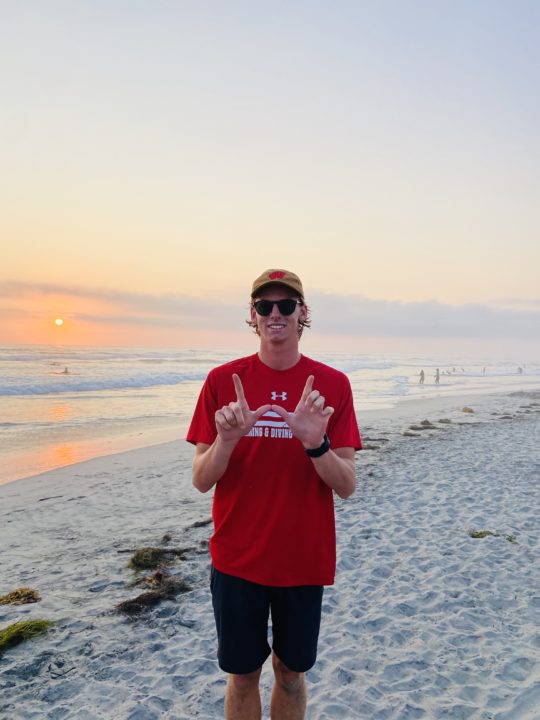 Sprinter Dylan Delaney has transferred from the University of South Carolina to the University of Wisconsin after two seasons with the Gamecocks. Delaney tells SwimSwam he is redshirting the 2020-21 season, while he plans on heading to Madison in January with two seasons of eligibility left.

Delaney is from California, where he trained with Rancho San Dieguito before college. His father, Murphy Reinschreiber, swam at Wisconsin, while his mother, Shannon Delaney, swam at UCSD.

Excited to announce that I’ll be transferring to University of Wisconsin in January.  I’m stoked to be following my Dad’s footsteps to Madison as a 2nd generation swimmer. Thankful for the friends and memories from my time as a South Carolina Gamecock. I’m looking forward to being a part of the amazing program at UW and the opportunity to continue to compete at the highest level.

At South Carolina, Delaney made small improvements in the 50 free and 100 free, while he dropped major time in the 100 fly.

Sprint free was one of South Carolina’s strengths last year, where they put together a fourth-place effort in 200 free relay at the 2020 SEC Championships. Delaney was that school record-breaking relay’s anchor, splitting a 19.26 and beating out Tennessee, Kentucky and Louisiana State, who the Gamecocks had narrowly trained going into the final leg.

Delaney just missed scoring at the 2020 SEC Champs individually, placing 28th overall in the 50 free (19.91). The Gamecocks will feel his loss, though they still return top sprinter Lewis Burras (19.1/42.2 last season) and the bulk of their sprint group.

Delaney will then have an immediate impact, as his 50 free is over two-tenths ahead of Back’s roster-leading best last year. He would’ve made the 50 free B-final at the 2020 Big Ten Championships, and he’ll likely slot in right away as a key relay leg.

This is the third transfer out of South Carolina this off-season, following Kate Luft (UCLA) and Hallie Kinsey (USC).

Ben Wiegand joins the Badgers in 2021 also. 20.1/19.1 relay split watch out for that weakness to become a strength fast.

Wiegand/Delaney/Carlson/Casey on a relay in ‘21?
I think Jacob Carlson has been almost sub-20 on a relay but has been dropping time like crazy over the last year or so – primarily a backstroker but he’s a big body. Isaac Casey is another big freshman this year who’s been 20.4. I could also possibly see Erik Gessner or Andrew Benson on that relay.