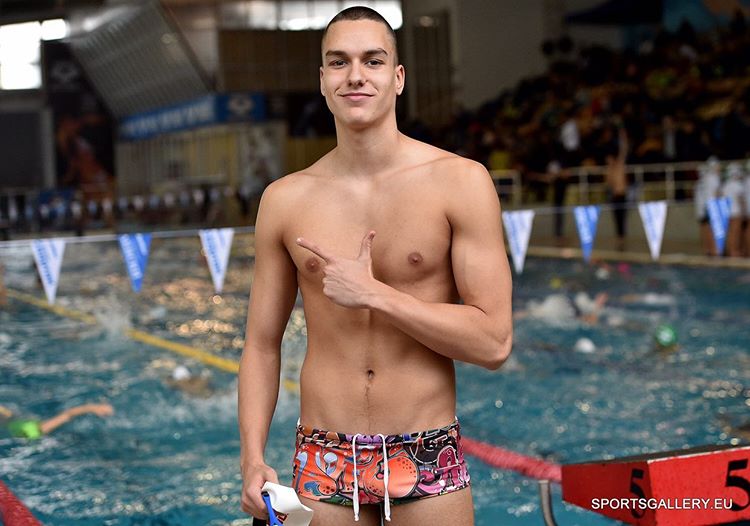 Take note of the name of Kaloyan Levterov, as the 17-year-old Bulgarian is making exponential improvements in the 200m backstroke. Archive photo via Evgeni Tsekov of Sports Gallery

Introducing himself to the elite backstroking world in a big way is 17-year-old Kaloyan Levterov of Bulgaria who just today ripped a 1:56.67 stunner to top the 200m back podium in Burgas.

It was just this past summer that teen Levterov became the first man ever from his nation to dip under the 2:00 mark in the 200m backstroke. While competing at the 2020 Bulgarian Swimming Championships in August, Levterov ripped a personal best of 1:59.48 to establish a new Bulgarian standard in this long course 2back event.

Flash forward to today in Burgas, however, and the teen has entered entirely new territory, firing off a world-class 1:56.67 to blow his own record to bits en route to taking gold. After establishing himself as the 2nd-seeded swimmer of the morning heats with a pedestrian 2:15.43, Leverov got to work, masterfully splitting 57.64/58.93 to hack nearly 3 seconds off of his aforementioned national record and previous lifetime best.

More importantly, his remarkable swim here in Burgas tonight clears the FINA ‘A’ qualifying time of 1:57.50 needed for the 2020 Olympic Games in Tokyo. As such, Levterov has qualified for his first Olympic Games at just 17 years of age.

Levterov is inching toward the World Junior Record of 1:55.14, a time Russia’s Kliment Kolesnikov put on the books at the 2017 World Championships.

For perspective, Levterov’s time would check the Bulgarian in as the 5th fastest American male 17-18-year-old ever in the 200m back event, sitting ahead of the likes of Austin Katz, Jacob Pebley, and Shaine Casas. Levterov’s birth date is February 2003.

Post-race, Levterov told me, “I’m overwhelmed right now. The swim was really good, the whole distance went perfect, even beyond our expectations. I would have never thought I would swim under 1:57 right now.”

Along with qualifying for his first Olympic Games, Levtrov now ranks as the #1 European 18&U swimmer in the men’s 200m back. Worldwide, the teen is positioned in the 3rd spot in the season’s rankings as of today after China’s Xu Jiayu and a soon-to-be-entered Keita Sunama who hit 1:56.11 today in his native Japan.

Awesome accomplishment, but I wish every nation had a trials where they would have to qualify. I feel like the pressure of trials gets people somewhat prepared for the big stage that is the Olympics.

you want trials in Bulgaria? lol

Jesus, kid is gonna be big-time. Amazing for him