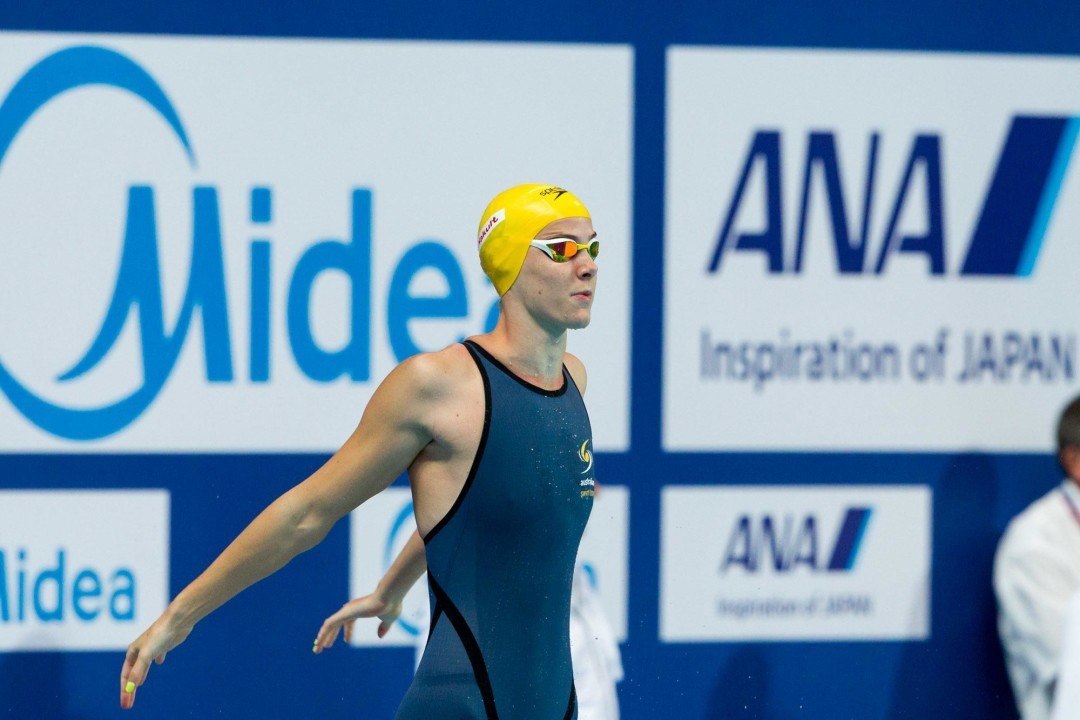 The NSW State Open is the final high-caliber meet taking place in Australia prior to the nation’s Olympic Trials set for April. As such, key athletes are set to swim in Sydney in the name of acquiring Olympic cuts, fine-tuning their racing, or sizing up the enormous in-country talent. Below are 5 keys storylines to watch as the 3-day affair unfolds.

Although not as robust as in the past, we will still see some non-Australian names in the mix, primarily serving as major threats across the women’s events. From Denmark, both Jeanette Ottesen and Rikke Pedersen are slated to compete, which will no doubt add to the excitement in the fly and breast events. For Ottesen, the Dane comes ready to race the 50 fly, 100 fly, and 100 free, while Pedersen will take on some of the Pacific’s best in the 50/100/200 breaststroke and 200 IM events.

Pedersen finished tied for 3rd in the 200 breaststroke at the 2015 FINA World Championships, stopping the clock at 2:22.76, but failed to make it out of semi’s in the 100 event. She since registered the world’s 8th-fastest 200 breaststroke time of 2:24.47 while competing at the World Cup series in Doha last November.

Ottesen had a string of good swims over the course of the Asian World Cup stops including the 25.81 50 fly in Beijing, which currently sits as the 2nd-fastest time in the world. She also managed a 10th-ranked 100 butterfly of 57.97 at the meet. Times for both women entering NSWs are bogus (1:01.50 100 free for Ottesen, for example), so we’ll have to see where they fall in the heats once lanes are assigned.

Of note, Japanese breaststroking powerhouse Kanako Watanabe will also be in the mix for medals in Sydney, scheduled to appear in the 50/100/200 events of that discipline, among other races. The 2015 World Champion in the 200 breast carries that events’ 2nd-fastest time in the world into NSWs with her mark of 2:22.41 from the Japanese Intercollegiate Championships. She also has the 5th-swiftest mark in the 100 distance with her time of 1:06.49.

#2 Man Speed to the Extreme

We’ll get treated to a preview of the most likely line-up in the Australian Trials’ men’s 100m freestyle final, as James Magnussen, Cameron McEvoy, Kyle Chalmers, Kennth To and Tommaso D’Orsogna are all slated to compete.

For Maggie, this will mark just his 3rd competition after having returned from shoulder surgery. He competed at the Victorian Open and the Perth Aquatic Super Series, where the usual fireworks-inducing swims were simmered down to simply acceptable performances. But, with stiff competition yet again and another month under his belt in training and rehabilitation, look for Maggie to throw down improved times, foreshadowing where the 24-year-old may be come April.

For Chalmers, the double World Junior Champion has been rather quiet lately, although he did race in January’s South Australian States. Chalmers posted a pedestrian (for him) 23.46 in the 50 freestyle and 53.90 in the 100 butterfly, followed by a 50.33 100 freestyle victory at the meet. NSWs will mark the first time the young 17-year-old will take on both McEvoy and Maggie in the 100 freestyle in the same heat (if all goes according to plan for the trio), where he’ll need to take his speed up to the ultimate level to make his mark among the men.

Although boyfriend and double World Champion Mitch Larkin will be absent from this meet, the Queen of backstroke, Emily Seebohm, will be in the pool racing her signature 50/100/200 back events. As demonstrated throughout the World Championships, the World Cup series and the Perth Aquatic Super Series, Ms. Seebohm is literally on top of the world in the backstroke and THE woman to beat both domestically and internationally in the events.

However, even the all-star athletes of the world can be off their game periodically, so young 15-year-old Minna Atherton is hoping to take advantage of any Seebohm missteps in Sydney. Atherton is the World Junior Record Holder in the 50 back (27.49) and 100 back (59.37) events and looks to take on not only Seebohm, but also St. Peters and Western’s Madison Wilson.

Wilson finished as runner-up to Seebohm in both the 100 and 200 backstroke races at the Perth Aquatic Super Series, so the 21-year-old knows what it takes to keep pace with the best in the world. Wilson herself holds the world’s 2nd-fastest 100 backstroke and 3rd-fastest 200 backstroke times in marks of 59.09 and 2:07.18, respectively.

Anyone who is a fan of swimming can never tire of the ultra-elite competition that follows Australia’s Campbell sisters in the sprint freestyle events. Both Bronte and older sister Cate will be throwing down in their usual 50 and 100 freestyle races in Sydney, where the women perpetually earn 1-2 finishes, trading places back and forth at each meet.

Trying their hand at shutting down the Campbell sisters will be 21-year-old Brittany Elmslie in both the 50 and 100, as well as Ottesen in those same sprint free events. Southport Olympic’s Melanie Wright will also be fighting for a podium spot in the events, as will 21-year-old St. Peters and Western swimmer Emma McKeon.

Although she represents New Zealand internationally, Lauren Boyle is listed under the Miami Swimming Club moniker for the NSW meet, slated to swim the 400 and 800 freestyle events. She’ll be challenged by young Chandler athlete, Jessica Ashwood, who turned heads with her bronze medal-winning performance in the 400 in Kazan. Her time of 4:03.34 set a new Oceanic Record for the 22-year-old.

Bronte Barratt will also be contesting the 400 freestyle, where she enters the meet with a seed time of 4:06.03, while Leah Neale will also be competing across both the 400 and 800 events to add to the stacked field.

It’ll be interesting to see how fast James Roberts can go in the 100m free too. Since his return to competition late last year, Roberts has continued to improve and looks to fight for a top 6 finish at trials. Over the past weekend he swam at the 2016 Queensland Medal Shots LC 3 meet and produced a time of 49.58 in the 100m.

Australian NSW State Open is also a last hit out for their para swimmers before Trials in April. A couple of infamous swimmers still getting a free ride it seems.

Am I missing the point of Paralympic Swimming?

Not sure what you mean by missing the point of Paralympic swimming? and who is the infamous swimmers you refer too.

Seems alittle bitter if you ask me.

Hopefully James Roberts goes sub 49… Australia needs more depth here and the 4th leg in the relay after Cam, Kyle and Maggie is up for grabs… Hopefully takes a low 48 to make the top 4…go Aussies

Bitterness is not an emotion I feel whilst witnessing cheating in sport.

Let’s see how they swim over the course of the competition.