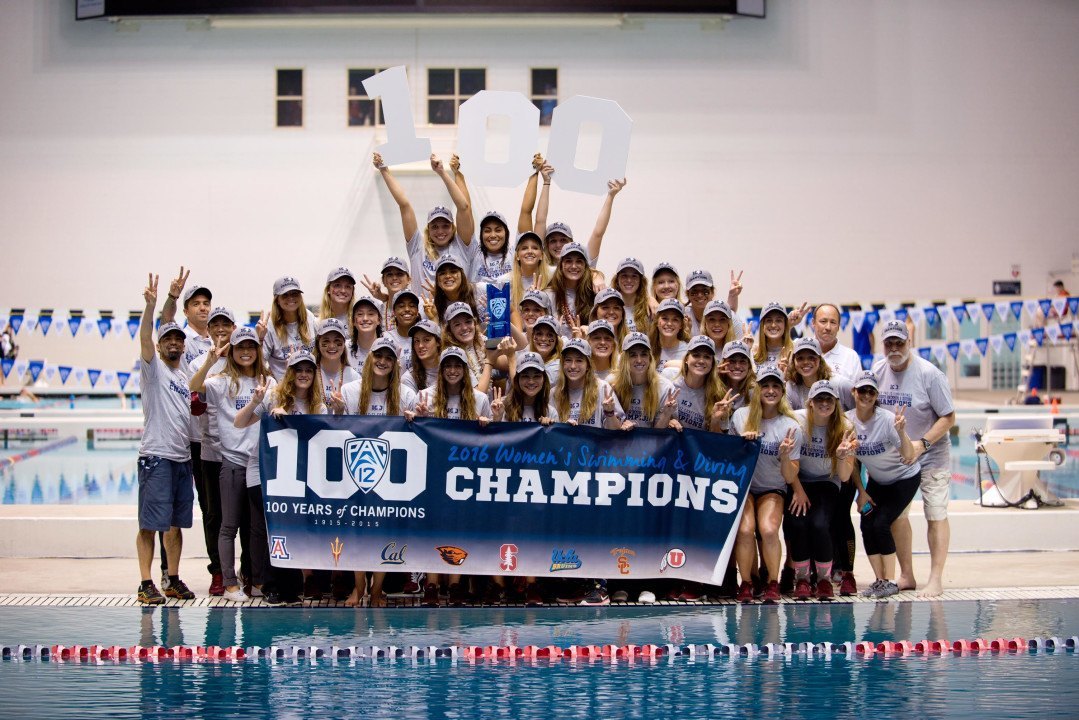 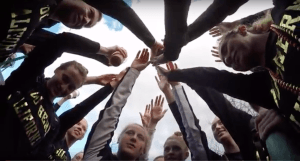 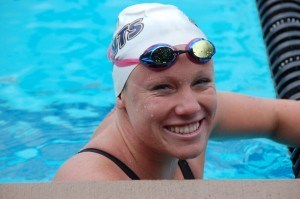 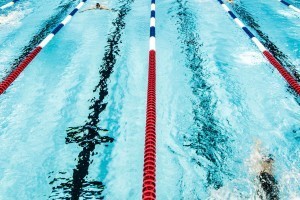 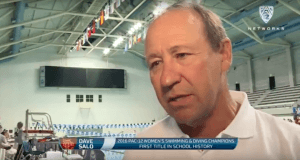 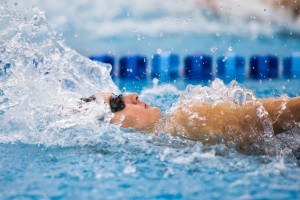 After recent conference domination by the Stanford Cardinal and the Cal Golden Bears, the USC Trojan women were able to win their first conference title, finishing 137 points clear of second place Stanford.

They’ve never won a Pac-12 title in their history, so how did they do it? First of all, USC has had a good season. They only suffered one head-to-head loss in a dual meet, at the hands of Stanford at the end of January. On the 29th they edged Cal by 7 points to take the win, then fell short to Stanford by just 4 points the following day.

With USC being competitive with both Cal and Stanford during the season it seemed logical that they could compete for their first Pac-12 title this season, and obviously they could, but USC seemed lacking in one area compared to previous Pac-12 winning squads. They lacked the star power. Pac-12 winning teams in the past had been led by the likes of Missy Franklin for Cal and Simone Manuel for Stanford. Sure, USC has junior freestyler Chelsea Chenault who is a star herself, but not quite the multiple national-champion level talent of the other two.

How did the Trojans pull it off? It’s not like they won by 3 points either, they won handily by 137. If you looked at the meet from a bird’s eye view, you would definitely come to the conclusion that Stanford won easily. Including diving, they won a staggering 10 out of 16 individual events. Not only that, they claimed 3 of the 5 relays. Cal had 3 individual wins and 1 relay, and USC had 2 individuals and 1 relay. If Stanford won a total of 13 events and USC only won 3, how did USC beat them by 137 points? If we take out the diving points and just focus on individual swimming events, Stanford actually got outscored badly by both Cal and USC. In points from A finals, USC had 693.5, Cal 693, and Stanford 599. Stanford essentially made up that difference on diving, scoring 228 to USC’s 138.5 and Cal’s 126.5. The teams were all fairly even on relay points, so where did USC separate themselves? B finals. In B final points (including 9th-16th in the 1650), USC scored 307, while both Cal and Stanford amassed just 159 each. A big reason why USC was able to outscore Cal and Stanford in A finals was the mid-season return of national team member Kendyl Stewart, who had multiple top finishes including a runner-up finish in the 100 fly. 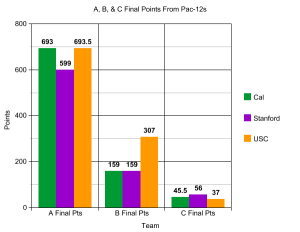 Here is a graph showing the points produced by Cal, Stanford and USC in the A, B and C finals. As you can see, the particular stat that sticks out is USC definitive advantage in the B finals. Take a closer look at the graph here.

Taking points from A finals, relays and diving, all three teams are very close, but Stanford comes out on top. It is the B finals where USC really clinched their first conference championship. They proved you don’t have to dominate the podium to win a big meet. They did it with everyone chipping in, doing their part, and getting the job done whether it was the A, B or even the C final. The depth of this team shined this past weekend.

So where does this put these three teams heading into NCAAs? Despite USC’s historic victory here, Stanford and Cal still remain as more likely hopes of winning the national title. Out of the three, we’d have to consider Stanford as the team with the best chance. With so many victories at Pac-12 due to their top end talent, they will be tough for anyone to handle at NCAAs. USC will lose their advantage over the other two as B final swims from Pac-12s won’t be scoring swims at NCAAs. Defending champion Cal will be a major challenger to repeat, and SEC powerhouses Georgia and Texas A&M will be contenders as well. USC will be good too, but shouldn’t be a major threat for the overall title.

Thanks James, very nice analysis on meet. The win was a notable achievement for USC, but as noted, the way they went about it does not translate well to success at NCAA’s. On the other hand, both Cal and Stanford solidified their resumes as national title contenders with strength at the top. Cal seems to have an edge on individual swim scoring but Stanford may be stronger overall in relays, plus they have at least two divers that have the potential to score in more than one event. Just based on what the teams have accomplished so far this season, it looks to me like Stanford and Cal come into NC’s a step ahead of the next three – T&AM,… Read more »

Congrats to Coaches Dave, Catherine, Wes, Hongping and Chase and the Women of Troy for taking home the first ever Pac12 crown. Hey a win is a win – savor the victory as you prepare for NCAA’s. I am sure the Men will be inspired by your win at this week’s Pac12 Mens Championships! ️️Fight on! ✌️???