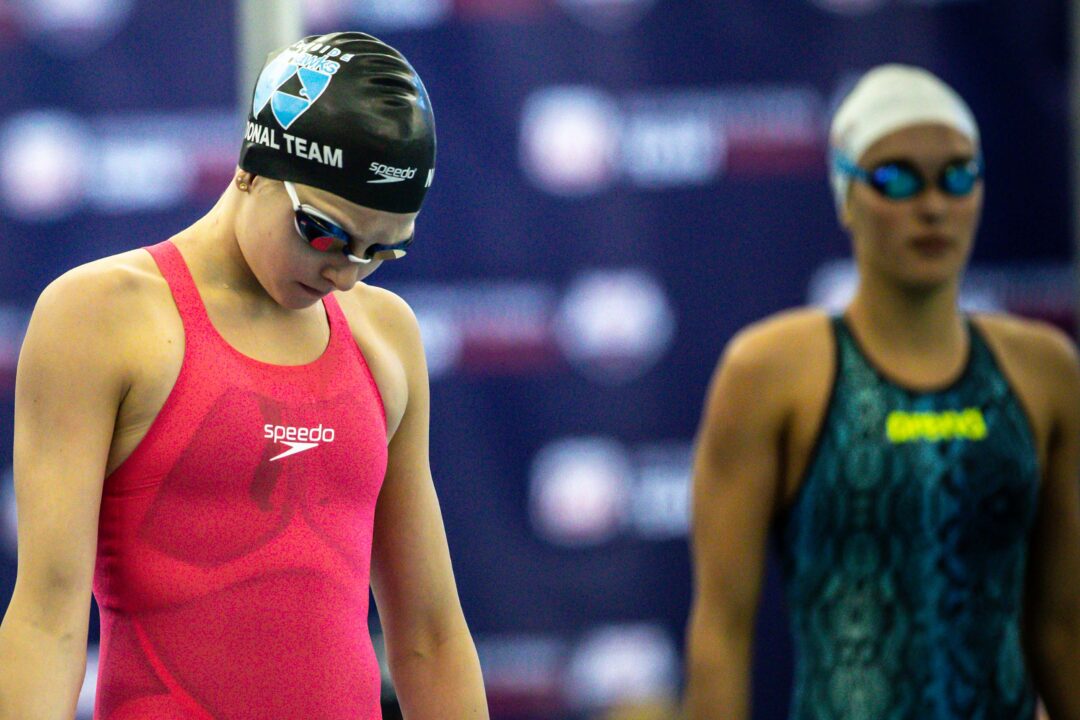 Crush reeled off back-to-back swims of 57.98 in the 100 back and 26.09 in the 50 fly to make a pair of World Cup finals on Day 2 in Indianapolis. Archive photo via Jack Spitser/Spitser Photography

With Indianapolis serving as the host of the third and final stop of the 2022 FINA World Cup circuit, some of the top age group swimmers in the U.S. are getting some valuable international experience racing some of the world’s best, and one athlete taking full advantage of that is Charlotte Crush.

Crush, a 14-year-old out of the Lakeside Swim Team in Louisville, Ky., had a session to remember on Friday morning in Indy, making back-to-back finals within a 20-minute timespan.

First, Crush put up a time of 57.98 in the women’s 100 backstroke, qualifying sixth into the final that will also feature names such as multi-time world champion Kylie Masse, former 50 back world record holder Kira Toussaint and the winner of the event at the first two legs of the series, American Beata Nelson.

Also impressive in the 100 back prelims was another American teenager, 17-year-old Bella Sims, who put up a time of 56.76 to lead the field.

Less than 20 minutes later, Crush was back in the water in the 50 fly, touching in 26.09 to advance seventh overall into the final where she’ll be the youngest swimmer by more than eight years. The next-youngest swimmer in the field will be Sweden’s Sara Junevik, who is 22.

As is the case for the majority of the American age groupers racing in Indianapolis, this was Crush’s first time racing in short course meters, so the times don’t hold a ton of context in terms of personal bests or age group rankings, but you simply need to look at the swimmers she’s competing alongside to grasp how impressive these times are.

In short course yards, she’s already made an impact on the all-time rankings in the girls’ 13-14 age group, currently ranking seventh all-time in the 100 back (51.96) and second all-time in the 100 fly (51.46)—both swims done before her 14th birthday this past March. Given the form she’s shown in Indy, there’s no reason to think those SCY rankings won’t improve in the coming months (she turns 15 on March 10, 2023).

After her busy night of racing on Friday, she’ll tackle the 100 fly and 100 free on Saturday.

Not the first young star from Lakeside, right? 🦋🥇

Was expecting at least one pun in the post

Her sister swims for NC State and her parents (and Aunt) swam for Auburn. So she’s not the first Crush to crush it.

And Charlie at Louisville and Johnny just committed to West Point!

Such an awesome person too! She deserves everything she has gotten!!!