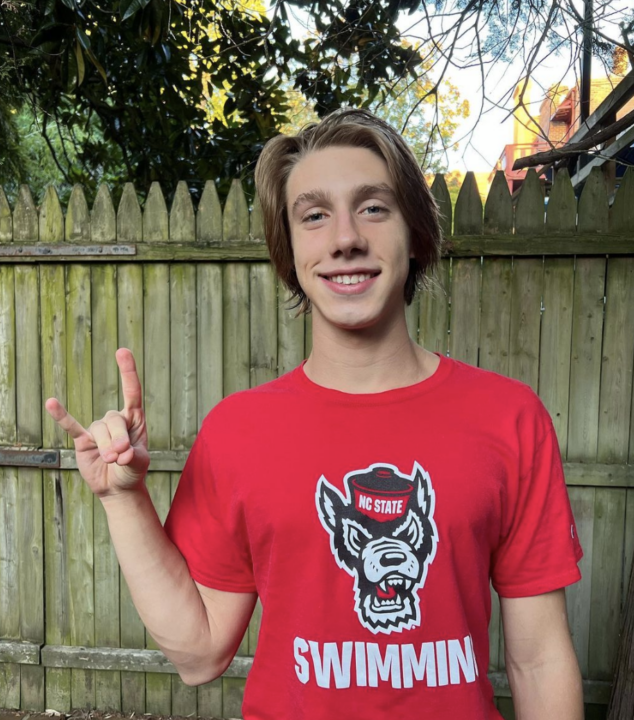 Sprinter Nolan Dunkel has announced his verbal commitment to NC State for the 2024-2025 season. Dunkel trains year-round with Arlington Aquatic Club, and currently a junior at Yorktown High School, located in Arlington, Virginia.

Dunkel was ranked #11 on SwimSwam’s “Way Too Early Recruit Ranks: Boys High School Class of 2024”. He shared his commitment on Instagram:

Dunkel is an extremely versatile sprinter who has shown speed in nearly all the 100s and 50s. His best event right now is arguably the 100 back–he improved nearly 2 full seconds over the course of last short course season, putting up a blistering 47.39. He owns US Open qualifying times in both the 100m backstroke and the 100m butterfly. Given that he has two more years to improve, he could easily become a huge relay asset for the Wolfpack when he arrives in Raleigh.

This past spring, Dunkel represented Yorktown High School at the VHSL Class 6A State Championship. He claimed a state title in the 100 back, clocking in at 48.81. He also earned 3rd in the 100 fly (48.84), and contributed to two third place relays. At the NCSA Spring Championships, he set six new best times. His highest finish was in the 50 back, where he placed 4th with a best time of 21.87.

Yorktown High School has a history of turning out high-level swimmers, with one of them being recent World Champion Torri Huske. Two-time Olympic Champion Tom Dolan is also an alumni of Yorktown High.

The NC State men took home the 2022 ACC title, out-scoring second place Louisville by over 300 points. At the 2022 NCAA Championships, NC State took 4th place, just behind Florida. NC State’s Kacper Stokowsi was the NCAA champion in the 100 back, winning with a 44.04. Although Stowkowsi will be long graduated by the time Dunkel arrives on campus, NCAA finalists and sprint specialists David Curtiss and Aiden Hayes should overlap with Dunkel for a year.

Dunkel is the first public commitment for the Wolfpack’s class of 2028. NC State continues to build upon their recruiting momentum, as Dunkel’s commitment makes this their 6th straight season snagging top-11 ranked boy recruit.

NC State remains strong in sprinting, as they have built a very sprinter-heavy class of 2027 with the commitments of Mitchell Ledford, Hudson Williams, Chase Mueller, and Jerry Fox. NC State also pulled together the #2 2022 boys recruiting class, with the additions of #2 Quintin McCarty and #3 Michael Cotter. This class also features Dunkel’s club teammate JT Ewing, who is also a sprinter.

My boy also goated on relays