10 Things We Noticed on Day 5 of the 2014 Junior Nationals, The Grand Finale Edition 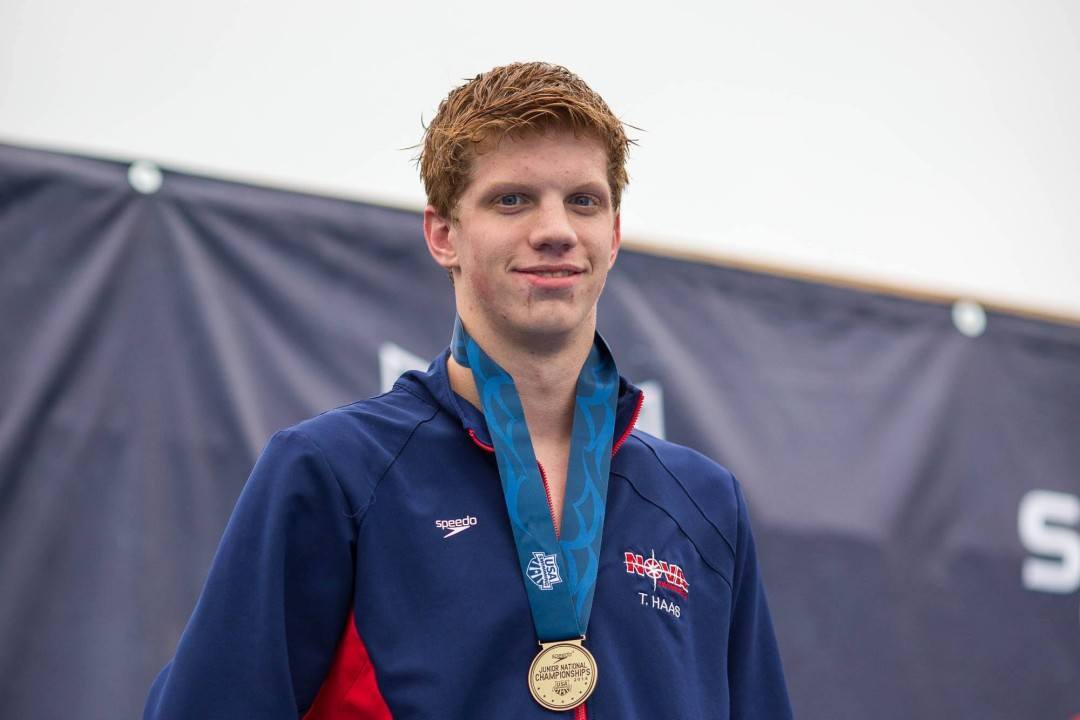 The final day of the 2014 U.S. Junior National Championships had a dichotomy, as we’ve been alluding to all day.... Current photo via Tim Binning/TheSwimPictures.com

The final day of the 2014 U.S. Junior National Championships had a dichotomy, as we’ve been alluding to all day. For some swimmers, it was a punctuation on a long, strong week of swimming, and for others it was a quick tuneup before the big-boy Nationals that begin Wednesday in the same pool.

For men, though, it’s much rarer. Even versatile talents like Gunnar Bentz have never done it. (3) It’s been half-a-decade, in fact, since a male swimmer won as many as four individual titles – Kyle Whitaker (then from the Duneland Swim Club, now from the University of Michigan) took four-and-a-half titles in 2009 – he won the 200 free, 200 fly, 200 IM, 400 IM, and tied for the win in the 100 fly.

That tests the debate over which is more impressive – lateral or horizontal versatility? Are Whitaker’s wins in three different disciplines more or less impressive than Townley’s range? Whitaker ran away with most of those wins back in 2009 (by four seconds in the 200 fly), even moreso than how Haas did this week.

If you said Alex Clarke, then you knew the answer to (5) who is the breaststroke leg on the Carmel girls’ medley relay. Carmel had the Junior National Champion in the 100 back (Amy Bilquist), the 100 fly (Veronica Burchill), the 100 free (Bilquist again), and the runner-up in the 100 back as well (Claire Adams).  Clarke was the fourth piece to that relay, and she split a 1:15.78 to get the Carmel girls on the podium.

SwimMAC, who didn’t have much of their elite juniors at the meet until Sunday, swooped in and took the win. (6) Maija Roses’ 1:09.80 split on the breaststroke leg was the best in the field – and only Carolyn McCann from KING was close in 1:09.90.

Speaking of the boys’ 50 free, many in our audience noticed the (8) diversity today. Of course, our more sophisticated readers will fall over themselves making a comment about “swimming is so diverse, this shouldn’t even be news, why are you talking about it?” The rest of us, however, know that ours is a sport not really at that point yet. It appears as though all of the diversity initiatives, both directly through USA Swimming and those independent of it, are paying off.

Not that it diminishes what Michael Andrew accomplished in winning his first career Junior National title in the 100 back on Saturday, but his runner-up (9) Michael Taylor of the Dynamo Swim Club will have the fastest time of the meetin the boys’ 100 back. He lead off Dynamo’s 5th-place 400 medley relay in 55.51 – better than Andrew’s winning 55.73.

(10 the big finale, firework finish) – all of the other really fast medley relay splits:

Just to heat things up for dressel, his competitor is going 49 flat lcm at training 3 week before major champ

Rafael — to whom do you refer?

Santana made 51.2-49.4-49.0 with 15minutes of interval, yes eletronic timing.
These times dont look that impressive.The fact is BEFORE his taper and rest it is.

Good to remind us Kyle Whitaker in 2009. He had dominated the week on the boys’ side while Missy had dominated on the girls’ side. One has disappeared (in long course) and the other has won olympic and world gold medals. Was he just a suit swimmer? I also have Evan Pinion in mind. He’s today at Tennessee. Good for him. But he was so dominant on distance freestyle in the junior ranks that we could expect so much more from him. He still has time to come back in the spotlight but since 2011 he’s disappointing. On the women’s side I have Jasmine Tosky or Lauren Driscoll in mind. They won many races at Juniors a few years ago… Read more »