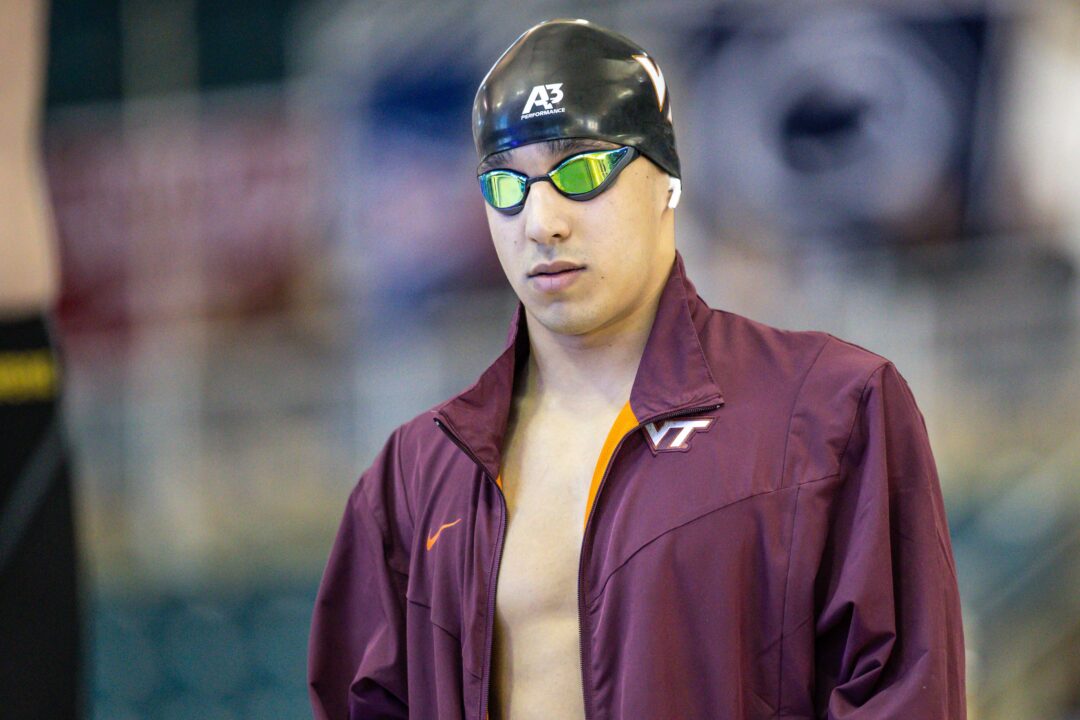 Youssef Ramadan blasted 44.76 in the 100 fly to take over the NCAA's top time, adding to the growing list of NCAA-leading times being swum this weekend. Archive photo via Jack Spitser/Spitser Photography

After a lightning fast dual meet day yesterday where five NCAA-leading times were posted, Youssef Ramadan joined in on the fun at Virginia Tech’s dual versus Penn State. The junior blasted 44.76 in the 100 fly, taking over as the fastest swimmer in the NCAA this season. Tennessee’s Jordan Crooks previously held that honor with his 44.79 from the Tennessee Invite. The time was also a new pool record.

At 2022 NCAAs, Ramadan finished third in this event behind Andrei Minakov and Luca Urlando in a lifetime best of 43.90. Before today, his fastest time this season was 45.13 from the Ohio State Invite. It’s a strong sign for Ramadan, who becomes just the fourth man to crack 45 seconds this season.

In the 50 freestyle, Ramadan took the win again, ripping a season-best 19.09 for a new pool record. His previous season best was 19.19.

Ramadan wasn’t the only Hokie to set pool records: Luis Domínguez took down McCoy’s pool records in both the 200 and 500 freestyle. In the 200, Domínguez rocketed to a 1:33.87, just about three-tenths off his lifetime best 1:33.58. This time last year, the Spainard clocked 1:39.41 at a dual meet versus UVA.

Highlight the men’s meet for Penn State was freshman Eduardo Cisternas, who broke the program record in the 1000 free. He clocked 8:56.63, obliterating the previous record which stood at 9:04.51, set by Nick Ankosko in 2012. This was also his first time under the nine-minute mark, as his previous best was 9:11.28.

Cisternas followed up his record breaking swim with a 4:18.50, which makes him the third-fastest swimmer in program history and is less than a second from the school record.

It was a much closer meet on the women’s side than the men’s, as the Hokies won by just 15 points. Boosting the Hokie women was the fact that they won both relays — the 400 medley and 200 freestyle — and also won four out of the five freestyle events.

Virginia native Sarah Shackelford took on the sprints, winning the 100 freestyle in 49.47. She almost won the 50 freestyle as well, but finished .01 seconds behind Penn State junior Mary Brinker, 22.88 to 22.89. However, it was still a strong swim for her as it was just .04 seconds off the 22.85 season-best she posted at their dual last weekend versus UVA. In the 100, her season best stands at a 49.07.

Rounding out the freestyle event wins was Travis, who won the 1000 free in 9:49.86. It was a season best for her, overtaking the 9:53.13 she swam at the Ohio State Invitational. She was the only woman to break 10 minutes, as her teammate Sophia Ryan finished second in 10:09.19.

For Penn State, it was their breaststroke group that shone: they swept the 100 breaststroke with graduate student Olivia Jack taking first in 1:01.59, with juniors Abby Henderson (1:03.55) and Kylie Rydland (1:03.83) taking second and third.

Why Carles Coll does not swim today?

If minakov is out of form come NCs, I’ll take Ramadan but a half second over the field

Names that come to mind that could make it interesting would be Korstanje, Hayes, Burns, and maybe Rose.