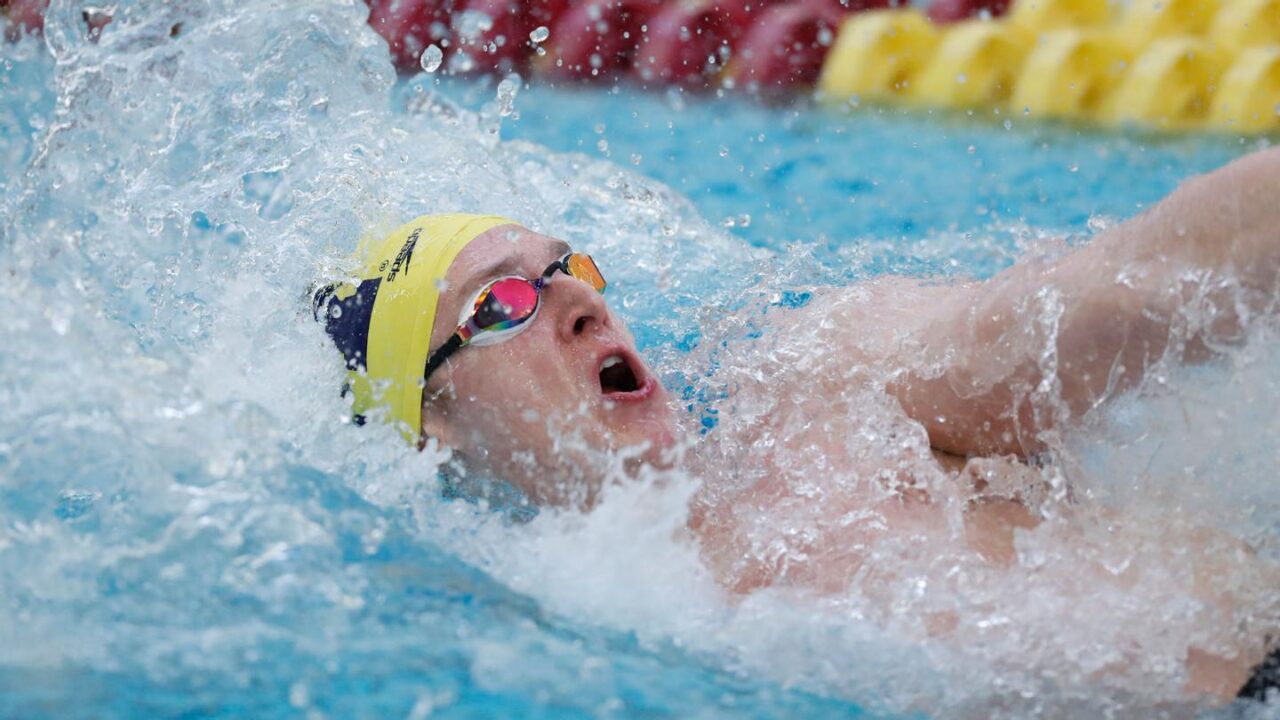 In the men's 100 back, Davis dipped under 47 seconds for the first time this season, speeding to victory in 46.91. Current photo via Michigan Photography/Michigan Athletics

A day after the Wolverine men faced off against Purdue, and the women against Eastern Michigan and Ohio, Michigan hosted Northwestern for a combined Big Ten dual meet. The Wolverines handled business, rolling over Northwestern’s men’s team and managing a closer victory over the Northwestern women.

On Friday’s meet against Purdue, Michigan’s Wyatt Davis swam to season bests in the 50 back, 100 back, and 100 fly. Against Northwestern the following day, Davis lowered his 50 and 100 back season marks again. In the men’s 100 back, Davis dipped under 47 seconds for the first time this season, speeding to victory in 46.91. Notably, Michigan teammate Nikola Acin came in second, swimming a 48.13. It was an excellent swim for Acin, whose personal best stands at 47.29 from the 2022 NCAA Championships.

Davis led off the Michigan men’s 200 medley relay in 21.66, marking a season best in the 50 back as well. His swim set the tone for Michigan, giving them the lead. Brendan Fitzpatrick split 24.80 on breaststroke, then Gal Groumi was 20.91 on fly, and Bence Szabados anchored in 19.29. The Wolverines finished in 1:26.66, 1.47 seconds ahead of Northwestern.

Casey Chung was equally great for Michigan’s women’s team, sweeping the backstroke events. Chung kicked things off in the women’s 100 back with a 54.62, leading teammate Noelle Kaufmann (54.85) into the finish. In the women’s 200 back, Chung swam the fastest split in the field on all four 50s, posting a 1:58.11. ‘

Chung also helped the Michigan women’s 200 medley relay to victory, swimming a 25.37 on the lead-off. Letitia Sim went next with a 27.47 breast split, followed by Lindsay Flynn in 24.07 on the fly leg, and a 22.48 from Claire Newman on the anchor. The Wolverines combined for a 1:39.39, beating Northwestern by nearly a second.

Northwestern had their share of two-event winners as well. Jasmine Nocentini was exceptional for Northwestern’s women’s team, winning a pair of events. She took the women’s 100 free in 49.28, beating out Michigan’s Lindsay Flynn (49.34). Nocentini was out fast, splitting 23.61 on the first 50, 0.50 seconds faster than Flynn. She was able to hold off Flynn’s charge on the final 50, picking up the win.

Nocentini also swam the women’s 100 breast at this meet, marking what was her first time officially swimming the event, according to the USA Swimming database. She had a very good race as well, swimming a 1:00.06, featuring a great first 50 split of 27.94.

Northwestern’s Federico Burdisso won the men’s 200 fly in 1:44.47, finishing 3.02 seconds ahead of runner-up Ben Miller, his teammate at Northwestern. Rather than swimming the 100 fly as well, Burdisso raced the 100 free, winning the event in 43.71. He narrowly beat Michigan’s Bence Szabados (43.76). Szabados was faster than Burdisso on the first 50, but Burdisso was able to come back on the second lap, edging him out at the finish.

Nice to see Wyatt having some great swims… I’m glad he was able to take the time he needed last season.