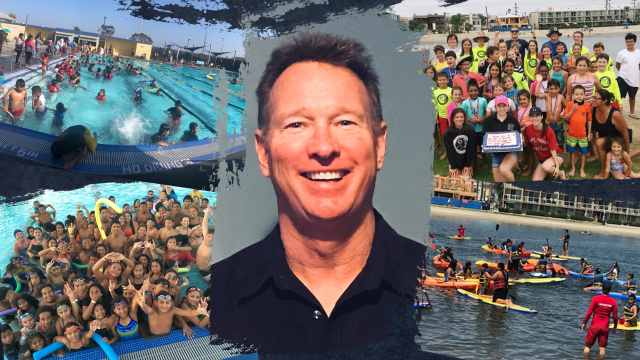 LA JOLLA, Calif. – It is an everyday occurrence in San Diego: a body of water, a handful of lifeguards, and dozens of kids enjoying it. However, for Logan Elementary’s third and fifth graders, such an awe-inspiring experience could only be summed up in a stack of letters thanking the Prevent Drowning Foundation for the swim lessons that “helped them not die.” This reaction is all that University of California San Diego alumnus Buc Buchanan needs to know that his foundation is serving its purpose.

Buchanan grew up in Novato, Calif. and attended UC San Diego from 1978-83. He intended to pursue law and majored in Political Science and Government with a minor in Communications.

“I grew up wanting to go to college and I knew I wanted to go to a UC,” said Buchanan. “I went south and once I got down here, I never left. I think I got very lucky at a young age.”

Buchanan was an All-American water polo player in high school and tried out for the UC San Diego water polo team upon his arrival, securing a spot under then-head coach, Russ Hafferkamp (1977-79). Buchanan was initially told that he would not make the travel roster.

In 1979, Buchanan took two quarters off of school to work a full-time job to pay for school. When he returned to the team, head coach Denny Harper (1980-present) had taken over the program. According to Buchanan, it was Harper who motivated him and led to water polo becoming his central focus for the remainder of his college career.

“Buc was big and strong and fast, and I saw a lot of potential in him as a player and as a leader, even though I don’t think he saw that initially,” said Harper.

Buchanan was co-captain of the UC San Diego water polo team in 1982 and was named a First Team All-American in 1982. After his graduation, Buchanan began practicing and traveling with the post-collegiate water polo team, Sunset San Diego, which he continues to play for today.

“I think my exposures at UC San Diego scholastically, and the teamwork idea with water polo and teams in general, is how I frame every issue I face. I look at, what roles do people take? What are we trying to accomplish?” said Buchanan.

Harper introduced Buchanan to several of his connections within lifeguarding, leading to Buchanan’s start as a pool lifeguard in 1982. Buchanan began his career as a City of San Diego County beach lifeguard one year later.

“I was emotionally and physically drawn to not only helping people, but lifeguarding had a ton of variety,” said Buchanan. “I got involved in some union action and the arrows just started pointing down that path.”

After becoming Lifeguard Lieutenant, Buchanan began working on his master’s degree in Organizational Leadership through National University. He was required to create a presentation for his pre-thesis work, leading to his creation of a strategic plan for the San Diego Junior Lifeguard Foundation.

“I was still majorly connected to the rescue world, but I was also trying to help leave it better than I found it. It seemed to make sense and it seemed like this is what I’m supposed to be doing.” said Buchanan.

Buchanan retired from lifeguarding in 2014 but continued to build the foundation. Its name was changed to Prevent Drowning Foundation in 2015.

“There’s a lot of water focus in San Diego. If you’re living in San Diego, you’ve got to have someone who can help you to experience that type of enjoyment,” said Buchanan. “I’ve seen enough rescues that I wanted to find a way to give hope to kids so they could experience a lot of what I had experienced.”

The Prevent Drowning Foundation is also raising money to build an aquatic safety center which will serve as the headquarters for the Junior Lifeguard program. The foundation is working with the city of San Diego and the goal is to secure a location in Mission Bay.

“The idea is to privately raise money to help build a beautiful building where the Junior Lifeguards and all aquatic organizations can meet and celebrate the water,” said Buchanan.

“It’s not surprising that over the last 35 years some of the best lifeguards have been UC San Diego water polo players, and we’re going to make sure that our athletes are getting involved in carrying out Buc’s vision,” said Harper. “It’s just all part of the family.”