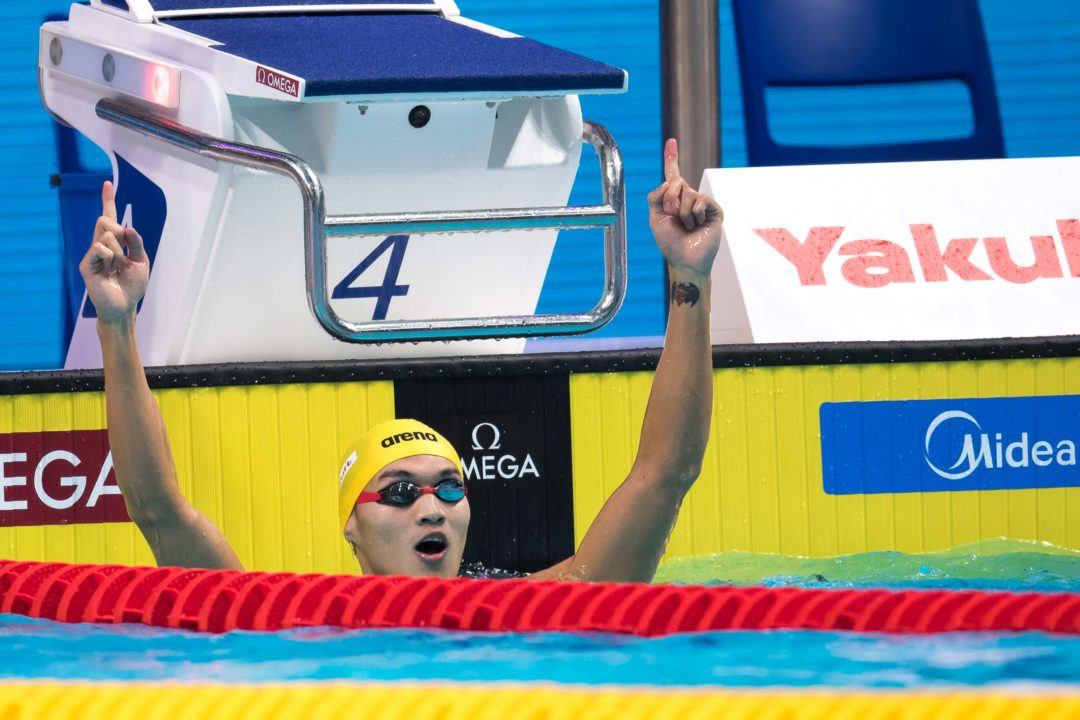 Xu Jiayu fired off a new World Record in the men's 100m back while competing on the final day of the World Cup in Tokyo. Archive photo via Mike Lewis/Ola Vista Photography

While competing on day 3 of the FINA World Cup Series stop in Tokyo, Chinese swimmer Xu Jiayu cranked out a new World Record in the men’s 100m backstroke.

After producing a solid 50.46 behind Aussie Mitch Larkin to claim the 2nd seed this morning, Xu busted out a winning effort of 48.88 tonight to take gold and produce a new World Record. His time overtook the previous mark of 48.90 set by Russian Kliment Kolesnikov almost a year ago.

For Xu, his splits tonight included 23.76/25.12 en route to becoming the fastest short course meters swimmer ever in this event. Xu holds his nation’s standards across the 50m/100m/200m short course meters backstroke, as well as those same 3 events in the long course format.

All eyes will be on this 23-year-old come the Short Course World Championships in his home nation this December.

We were treated to something special by Xu Jiayu of China in the Men’s 100m Backstroke
📷 https://t.co/bEozhdW5qV #FINA #Swimming #SWC18 #Tokyo pic.twitter.com/Vgy3IMbXM7

Murphy & Grevers & Kolesnikov will have serious competition next month

The 2020 backstroke races are going to be great. If Murphy, Kolesnikov, Rylov and Xu are all in top shape, the WRs will be under serious threat, and I can seriously even see one of them getting the 200 back record by then. Plus, we might have a new breakout star from the U.S or elsewhere, no one predicted Plummer to be as good as he was in 2016 or Larkins world topping form in 2015. I’m excited for the Tokyo backstrokes