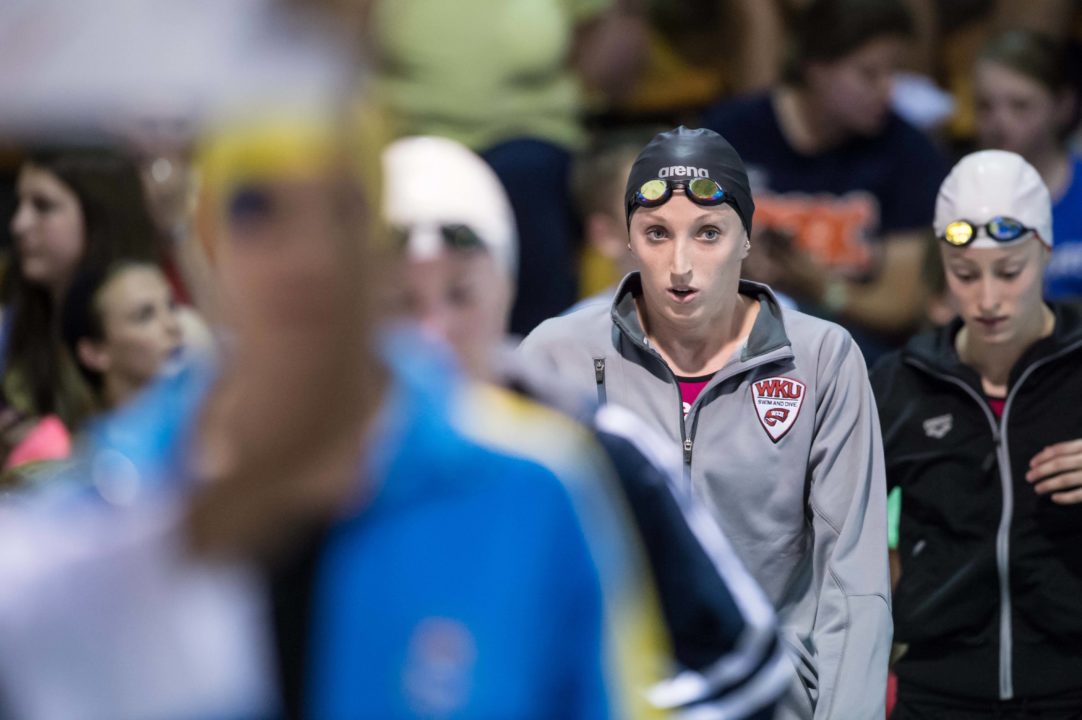 With four of last year's six national teamers retired or taking time away from the pool, the door is open for fresh talent behind 2012 Olympian Claire Donahue. Archive photo via Mike Lewis/Ola Vista Photography

The 100 fly has been a event of major turnover for the U.S. as of late. 4 of last year’s 6 national teamers aren’t competing at all this season. Defending national and world champ Dana Vollmer is absent – though she hasn’t officially announced any retirement, she hasn’t competed since winning the World Championship last summer. Christine Magnuson is retired. Olivia Scott is still taking a leave of absence in Auburn. Erika Erndl has only raced once in non-Masters competition since last summer, and that was all the way back in January.

The steadying presence in U.S. butterfly has been 2012 Olympian Claire Donahue. She’ll be one of just a few swimmers in this field with a strong international resume, and that makes her a front-runner in name recognition if nothing else. Donahue had her best season in the run up to the London Olympics, but still went fast enough to make the A final at Worlds last summer, and has had some solid showings on the Grand Prix circuit this season.

It might be the perfect time for Stanford’s Felicia Lee to take the next big step, as well. Lee was the U.S. Open champ last summer after just missing the Worlds team by one spot a few months earlier. Lee has never gotten back to her crazy lifetime-best of 58.41 from all the way back in 2010, but the stars seem to be aligning for her this season. Lee is finally fully healthy, she’s coming off of an NCAA championship in the short course 100 fly and is beginning her professional career this summer as the established crowd starts to retire out of this race. Keep an eye out for Lee this summer.

Speaking of swimmers getting hot at the right time, how about rising USC junior Kendyl Stewart? After a somewhat disappointing college season, Stewart shattered her own lifetime-best just a few weeks ago at the Fran Crippen Swim Meet of Champions, hosted under the same Southern California sun that will overlook nationals next month. Stewart went 58.52 there, and regardless of how her taper turns out, merely repeating that time should be enough to garner a championship final slot.

After that, things start to really tighten up, with plenty of rising swimmers looking to steal their moment in the spotlight. Mission Viejo 16-year-old Katie McLaughlin might be the next big thing in the 200 fly – does she have the short speed to contend for a national team spot here? McLaughlin, an incoming high school senior, has already been sub-minute this year, hitting a lifetime-best at the Mesa Grand Prix.

The NCAA offers an excellent slate of top-notch swimmers. Kelsi Worrell was the national runner-up there, and comes out of a Louisville program that seems to get hotter and hotter. Dani Barbiea was one of the big early-season shockers of the college season and finaled at the 2013 U.S. Open. Lauren Harrington won the B final at last summer’s U.S. Open with a breakout swim of 59.52, and is coming off of back-to-back national title runs with her Georgia Bulldogs. Then there’s UNLV’s Katelyne Herrington, Kentucky’s Tina Bechtel and USC’s Jasmine Tosky to watch out for.

One of the more interesting stories is that of Amanda Kendall. A former college star who saw her career flame out with two different schools, Kendall is making a comeback with T2Aquatics in Florida. She was a 2012 Olympic Trials finalist, and has already been flirting with the minute barrier on several occasions this season, though she hasn’t competed since the Mesa Grand Prix in April. If she’s entered and ready to go, Kendall just might find that a new training home is all she needs to unlock her vast potential.

Outside of McLaughlin, there are a few good young athletes to mention as well. Stanford-bound Janet Hu is a top-notch swimmer out of Nation’s Capital. SwimMAC enters the versatile Kathleen Baker, who is better in the backstrokes but still tough here. Courtney Weaver is a Georgia commit who’s already been 1:00 this season and Minnesota-bound Danielle Nack cracked a minute last summer at Junior Nationals.

It’s also worth noting that Katie Hoff has dabbled in the 100 fly this season in her under-the-radar comeback story. There’s still a lot up in the air with Hoff this summer, but she’s an interesting name to watch in a race that feels like it could be anybody’s game for the international travel spots up for grabs.

totally hoping for new, young, blood in this event. we need a fresh face on the international scene with a really fast time…holding out for Lee/McLaughlin/Stewart shedding.

Like the womens 200 IM…this is one event the US National Team needs to reinvent themselves.

It’s a total nightmare to predict that event!

Without Dana Vollmer the race is very open.
There aren’t clear favorites.
The youngsters are still a little young.
And the old generation isn’t magic.
That event is weak right now in USA.
I think it will be much stronger in 2 years.
But we are talking about this year.
So, the question is: will an American girl swim under 58 this summer?
I’m not sure.
Claire Donahue is the slight favorite on paper but very slight.
Felicia Lee was great in her last college season but in long course she hasn’t… Read more »

I know she’ll still be really young, but I like Bayer for this event in 2016.

I’m quite surprised at the lack of speculation/info as far as whats going on with Vollmer. As I recall, she previously stated Rio as her goal. Can anyone shed any light on what she’s been up to?

Donahue hasn’t looked to be in 57sec form in awhile. If someone doesn’t have a breakthrough swim the Aussies will be strong favorites in the medley relay.

Strong. Perhaps not but favorites yes if there isn’t an American girl under 58 in the 100 fly.
And the Aussies are at home.
If Missy is Missy, she will be ahead of Emily Seebohm. But it’s not sure she will swim under 59 this summer.
Jessica Hardy or Breeja Larson are much faster than the Australian breaststroker. At least 1 s. Probably around 1.5 s.
Butterfly is the key for the Americans. They must have a girl around 57.50 to keep 1 second of advantage over the Australians before the freestyle leg.
Because there’s Cate Cambell on freestyle for Australia. Simone Manuel is able to swim a 52.50 relay split in my opinion but… Read more »

Dana Vollmer did not win the World Championship in this event, she was 3rd.

You are correct, the sentence was meant to read “since winning the national title and competing at the World Championships.” It’s been adjusted above.

Nothing against Claire, Felicia etc– who knows what they might be capable of down the line– but I worry a lot about this event for the US, especially in regards to the medley relay. I can’t bear the thought of losing that relay!! No one comes close to Dana’s times, or Sarah S’s (Sweden) for that matter.

Do you folks realize that our butterfly American Record holder in yards and US open record holder in SCM is still in the pool? None other than Natalie Coughlin. Her yard record converts to 56.91 (or 56.38 with Swimming World’s time converter). I sent her a good natured tweet asking her to dust off her butterfly. I know she’s been focusing on the… Read more »

True Michael, but remember that 2013 long course 100 free split 52.93? Not many underwaters to help her there. And Bobo- if she’s so good at 100M free, how is 100M fly “too long” for her? Not to mention the fact that there are world class competitors in many other sports who are her age or older, in distances all the way up to a marathon or The Tour de France. I think people burn out on the TRAINING volume traditionally done for the longer events, like Phelps in the 400IM. But 100 fly is a sprint!!!!! Someday someone her age will break a 100m world record, and everyone will realize it can be done. And I do think the… Read more »

Thanks KP. I didn’t know I had a sexy French accent but why not? 🙂
About Natalie, I think the 100 fly is too long now for her in long course. SCY race is so different with the walls and the underwaters. She’s focusing on the 50 free in individual and the 100 free for the relay.
Thanks to you, I have learned a new English verb. To beg. 🙂

I realize this is a long shot, but I was surprised that Cassidy Bayer didn’t get a mention. I mean, of all the people to make a huge improvement in a year, it would be a 14 year old. At 59.9 last year, she really doesn’t need to drop a ton to be in contention.