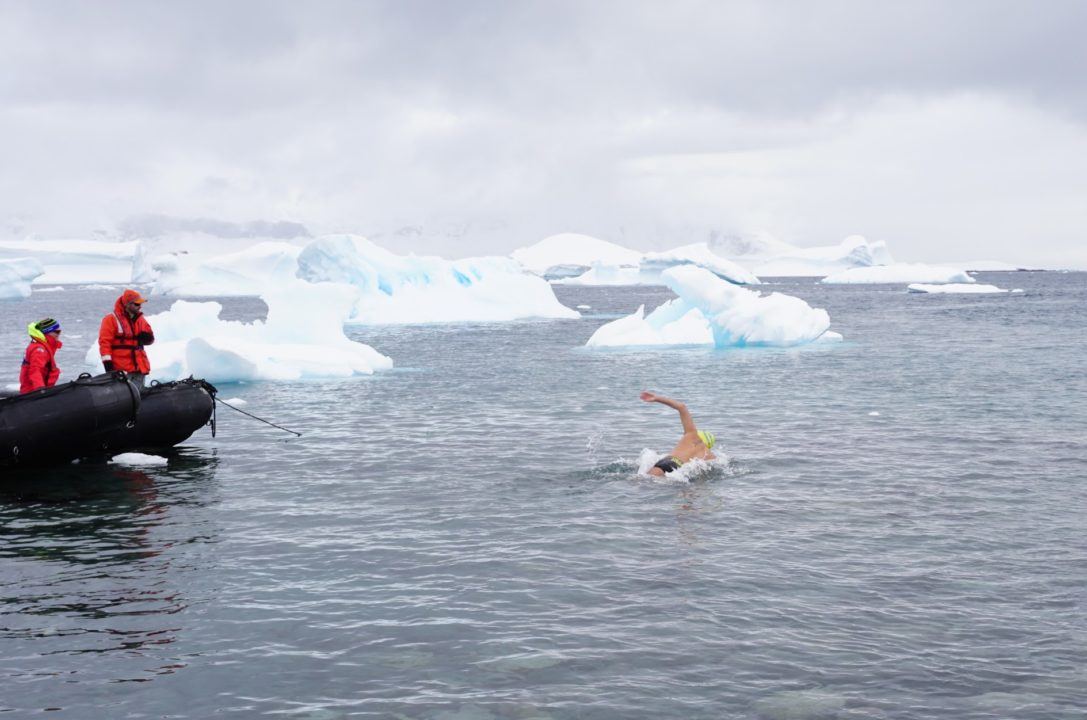 Open water swimmer Diego Lopez has completed his 2018 goal of finishing a major open water swim on each continent, wrapping things up with a kilometer race in Antarctica in late November.

“Antarctica is a very remote place and I think it was the perfect ending of the whole project,” Lopez told SwimSwam. “You think that you’re on the moon: so pristine and so virgin.”

While in hindsight the swim was seemed perfect, conditions in Antarctica were brutal. The water was -1º Celsius (about 29 Farenheight), a temperature hard to face for even the swimmers in attendance who had ample experience in 4º water (39 Farenheight). Thus, the 14-person group did a test swim ahead of time of about 200 meters to “remind [their] minds of the effect that cold water has.” After weather conditions postponed the race for a day, swimmers were split into heats and swam on two consecutive days.

He noted that in ice swimming, one’s extremities become entirely numb and swim technique becomes based on memory alone. “We’re all experienced swimmers so we know the feeling, and we just try to swim as we remember,” he explained. “I bumped into an iceberg. I didn’t even feel my hands touching it, I just felt the effect that it had. And then I kept chasing the two swimmers that were leading the race.”

Despite the qualities of the Antarctica swim, Lopez struggled to pick a favorite – or least favorite – race: “I loved them all, I hated them all – by the same measure probably,” he joked.

In Australia, for example, Lopez encountered choppy waters and high winds; in South Africa, there was the threat of sharks.  He also noted that the swims differed greatly in strategy: Antarctica was unique in that there was a physiological time constraint.

“I was always very conscious of the Antarctica swim. I think the rest you can be in the water as much time as you want,” he said. “If you have the motivation and the determination to finish the English Channel, there’s no way that it’s going to come across you. So either you take seven hours like the World Record, or you take 14 hours – that’s not the point, the point is finishing.”

In all, Lopez’s biggest takeaway from year has broader applications beyond just swimming: “The mind’s power is huge. When you get it in mind to achieve something, not only in swimming but in life, there is little that can stop you.”

Watch the stunning test swim, as well as Lopez’ video recap of his year, below: