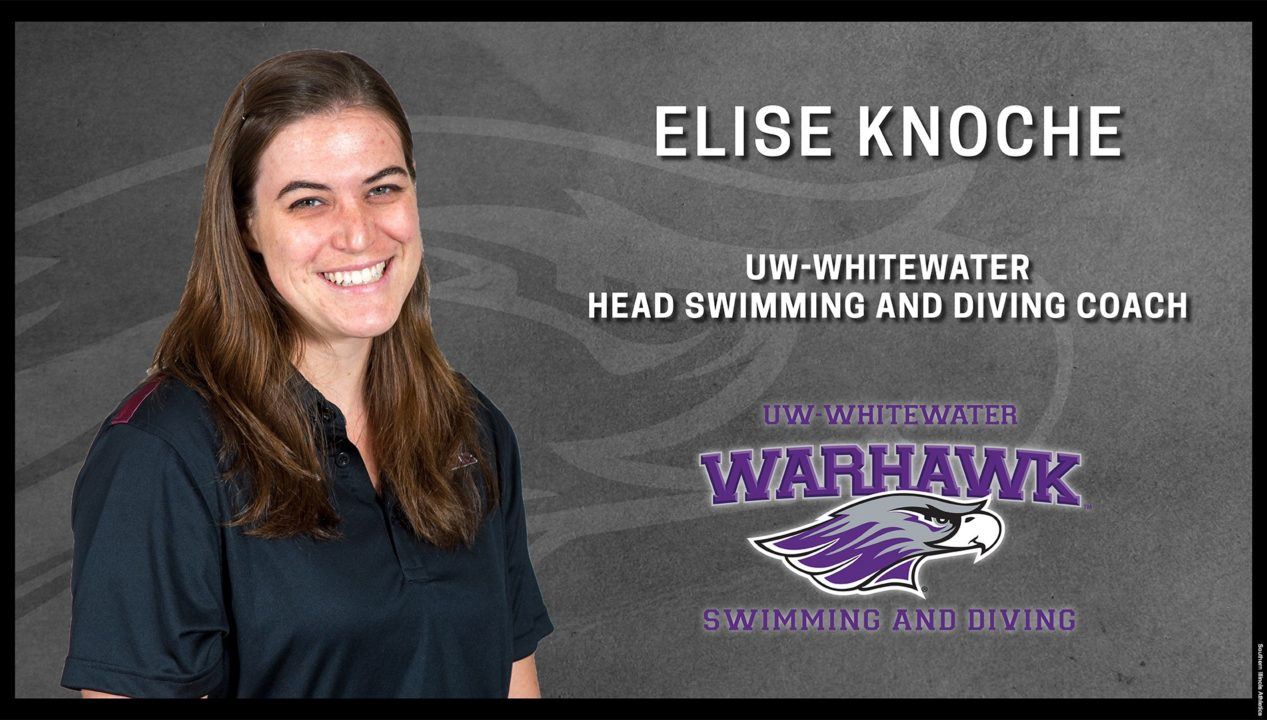 University of Wisconsin-Whitewater Director of Athletics Todd Garzarelli has announced the hiring of Elise Knoche as Head Men’s and Women’s Swimming and Diving Coach.

Knoche (pronounced kuh-KNOCK-ee) spent the last four years as assistant men’s and women’s swimming and diving coach at Division I Southern Illinois University, where she assisted in all aspects of the program and helped the Salukis post more than 80 all-conference honors and break nearly 40 school records.

“We are thrilled to welcome Elise to the Warhawk family,” Garzarelli said. “She brings a high level of energy as well as experience as a successful coach at Division I and Division III programs. Elise’s focus on coaching character to provide positive student-athlete experiences and the holistic development of student-athletes stood out as I spoke with her and others in the coaching ranks. We are excited for her to take our swimming and diving programs to the next level.”

“I would like to thank Athletic Director Todd Garzarelli and the UW-Whitewater athletic department staff members associated with the search and hiring process, as I am incredibly honored to be joining one of the premier athletic departments in Division III athletics,” Knoche said.

“Growing up in Madison, as well as both swimming and coaching in Division III, I know the stellar academic and athletic reputation of UW-Whitewater, and I am incredibly thankful for the opportunity to lead the two teams. I am excited to build on the history of success within the Warhawk swimming and diving programs, and look forward to working with the teams as we push ourselves to achieve even greater success in the classroom, pool and community.”

Prior to Southern Illinois, Knoche served as head men’s and women’s swimming and diving coach and aquatics director at Olivet College (Mich.) from 2012-14. She helped the Comets record 116 career-best performances over the course of two seasons and oversaw teams that earned multiple academic honors.

Knoche’s other college coaching experiences include stints as an assistant at St. Thomas (Minn.) from 2009-12, where she coached 19 NCAA qualifiers, at Oberlin (Ohio) from 2008-09 and at Carleton (Minn.) from 2007-08. She began her coaching career at Hill Farm Swim Club in Madison, where she was a coach, instructor, lifeguard and office staff member from 2000-06.

As a student-athlete at Carleton, Knoche garnered two All-America honors and claimed six Minnesota Intercollegiate Athletic Conference championships. She was a two-time team Most Valuable Athlete during her career and was an Academic All-American as a junior in 2005.

Knoche graduated from Carleton in 2006 with a bachelor’s in biology and from the University of Minnesota in 2011 with a master of education in applied kinesiology, sport and exercise science.

In addition to her coaching responsibilities, Knoche will serve as an instructor at UW-Whitewater in the Department of Health, Physical Education, Recreation and Coaching. She will begin at UW-Whitewater on August 22.

What they’re saying about Elise Knoche:

“Elise did a great job for our program and will be sorely missed, but I’m thrilled that she’s getting this opportunity to lead her own program. I don’t want career assistants. I want them to excel in their careers and move up to bigger and better opportunities, and I’m sure she will have tremendous success leading the program at Wisconsin-Whitewater.” – Rick Walker, Head Men’s and Women’s Swimming and Diving Coach, Southern Illinois University

“I had the pleasure of working with Coach Knoche in the Missouri Valley Conference. On deck, you can see her passion and heart with all of her athletes. She pays attention to details and goes above and beyond just simply coaching. There will be great things ahead for UW-Whitewater swimming and diving and I am excited to watch Coach Knoche lead the way.” – Amy Burgess, Head Swimming and Diving Coach, University of Arkansas at Little Rock

“I have known Elise as a coaching colleague and then as one of my daughter’s college coaches at Southern Illinois University. At SIU, she helped lead a group of young people who became an amazing team of performers and, more importantly, a team of amazing people.” – Anne Goodman James, Head Swimming Coach/Aquatics Director/Senior Woman Administrator, Colorado College

“Elise is a diligent, smart and committed coach and friend. She has immense leadership skills and truly cares for her student-athletes. I am very happy for Elise and extremely excited for the future of UW-Whitewater swimming and diving.” – Rickey Perkins, Head Men’s and Women’s Swimming and Diving Coach, University of Evansville

Congrats to Else and UW-Whitewater!