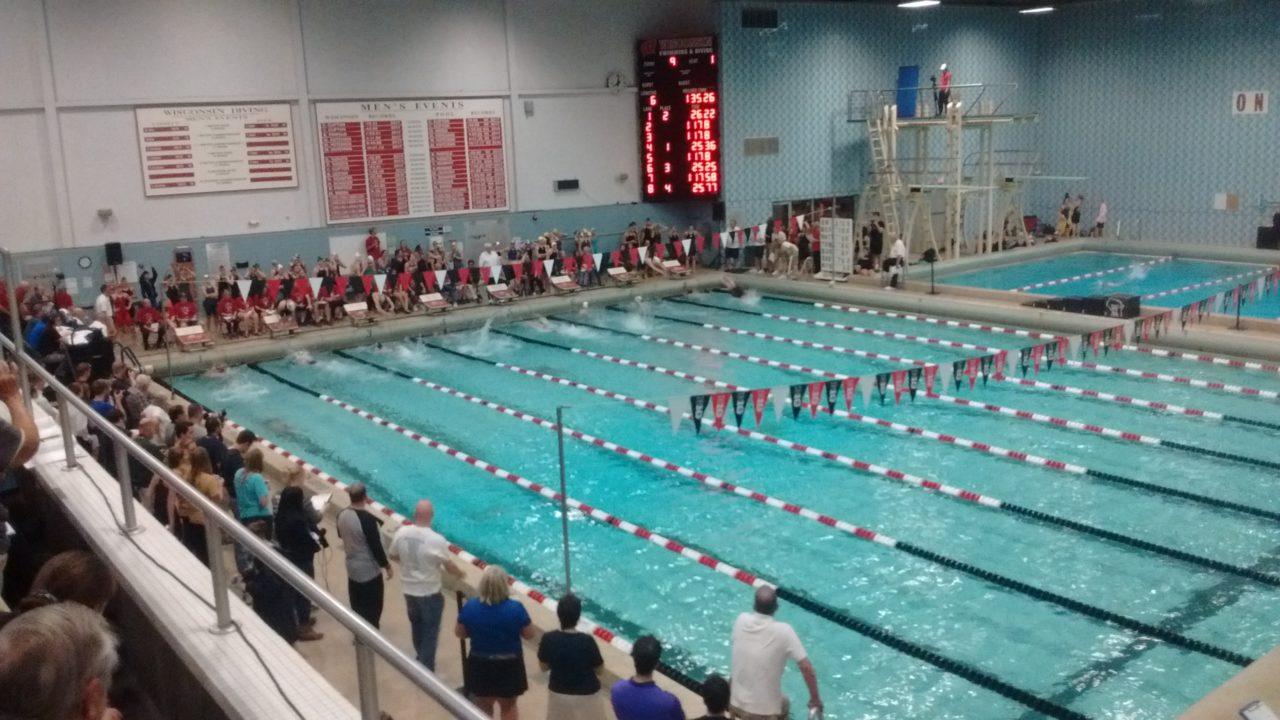 Division 2 is the small schools championship.

Edgewood comfortably won their 4th straight Division 2 (small schools) Wisconsin High School girls state championship Friday evening at the University of Wisconsin Natatorium. They finished with 328.5 points, 119.5 ahead of 2nd place McFarland who scored 209. Tomahawk were 3rd with 164, Greendale 4th with 143.5 and Baraboo 5th with 134.

The star of the meet was unquestionably McFarland senior Alexandra Moderski, a Missouri commit. Moderski’s night started with a 22.41 anchor split on McFarland’s winning medley relay, the best split in the field by over a second. She followed that up by breaking the Division 2 state record in both her individual events. Her 22.77 50 free time broke her own record of 22.84 from 2015, her freshman year. In the 100 she went a 49.68 to break the old record of 50.26, also her own record from her freshman year. The two wins raised her career individual wins total to 7, including 3 titles in the 100 and a four year sweep of the 50 free, the 4th D2 swimmer to win an event all 4 years (17th overall).

Edgewood entered the meet with a chance to win as many as seven events and ended up winning only 3, but that didn’t stop them from dominating the podium. They medaled 14 times (top 6 medal), including 9 top 3 finishes and 3 wins. Their lone individual win on the day came from junior DeeDee Walker in somewhat unconventional fashion.

Walker came down with the flu last week during sectionals. She understandably didn’t perform up to her usual standards and qualified only 9th in the 500 free. Wisconsin state meets are timed finals, so Walker was stuck in the first heat of two. According to Edgewood coach Emily Schwabe, Walker was back to full strength by Tuesday this week and it showed. Walker went 18 seconds faster than sectionals, 5:04.88, to win her heat by nearly 15 seconds. The winner of the final heat was Menomonie senior Mille Lausen who went a 5:07.84 to finish 2nd overall.

In addition to her heat 1 500 win, Walker nearly pulled off an outside smoke win in the 200 free. Walker qualified 8th in that event and therefore was seeded in lane 8. For the first 150 yards of the race it looked like a duel between Tomahawk junior Kylee Theiler and Stoughton sophomore Sofia Bormett, the top 2 seeds in lanes 4 and 5.

Edgewood picked up 15.5 points from the psych sheet, mostly on the back of Walker’s improved health. However, the biggest risers from the psych sheet were Whitewater who picked up 40 points to rise from a seeded place of 14th with 59 points to a tie for 8th with 99 points. The biggest drop off came from Rice Lake (35 points less than seed). Most of their drop off happened because they DQ’d their 5th seeded medley relay.

Looking Back and Ahead

Edgewood’s win streak is starting to reach record territory. 4 in a row ties the longest winning streak for a team in division 2 (Shorewood 1994-1997, record is 5 in all divisions). Schwabe has now tied David Westfahl of Shorewood for the most D2 titles by a coach with 4 (the record is 7 for all divisions). They have won 17 event titles over the course of the 4 year streak. This year’s team put up the 3rd highest points total in D2 history. The two higher points totals were from themselves the last 2 years (346 last year and 336 in 2016).

Complete returning swimmer totals in the table below. Under that are individual points, team scores in each event, and the score progression after each event.

How much each team scored in each event