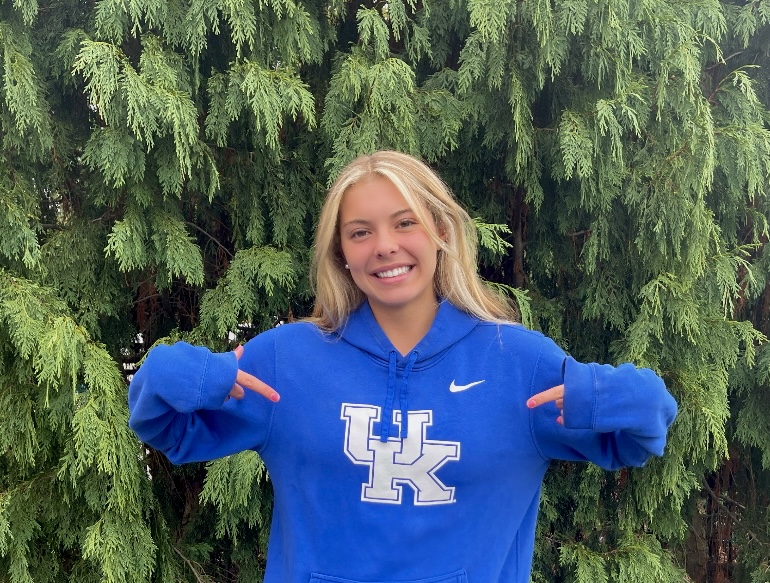 Winter Juniors qualifier Taylor Grimley (2024) has verbally committed to the University of Kentucky's class of 2028. Current photo via Taylor Grimley

Germantown Academy’s Taylor Grimley has given a verbal commitment to the University of Kentucky for 2024-25.

“I chose Kentucky because of the amazing coaching staff and because of the team culture. It’s been very important to me to find a motivated team with big goals that’s also like a family, and I’m confident I’ve found that at UK!”

Grimley hails from King of Prussia, Pennsylvania. She is one of the captains of the Germantown Academy varsity team and she does her year-round swimming with the Germantown Academy Aquatic Club. As a sophomore last year, she contributed to GA’s undefeated record in the InterAc and team title at the Eastern Interscholastic Swimming Championships. At Easterns, she was runner-up in the 100 fly (54.57) and placed third in the 200 IM (2:03.53). She earned PBs in both those events, as well as the 50 free, during the 2021-22 high school season, and she added best times in the 100 free and 100 back at the OLY NCSA Winter Invite in December.

Looks like Kentucky has put together a strong 2024 class already – 7 female commits and it’s only the beginning of October…Future looks bright in Lexington!