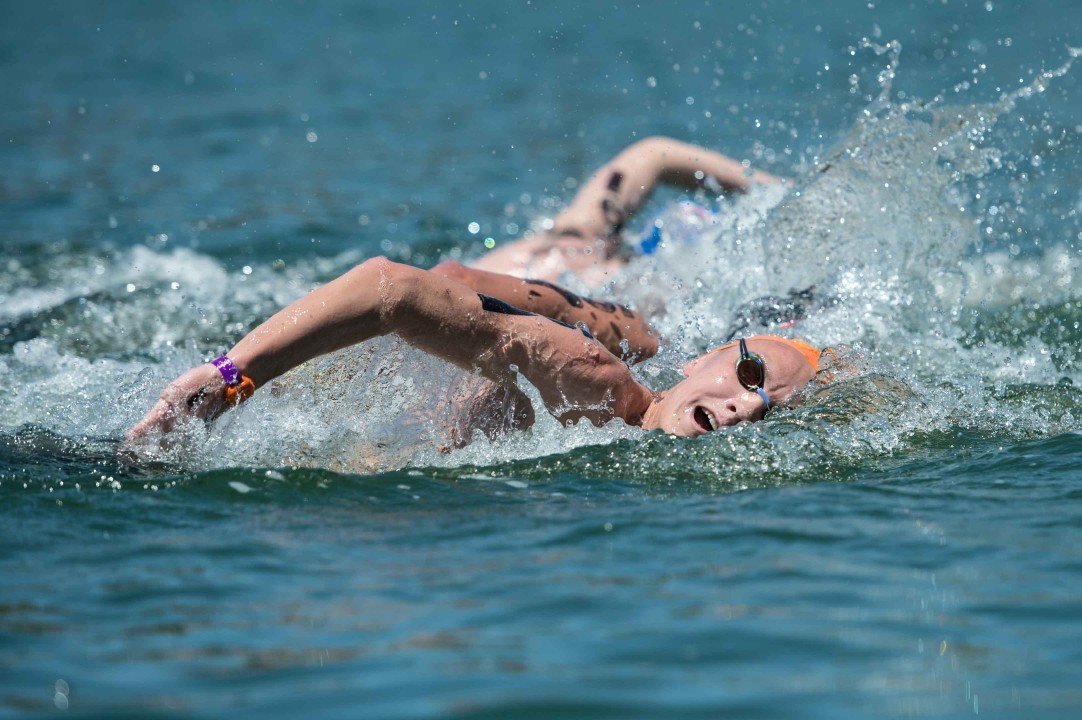 The 2019 US Open Water National Championships are scheduled to begin this Friday at the Miami Marine Stadium. The meet will take the course over 3 days, with two open events and one junior event to be contested for spots at the upcoming Gwangju World Championships and 2020 Tokyo Olympics. Specifics of the selection procedures can be viewed in the start list release.

Here are swimmers to watch for this upcoming weekend.

Aiming to once again defend his 10k title is Jordan Wilimovsky, who was also the 2017 Worlds silver medalist. David Heron will also be looking to defend his 5k title.

In the 10k last year, Heron out-touched Michael Brinegar for runner-up and earned a trip to the 2018 Pan Pacs. Heron also proved himself a strong-finisher when he out-touched Canada’s Eric Hedlin for the title in the 5k.

In 2018, Taylor Abbott formed lead packs in the beginning portions of each race, however, was not able to hold on to top positions. In the 10k, Brendan Casey was first to the touch for fourth against Abbott. Brennan Gravley and Michael Brinegar will be top-five contenders in the 5k as well, as the pair finished 3rd and 4th respectively in 2018.

Italy’s Gregorio Paltrinieri and Zane Grothe, who did not race at the meet last year, can easily make their way to the top. Paltrinieri is the 2-time defending World champion in the 1500 free as well as the defending Olympic gold medalist in the same event, making him a big threat to Heron’s 5k title. American record-holder Grothe is already on the Worlds team in the pool. Although he finished last of 14 competitors at the 2018 Pan Pacs, Grothe can easily impress this year.

In the junior 5k, last year’s runner-up Connor Hunt will be in contention against 2018 third and fourth place finishers Gabe Machado and Brice Barrieault.

On the women’s side, two different battles for the top can be spotted in two different races. In the 10k, defending champ Ashley Twichell will have to fend off 2018 runner-up and 2018 Pan Pacs champ Haley Anderson.

Third-place finisher in the 10k at last year’s meet Erica Sullivan will be contending to defend her 5k title. However, Hannah Moore, who trains with Twichell, was runner-up behind Sullivan in 2018. Moore also took 7th in the 10k last year.

More contenders for the meet are Chase Travis, Becca Mann, and 15-year-old Mariah Denigan. Denigan won the junior 5k and placed third in the open 5k last year, opening up the lead pack early on in the race.

On the other hand, Brazil’s Ana Marcela Cunha, is a very strong finisher in her races. Cunha was a 2-time bronze medalist at the 2017 Worlds in the 5k and 10k. The international swimmer can serve as a major foe in the Twichell/Anderson 10k battle and Sullivan/Moore 5k battle.

In the junior 5k, Claire Pophal comes in as the 2018 runner-up, who handily pulled away from the lead pack. With Denigan only swimming the open races, Pophal has a very good chance at writing her name on the junior 5k title.

if I had a dollar for every time this announcer repeated himself fifty times for something that only needed to be said once….

What happened to Sam Kendricks is what I wanna know :/

Yes, this dude is rough.

It’s astonishing how bad both the video production and commentary is on this.

Is there a stream to watch?

So top 2 women and men go to Olympic qualifier? As well as Worlds this summer.

Top 10 at Worlds is the first Olympic qualifier.

Hmm let us see what to watch – Grass growing OR Open Water Swimming OR Turtle Races.

OR watch your down votes rack up?

The 10K in Rio was one of the most exciting races ever! Watch this and see for yourself. https://www.youtube.com/watch?v=iQY6EoYVRxs

See you in a Tennessee Wal Mart…

Yet first to read and comment on an ow article . Hmmm