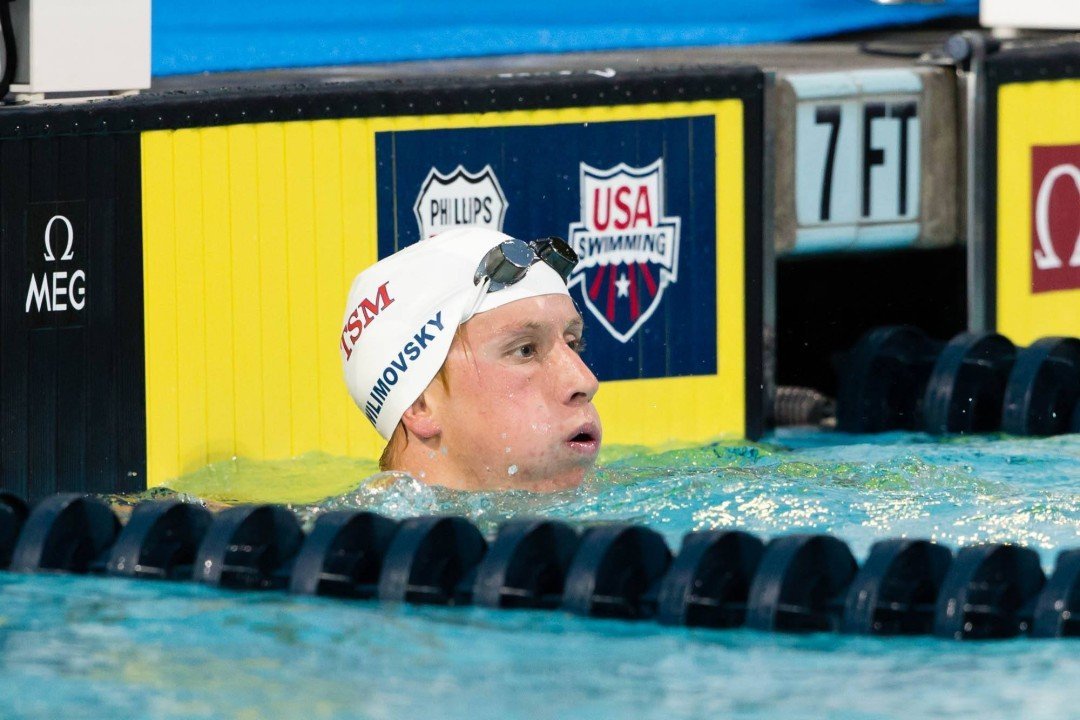 Jordan Wilimovsky (above) took the top seed for finals of the men's 1500 by almost ten seconds tonight. Archive photo via Tim Binning/TheSwimPictures.com

Earlier in the week, we chalked up a preview of this meet, which basically outlined some of the biggest names (plenty of Olympians and Olympic hopefuls to go around) competing at this year’s LA Invite at USC. The action kicked off tonight with prelims of the women’s 800 free and the men’s 1500 free, along with the 200 free and medley relays. While the shorter and more stacked events (and Dana Vollmer) will be racing later on in the weekend, Team Santa Monica’s Jordan Wilimovsky and Trojan Swim Club’s Haley Anderson each grabbed top seeds for finals in their respective races.

Wilimovsky led the charge in his first 1500 free of the season, taking first with a time of 15:34.98, well ahead of 2nd place finisher Ted Singley (15:43.15) of Trojan Swim Club. Michael Brinegar (unattached) took third place with a 15:43.42. The fifteen-year-old cut over four seconds off of his lifetime best from 2014 US Junior Nationals.

Wilimovsky, who is redshirting his next NCAA season to focus on the 2016 Rio Olympics, only has one time in the SWIMS database: the 14:56.34 from last year’s Summer Nationals. He’s well off of that time, but seeing as this likely isn’t a big meet for him (he’s focused on representing the U.S. for the 10k open water race at the Kazan World Champs), it’s a solid swim. He’ll lead all swimmers into finals of this race, which are set for Saturday.

Anderson has been as fast as 8:41.54 this season; that swim came at the 2015 BHP Aquatic Super Series in Australia all the way back in January. Her personal best, however, is an 8:26.60 from the 2012 Olympic Trials. Like Wilimovsky, Anderson excels in open water, and her focus this summer will be on World Champs, too. She’s slated to compete in both the 5k and 10k races in Kazan.

SoCal Aquatics Association took the women’s race in 1:47.92. You might be familiar with the club, which is where incoming Stanford freshman Ella Eastin trains. Eastin has times that will challenge for NCAA titles in the 200 and 400 IM already, but she put her sprint skills to the test as she swam a 26.99 third leg for SAA, which was the only relay to break 1:50. The fastest split on their relay was the lead off leg, Elise Garcia, in 26.69, just .08 off of her personal best from this June. 2nd place went to Aces Swim Club (1:50.36) and third to Neptune Swimming (1:51.01).

The Trojan Swim Club dominated the women’s race with a time of 1:54.10, the only relay to break two minutes. That relay was certainly helped by a wicked 30.62 breaststroke split from Jessica Hardy, who owns the American record in the 50m breast. Anika Apostalon, who’s now training with Trojan after she announced her transfer from SDSU to USC, led off in 30.30 on the backstroke leg, and the fly (Hannah Weiss, rising USC sophomore) and free (Evan Swenson, rising USC junior) legs were not registered on Meet Mobile’s results page.

The Trojan men owned their race, as well, winning by over six seconds with a time of 1:42.02. That relay consisted of Luca Spinazzola (25.87 backstroke), Azad Al-Barazi (28.11 breast), Jonathan Knox (24.89 fly), and David Morgan (23.15 free). Spinazzola was just one hundredth off of his personal best from last year’s US Summer Nationals.

Actually neither Anderson nor Wilimovsky have taken first yet. The 1500(men) and 800(women) are prelim final with the women’s 800 final tomorrow and men’s 1500 final on Saturday. Just a correction to make in the article.