Why the Late Breath in Butterfly is Better 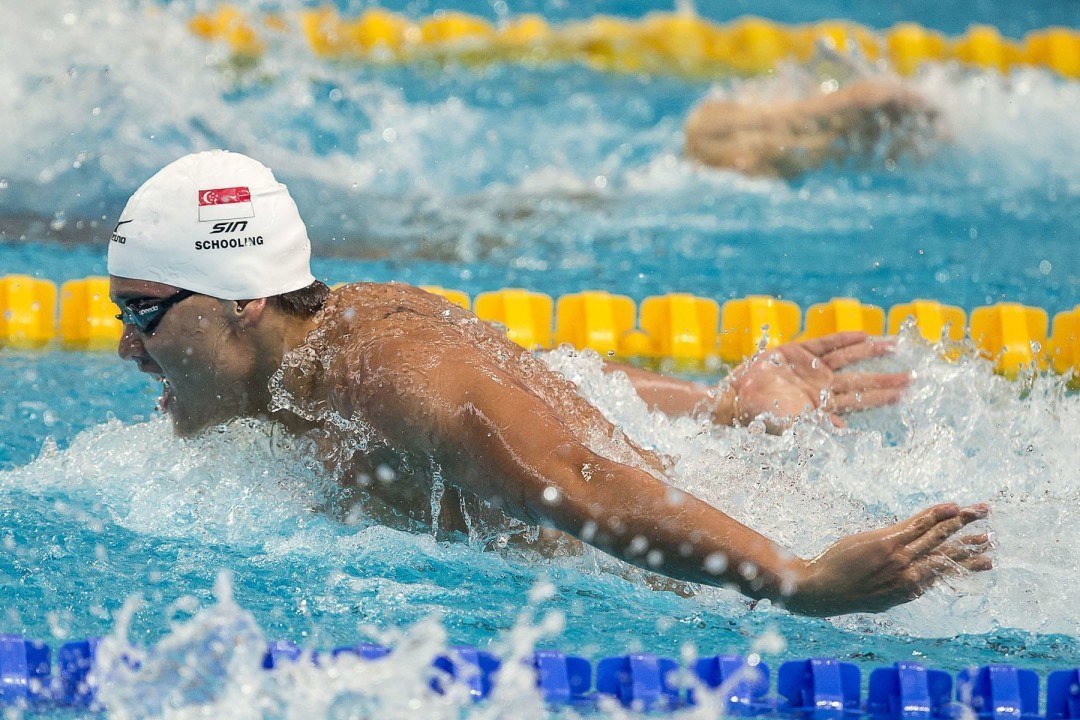 Two of the fastest butterflyers in the world today, Joseph Schooling of Singapore and Chad Le Clos of South Africa, have a delayed front breath, though they achieve it in slightly different ways. Current photo via Simone Castrovillari

When children learn to swim butterfly for the first time, they often take a late breath, pausing their arms at the end of the underwater pull before recovering the arms and taking the breath. We usually try to teach young swimmers to take the breath earlier in the underwater pull to avoid the delay in the arm recovery. While developing a faster pulling stroke rate is important in building a strong butterfly, it may be that the children have it right in delaying their breath.

Two of the fastest butterflyers in the world today, Joseph Schooling of Singapore and Chad Le Clos of South Africa, have a delayed front breath, though they achieve it in slightly different ways. Schooling initiates the head lift later in the underwater pull, while Le Clos holds the head up above water longer before dropping it down. In either case, the head snaps down later than when the front breath is taken earlier in the stroke.

The rationale for the late or delayed front breath has to do with the powerful coupling motions of the butterfly, which include the arms swinging forward during the recovery, the head snapping down and the shoulders/upper body pressing down. None of these motions provide any propulsive force, yet if timed correctly, they can add a tremendous amount of force to the second down kick in the fly cycle. The first down kick occurs when the hands are well into the propulsive phase underwater. The second down kick should be timed with the point of maximum kinetic energy of the coupling motions; when the hands, head and shoulders strike the water on their way down or forward. With the traditional early-breath fly technique, the head is already down before the second down kick occurs, contributing little or no coupling energy to this propulsive force. Similarly, the side breath contributes little or no energy to this second kick. Not so with the delayed front breathing technique.

Nothing is more demonstrative of the power of the coupling motions in butterfly than in the 2015 World University Games 200 finals of the 200-meter butterfly, where Japanese swimmer, Yuya Yajima, won a silver medal in the time of 1:55.7. What was unusual about this swim is that Yuya did that time with a stroke rate of 31, when everyone else in the race swam with a more typical stroke rate of in the high 40’s. Before that race, I would have bet my house that no one could swim a 200-meter fly in 1:55 with a stroke rate of 31. Thankfully, I didn’t.

Yuya’s technique, which has been called the ‘dolphin dive butterfly’, could accomplish that speed only through the use of a strong kick, great streamlining and powerful coupling motions. With the breath on each stroke, Yuya elevates high out of the water, arching the back (similar to breaststroke). Then he swings the arms forward aggressively, snapping the head and pressing the upper body down into a tight streamline, timing the arrival of all three at the surface of the water precisely with the second down kick. The hands are then held in front long enough to take the first dolphin down kick in this streamlined position. The result is an extraordinary surge forward underwater that enables him to be competitive with the other swimmers using a much higher stroke rate.

Neither Schooling nor Le Clos slow their stroke rates, yet by delaying the head snapping and the body pressing downward, they delay the peak of energy from those coupling motions to occur precisely with the second down kick. That leads to a greater surge forward under water after the kick. This technique is similar to the hybrid freestyle, where the swimmer with a strong kick can compete against faster stroke rates by increasing the coupling energy of the body rotation, head drop and faster arm recovery after the breath, leading to a surge forward under water.

Since all fast butterflyers have strong kicks, it makes the use of the delayed or prolonged front breath a plausible technique and worth trying. While in the 50-meter sprint, it is clearly faster to not breathe, for the 100 meters or longer, getting as much oxygen as possible is beneficial. Taking it later in the pulling cycle, rather than earlier, may just be best way to swim fly. Turns out, we may learn something from watching children starting to swim butterfly.

Despite adding more force to the coupling motions, wouldn’t a delayed breath cause the swimmer’s hips and legs to drop and thus causing more frontal drag and forcing the swimmer to exert more energy with excessive undulation?

This article should get re-posted following Joe’s gold medal victory in 100 fly.

If you watch the underwater video of the 100 fly, you can tell Joe gets a stronger acceleration during his pull compared to the other swimmers.

In watching the video of Yuya’s fly, it seems to me that it is the first kick that corresponds to his arm entry, not the second kick, which is weaker. With the early breather, the second kick seems stronger.

I usually refer to kick one during the underwater pull, and the second kick corresponding to the hand entry…although it doesn’t really matter. In Yuya’s case, both kicks are taken when the hands are held out front to maximize propulsion during the relative streamlined position.

Thanks for that clarification. I feel much better now being a late breather.

Interesting, like to see more info and results, who benefits from this (most likely not every one, but who, what body type, which muscle groups have to be prominent)
Have anyone looked at results of early breathing and breathing of every stroke and the power in the catch and the pull?

This is fascinating to watch! Thanks for posting!

I love the technical analysis in this article. It would have been even more helpful if comparative real race videos of late vs. ‘typical’ breathing was provided. But, with some clicking I’ll probably find enough samples to see it at least above water.

Leclos is a late breather because he needs time to look around.

Even in the last turn of THAT final, he was turning his head left right left right in the underwater.

Yes…by holding the head up longer, he has time to look around…but would not recommend that to anyone! It is amazing what one can get away with when you have a kick (and pull) like his.