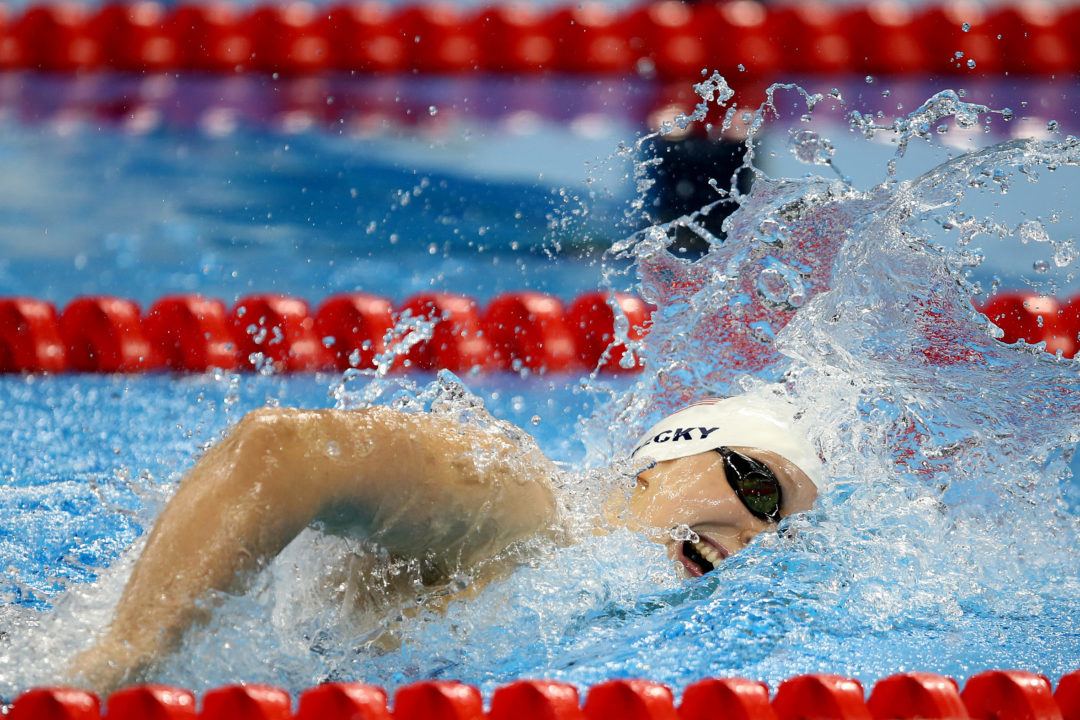 U.S. Olympic and Paralympic teams visited the White House today, where President Barack Obama and First Lady Michelle Obama honored the teams.  The President began by noting the Olympic success, “Our Olympians came in first so many more times than anybody else that it wasn’t even close: 46 golds, not to brag.”  The swim team won many of those gold medals.

USA Swimming dominated in the 2016 Olympics.  The team’s 33 overall medal haul more than tripled the achievement of its closest swimming competitor, Australia.  Several of the medalist USA swimmers attended the ceremony in the East Room of the White House today, including Katie Ledecky, whom the President noted had swum so well that she lapped competitors “like there was nobody else in the pool.”

The President also mentioned Simone Manuel as the only African American to have won Olympic swimming gold.  In discussing diversity, the President said, “We’ve become something more than just the sum of our parts.  We’ve become Americans, together.  And there’s something special about that: all races, all faiths, all traditions, all orientations, all marching together under that same proud flag, not bound by a creed or a color, but by our devotion to an enduring set of ideals, that we’re all created equal, that we can think, and worship and love as we please, and that we can pursue our own version of happiness.  That’s a great gift.  That’s what makes us strong.”

Also in attendance was Brad Snyder, the Paralympian who won three 2016 gold medals, years after losing his eye sight in Afghanistan while serving in the Navy.  After the ceremony, Snyder commented on his pride for his service to his country.

Michael Phelps did not attend.  Several times, though, the President recognized the “greatest Olympian of all time,” calling Phelps “pretty impressive,” given that historians would have to “go back to the Greeks” to find an athlete of Phelps’s accomplishments.  The President referenced Phelps again towards the end of the speech, joking to the audience, “If I keep going longer, I’m going to get the Phelps face from you guys.”

Ryan Lochte also did not attend: Lochte and the three other swimmers implicated in the gas station incident in Rio could not attend the ceremony as part of the USA Swimming sanction against them.

The overall ceremony had a water theme: the hundreds of Olympic and Paralympic athletes, matching in red jackets, squeezed into the historic East Room for the ceremony because rain water forced the planned ceremony off the South Lawn.  Also, the Olympians and Paralympics presented President Obama with respective signed surf boards as a nod to the 2020 Olympics, which will host surfing as a sport.

Interestingly, Anthony Ervin no longer considered African American. Thought he was first when he won 50m free in 2000 and did it again in Rio.

I love our President, but when he stated that Simone Manuel was the first African-American to win an Olympic gold medal in swimming, he should have added “in an individual event.” The great Cullen Jones won gold in Beijing as part of the 4x100m men’s freestyle relay. Just saying… Go Team USA!

Maybe he was speaking to the 2016 Olympics when in reference to Simone’s gold medal? I could be wrong though, I had better things to do with my time than watch him speak.