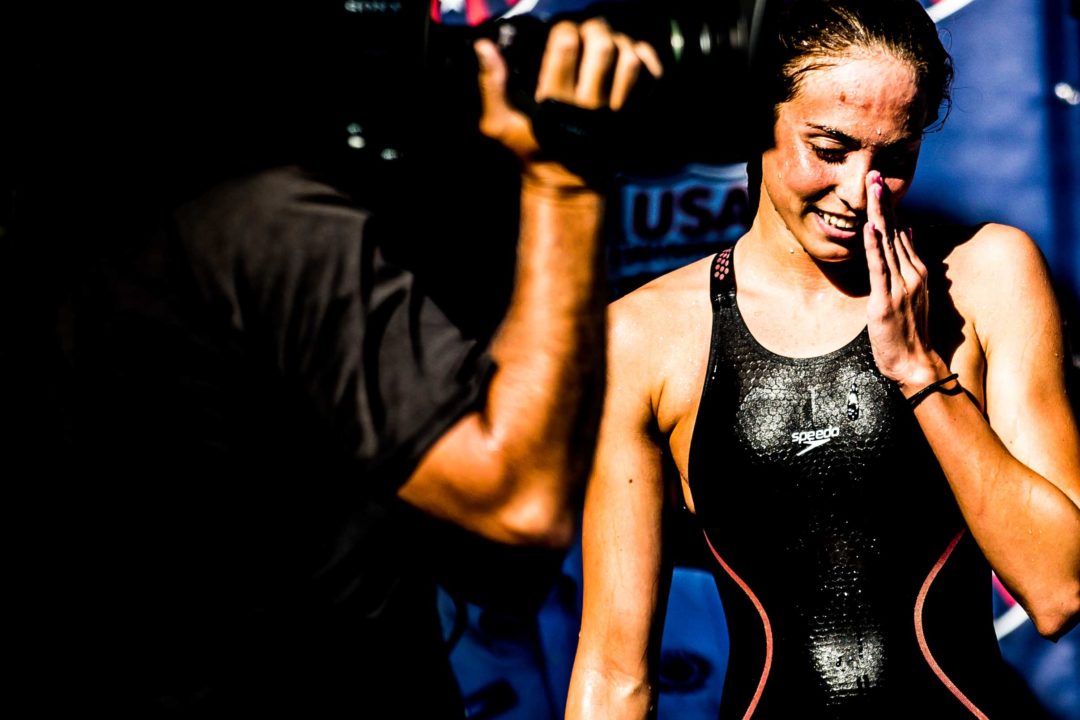 Both Weyant sisters demonstrated their readiness for Trials at the SYS Memorial meet, taking big wins and nearing best times in some events. Archive photo via Jack Spitser/Spitser Photography

The Weyant sisters dominated at the Sarasota Sharks’ most recent Long Course meet, each taking swims in their own specialties. Both girls already had Olympic Trials cuts coming into the meet, and will head down to Omaha in June. So far, Gracie is set to attend Wave I of Trials, while her sister Emma has cuts for both waves.

On Saturday, Weyant earned her first and only win of the meet in the 200 breaststroke. She narrowly missed her best time of 2:31.15 (Wave I qualifying time) set at the SYS Summer Social Distance meet in July of 2020. Weyant touched in a 2:31.50, followed by Eliza Brown, who finished two seconds later in a 2:33.42. Brown’s time from Saturday finals fell just outside of the Wave I Trials qualifying range.

In the 400 free, Weyant swam to a time of 4:23.93 to win the event by nearly five seconds. Despite her impressive victory, she still gained nearly 14 seconds in the event. Her best time in the 400 is a Wave II qualifying time of 4:09.07, which ranks her eighth overall in the nation (during Olympic Trials qualifying period).

On Saturday night, Weyant captured her second victory of the meet in the 200 free. She touched in a 2:01.39, followed by 15-year-old Addie Sauickie who swam a 2:02.79. Again, Weyant was off of her best time, but only by a few seconds. Her entry time of 1:58.36 is a Wave II qualifying time, and would put her in the top-20 in the nation for the Trials qualifying period.

Her best event of the meet came from the 200 back during Sunday’s prelims session. Weyant posted a time of 2:13.56, which was five seconds faster than any other competitor in the field. It was within milliseconds of her best time of 2:13.77, which she set at the 2020 US Open in Sarasota. The time was a Wave I qualifying time.

If you are referring to the notation in the lead of SYS, that is still what the Sharks use. Unless I missed it, that was the only Y mention that I saw. Thanks.

Braden- The Sharks have not been a YMCA team for over two years. Can SwimSwam update their info?

The Sarasota Sharks still use “SYS”. I am a shark parent here in Sarasota.