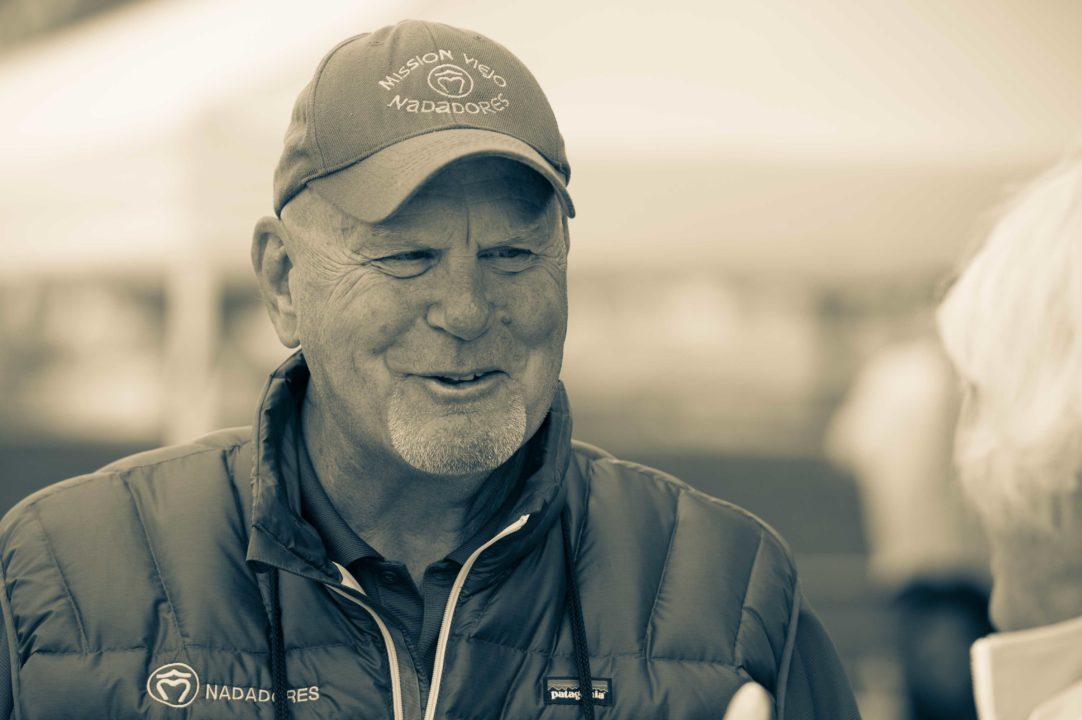 It was announced in May that Bill Rose, the long-time coach of the Mission Viejo Nadadores, would retire after leading the... Archive photo via Mike Lewis/Ola Vista Photography

It was announced in May that Bill Rose, the long-time coach of the Mission Viejo Nadadores, would retire after leading the club for 25 years. And now, the day has finally come: on December 31st, Rose will retire at 74-years old and end his tenure at the lead of one of the United States’ great distance programs.

Rose has had his hand in the training of a number of the biggest names in American distance swimming, and otherwise, in the last two decades, including Larsen Jensen and Chloe Sutton, the late Fran Crippen, Tom Shields, Ashley Twitchell, Katie McLaughlin, and Grant Shoults. One of his former swimmers, Ashley Twichell, was a breakout performer at this year’s World Championships when she won the 5k. After that gold medal, she shared a moment she had with Rose via text message – showing the bond the two had developed even though Twichell stopped training at Mission Viejo 4 years earlier – in 2013. Stories of these sort of relationships are almost commonplace between Rose, his athletes, and coaches he’s mentored.

This conversation was 30 min after finish of frustrating 10K at Worlds this past summer. 5K was two days later. #mindset @RoseCoachrose pic.twitter.com/9BwH3rRfon

“Coach Rose and I talk frequently, and I think there’s a few different facets to our relationship and his career that I’m really thankful for,” Fenwick said in reflecting upon the two’s friendship. “One, he gave me my first opportunity to coach my own groups, run my own groups, and really have my own autonomy to schedule practices, write what I thought was best, schedule meets, and really raise and develop young men. That was really a launching bad for my career, and I’m forever grateful to him for that.

“What I respect about coach Rose, and what I was able to see on a day-to-day basis and am even able to see today, through athletes reaching out, and going back to Mission, is the relationships he fostered, and I really think that’s the basis of his success, is not just the close relationship he had not only with his athletes, but his staff and the people he came in contact with. If you ever watch coach Rose walk on to a pool deck, there’s a lot of smiles, and there’s hordes of people that want to walk up to him, talk to him, shake his hand. He’s just a class act and a great human being.

“I haven’t been at Mission Viejo in 6 years, but it almost seems like coach Rose and I grow closer each year. We’ve stayed in contact, we’ve done training camps together in Colorado Springs, and it’s been a blast. I plan to bring him on the pool deck at Virginia, and just continue that relationship. All my best to coach Rose, and (his wife) Siga, and on to the next great adventure for them. Go Nadadores!”

Former US National Team Director Mark Schubert was announced as the replacement for Rose more than a year ago in 2016. Schubert first made his name as a coach at Mission Viejo from 1972 to 1985, where the team won 44 national team titles. Schubert himself is 68-years old.

Chuck Warner, a Bill Rose contemporary and fellow Hall of Fame coach, wrote the following essay in honor of the moment:

An American Rose, by Chuck Warner

It may seem odd to be writing about roses the first week of winter, but on December 31, a very special Rose will be officially retiring from coaching the sport he loves.

Bill Rose, the 74-year old head coach of the Mission Viejo Nadadores, has been an unwavering standard bearer for a culture of commitment to excellence on the American Swimming Team for one half century. During his tenure leading athletes at the University of Pacific, DeAnza Swim Club, Arizona State and the Mission Viejo Nadadores, Coach Rose has cheerfully enlisted swimmers in a joyous commitment to an arduous training routine that provided a pounding heart beat to American distance swimming at times when a pulse was otherwise hard to detect.

When the ‘distance explosion’ was taking place in America in the 1970s, it was derailed—to a large degree—when President Carter announced the USA would boycott the 1980 Olympics. The distance swimmers were the first to stop working that year and some struggled to ever resume.  A large degree of air was drained from what had been a ballooning battle to train to become the best 400/1500-meter freestyler in America and in the world, but not so in Bill Rose’s program.

The coach with the shaved head, who begot the look to his star swimmer, Mike Bruner, stood firmly for a demanding training schedule. While the boycott undercut the commitment of the biggest names in American distance swimming, Rose and Bruner doubled down on the joy of work and the love of swimming fast–for lots of minutes and lots of hours. It was in that year that Rose concocted Bruner’s 10,000-yards for time, in which each 100 averaged under one minute.

While Bruner possessed no exceptional physical gifts, his ‘talent’ for working long and hard in a program Rose designed gave him a ladder to climb to the top of the sport. The outcome at the 1980 “Trials” included Mike Bruner’s exceptional performance of winning the 400-meter and 1500 freestyles, and finishing second in the 800 and 200 butterfly.

During the late 1980s and the entire 1990s, American men’s distance swimming became extinct on the Olympic awards podium. But in 2004, for the first time in two decades, the USA had a contender to win Olympic gold in a distance race when the ‘Rose trained’ school boy Larsen Jensen, surged into international competition. Then the head coach at Mission Viejo, Rose guided Jensen to a surprising challenge of Australian distance legend Grant Hackett, when Jensen lowered the American record eleven seconds in the 1500-meters (14:45.29) in earning the Olympic silver medal, missing gold by less than two seconds.

Just like his large logbooks that carefully organize his challenging weeklong recipes for success in swimming’s toughest races, Coach Rose has helped keep alive a simple formula that has been the hallmark of American swimming success: “Work works.”

An artful motivator, this is the coach that jolted Mike Bruner from failure early at the 1976 US Trials to making the team in an ‘off event’ (200 butterfly). Four weeks later, Bruner initiated the American onslaught of medals in the Montreal Games by winning the event, and the first gold medal, in world record time.

We should not allow this man to exit the sport quietly. Perhaps a fitting tribute would be American swim coaches shaving their heads for the month of January?

That’s not likely to happen, but if we learn the lesson from Coach Rose’s stellar career then it is more likely that some coaches, and some swimmers, will embrace the joy in work and these words from the poet Dylan Thomas that characterize Bill Rose’s sustained coaching efforts even into his seventies:

Do not go gentle into that good night,

Old age should burn and rave at close of day;

Rage, rage against the dying of the light.

Though wise men at their end know dark is right,

Because their words had forked no lightening they

Do not go gentle into that good night.

Thank you, Bill Rose, for what you’ve stood for and all the moments you and your swimmers have given us. Your stoic image, extending your arms over a shiny head signaling assurance to your athlete in the pool, is one that many of us associate with American swimming success. We stand, cheer you and have often felt a sense of pride in American distance swimming because of your work. While your career beacons to the entire swimming world a vow of resolute commitment, to those in the USA we also take pride that you are, and shall always be, an American Rose.

Incredible coach and person! Wish him the best

Awesome coach & person who’s been a success at every level. Only wish I had spent a week with him on the deck. Doubt he will get bored going forward. Thanks for the great article !!

Thought he retired a few years ago.