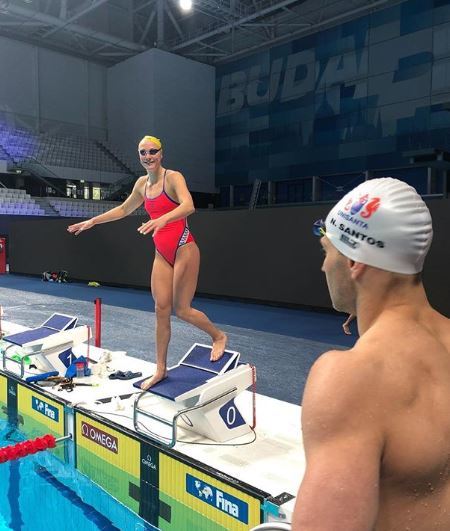 We know Swedish Olympian Sarah Sjostrom's start is incredible as it is, but even the greats take time to learn something new from one another. Current photo via Sarah Sjostrom (IG)

We know Swedish Olympian Sarah Sjostrom‘s start is incredible as it is, but even the greats take time to learn something new from one another.

After the 2nd cluster of the 2018 FINA World Cup Series wrapped up in Budapest, Hungary over the weekend, Sjostrom took some time to work on her off-the-block technique, complete with hands-on instruction from none other than Brazil’s Nicholas Santos.

Santos just busted out a new World Record in the SCM 50m butterfly in Budapest with an eye-popping time of 21.75, becoming just 1 of 4 men ever to dip under the 22-second threshold in the event. And, he accomplished this feat incredibly at 38 years of age.

The Brazilian mainstay is known for his explosiveness off the blocks, which Sjostrom also picked up on, hence her soaking up his advice on how to channel his start into her own. American Michael Andrew and Brazilian Felipe Lima are also present during the impromptu lesson, offering a few tips as well.

Sjostrom has been stellar during this World Cup Series as a whole, but Budapest was her weakest of the stops in terms of reaping gold medals. She was denied the top of the podium in the 50m free, 100m free and 50m fly by Dutch Olympian Ranomi Kromowidjojo, while American Kelsi Dahlia fired off a new World Cup Record in Budapest to win the 100m fly. Sjostrom was successful in the 200m free, however, taking gold in a speedy 1:51.60.