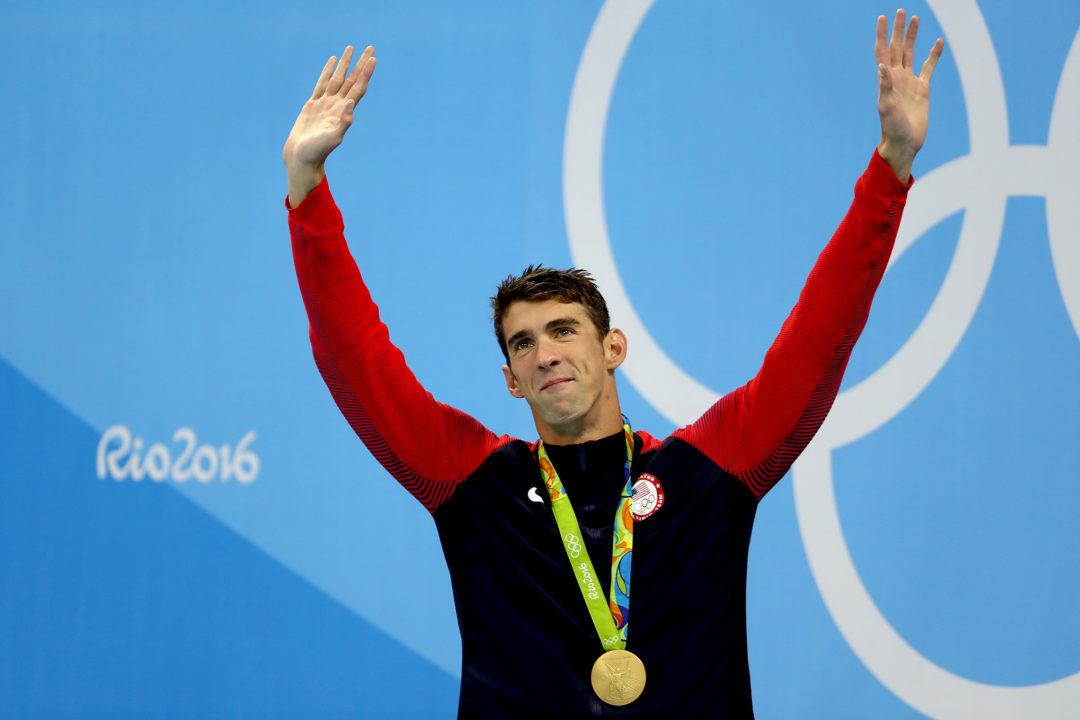 Phelps set a total of 4 individual and 1 relay World Records at the 2007 FINA World Championships, providing somewhat of a preview of the Beijing Olympics. Current photo via Simone Castrovillari

Jaws-esque music introduces viewers to Michael Phelps, described as “like a shark” by the commentator of the 2007 FINA World Championships swimming coverage for Australian audiences.

While Phelps-shark comparisons have been made for years, including a “race” between the GOAT himself and a great white shark in 2017, Phelps’ domination at the 2007 World Championships in Melbourne was anything but unexpected. This draws a stark contrast between the events that took place off the coast of Amity Island in the summer of 1975 in the Steven Spielberg blockbuster Jaws, a theme echoed by the background music played during the race videos, and the medal haul pulled in by Phelps in 2007.

Though victorious in the men’s 100 butterfly with a time of 50.77, Phelps did not have the opportunity to chase another gold medal in the men’s 400 medley relay due to an early jump by prelims butterflyer Ian Crocker, who placed 2nd to Phelps in the individual 100 fly (50.82). Therefore, the Australian team would go on to claim the world title on home soil.

Phelps’ performance in Melbourne was a preview of what he would do at the 2008 Beijing Olympics where he won 8 gold medals and set 7 World Records, with his only non-World Record performance coming in the 100 butterfly on both occasions.

Ya I remembered being super mad about that for a while. “Bu bu bu people should know he woulda had 8 the year, before, too!!”

But idk if anything it makes Beijing seem like a more singular achievement. (And it’s not like his overall career needs padding out.)

Yeah it certainly made Beijing a bit more memorable.

Thorpe was better at 2004 and before…

2007 was literally the year when Phelps was known to fully surpass Thorpe.

I always find that 400IM race interesting. Marin has probably the slowest butterfly leg I’ve ever seen in a high level meet. Does anyone know what that’s about? Or is this more common thing than I realize? I imagine it’s not since the IM transitioned from a more breaststroke friendly race to more butterfly/backstroke (and underwater in general) dominated race.

I love when videos are blocked for my country for no reason.

Phelps was just not the best swimmer, he was the best racer, loved a challenge. The Ultimate GOAT!!!

The transition into his prime between 06 and 07 he just went onto a level that no one could touch. The world records he set the year before he just blew them to oblivion in Melbourne. The 8 golds in Beijing plan went from no chance to “Wow this is more possible than impossible”.

Something I’ve wondered is, what would a 2007 era Phelps do in today’s field? Would he adapt to the competition and try to challenge someone like Milak, or would he need to specialize more in today’s age. It may be impossible for someone to win 8 gold medals ever again.

Sort of a silly question, these kids are this fast because Phelps showed it could be done.

If someone were to attempt to go for 8 golds, then they would likely have to approach it differently than how Michael and bowman did.

That’s fair but even back in Phelps prime basically everyone was specialized for the most part. He was just an outlier. There may be another eventually!

I honestly don’t think it’ll even be attempted until the fly/back/breats 50s are added to the program.

I agree with this. It was in 2007 that Phelps took the 200 fly to such heights. The world was stuck at 1:55s and without Phelps’ 1:52s starting to seem normal the world may still be at 1:53 today, which would still be really good; but it was the 200 fly that was Phelps’ bread and butter.

And on top of that, yes, of course there is time inflation so no doubt eventually Phelps’ times may seem pedestrian, whenever that may be- but the fact of the matter is that he was a pure racer, and could handle racing at 110% effort for a week and a half straight over the course of 8 FINALS, not counting the prelims and… Read more »

Question, why prelims of medley? why not flip Dressel to free and phelps to fly? that should be the finals line up. am I missing someone that should take phelps fly spot?

or is the gap between 1 and 2 in free bigger than phelps and Dressel in fly?