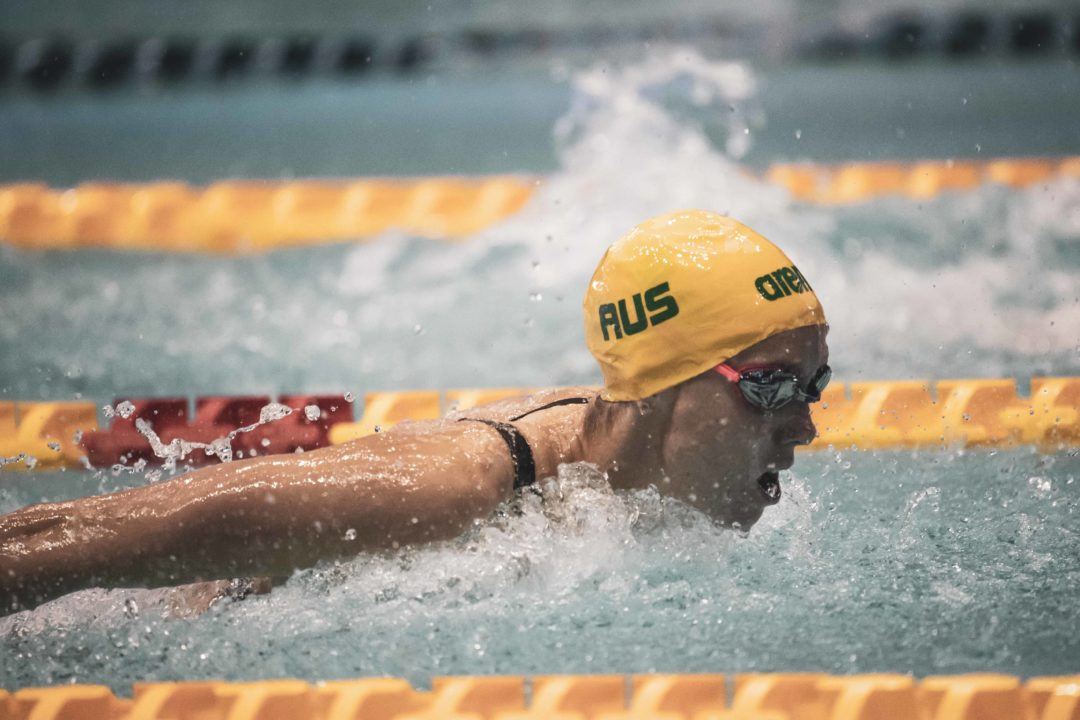 Not to be overshadowed by Matthew Wilson's 200m breast performance and Kyle Chalmers big-time 100m free was the fact that Olympic medalist Emma McKeon put up the 7th fastest 100m fly time of her storied career. Archive photo via Mike Lewis/Ola Vista Photography

Not to be overshadowed by Matthew Wilson’s 200m breast performance and Kyle Chalmers big-time 100m free was the fact that Olympic medalist Emma McKeon put up the 7th fastest 100m fly time of her storied career. The Griffith University swimmer took gold tonight in South Australia in a world-leading effort of 56.85, knocking Olympic champion and world record holder in the event Sarah Sjostrom of Sweden off the world rankings’ #1 slot.

See how the versatile McKeon, who won 200m freestyle bronze in Rio, got it done tonight to clear runner-up Brianna Throssell and bronze medalist Alice Stuart.

The top 3 finishers in tonight’s 100m fly were all under 1:00, led by the versatile Olympian Emma McKeon. The 24-year-old Griffith University swimmer split 26.59/30.26 to produce a winning time of 56.85, her quickest of the season and the #1 time in the world this year. McKeon now dethrones Olympic champion and world record holder Sarah Sjostrom of Sweden by just .01.

Western Australia’s Brianna Throssell continues to put up some solid sprinting efforts, following up on her 100m free personal best from last night with a near-personal best in this 100m fly this evening. Throssell split 27.02/30.50 to register a mark of 57.52, a time now ranked 5th in the world.

Alice Stuart of TSS Aquatics earned bronze tonight in 59.97, representing the 21-year-old’s first time ever under the minute threshold.

Emma won also a silver medal in 200 free in world championships. Not only bronze in Rio.

In an interview on a Australian TV Emma has just said she’s been surprised by her times as she is still in hard work. So definitely not fully tapered for this meet, which bodes well for world champs later in the year.