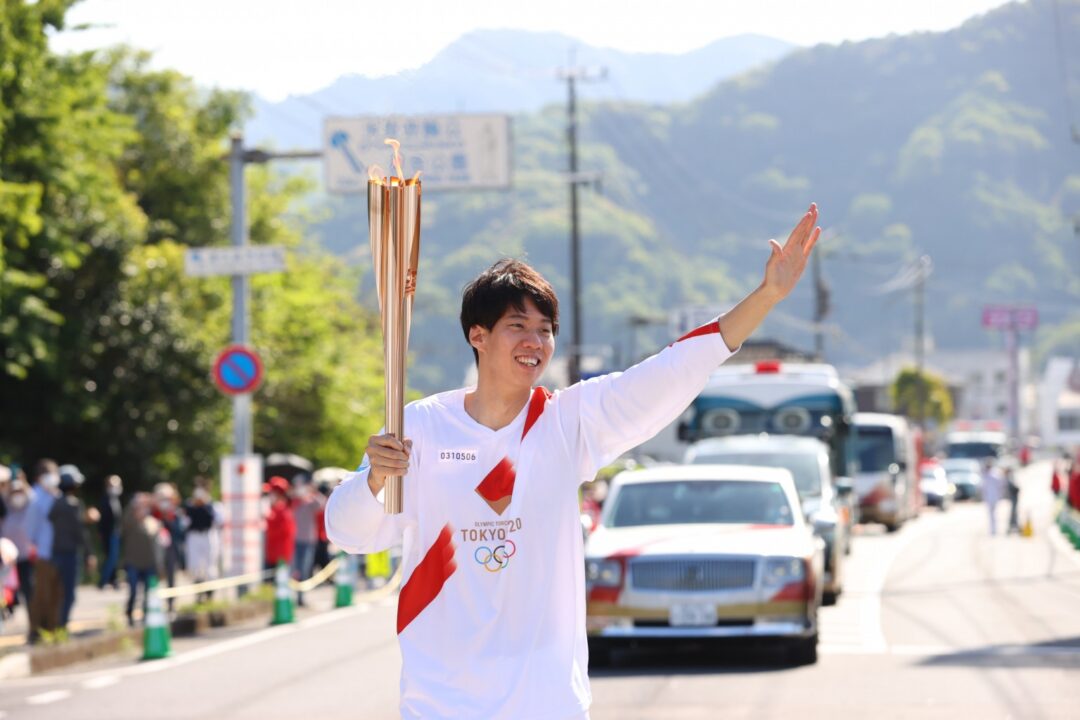 Ippei Watanabe may not have made the Japanese Olympic team for this summer's home-based Games, but he is still holding his head high. Current photo via Tokyo 2020

Former world record holder Ippei Watanabe may not have made the Japanese Olympic team for this summer’s home-based Games, but the man is still holding his head high and helping generate excitement.

24-year-old Watanabe had the honor of carrying the Olympic torch as part of the official relay over the weekend, with the breaststroking ace taking a turn in his native Oita Prefecture.

For Watanabe, the carrying of the Olympic flame was extra emotional. Although he is one of the most dangerous 200m breaststrokers in the world and potentially would have had a shot at an Olympic medal, he was denied a chance to represent his nation at a home-based Games due to two 0ther world-ranked swimmers beating him to the punch at the Japanese Trials.

Rising teen Shoma Sato Sato took the top roster spot at Trials, registering a new national and Asian record of 2:06.40 in the process. Instead of Watanabe as the runner-up swimmer in the race, it was 24-year-old Ryuya Mura who got his hand on the wall next in a huge personal best of 2:07.58. Mura’s unexpected upset swim left Watanabe in the 3rd place position and shut out of the Games.

After somewhat coming to peace with the fact he will be on the sidelines, Watanabe said after his Olympic torch relay leg, “It has been a very hard few weeks since the recent Olympic Trial, and there has not a day or time I do not think about swimming and my race.

“When I saw my family, relatives, friends, and all these people are here to cheer me carrying the torch in my hometown, I am very thankful for their support.  I am wishing everyone on Team Japan for the best.”

This has me in Spain without this S, I hope we see more from him in the future

Filled me with champagne but without the champ

I get what Khachaturian was going for here, but Littlefin’s post just caused me to bust up laughing at work. LOL 😀