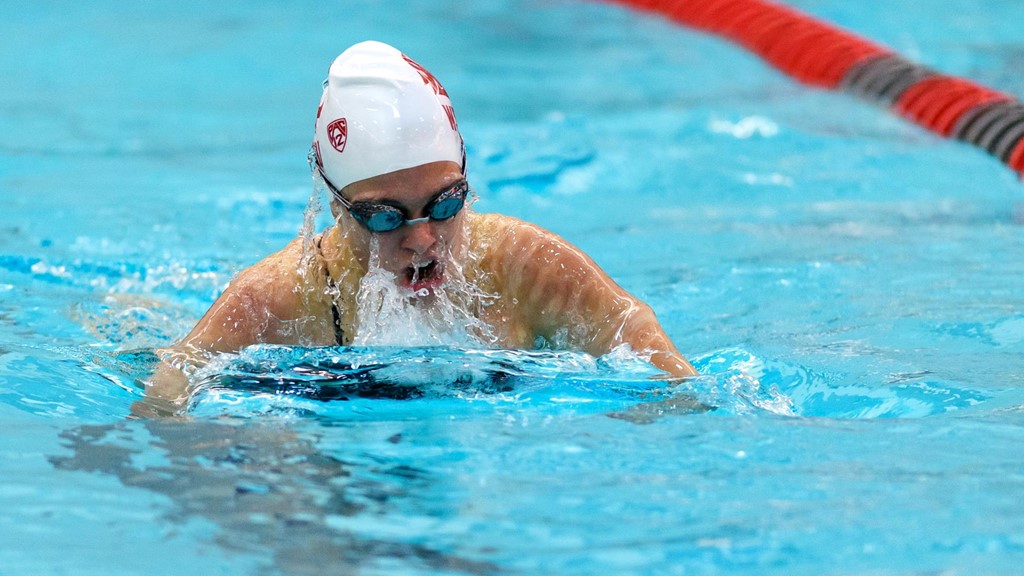 When the invite lists for the 2019 NCAA Women’s Swimming & Diving Championships are released on Wednesday morning, among the names that is expected to be included is that of Washington State sophomore Mackenzie Duarte. She’s seeded 32nd in the 200 breaststroke with a 2:09.47 from finals at Pac-12s.

That makes her the first Washington State qualifier for NCAAs since 2010, where Michaela Ahlin swam at NCAAs with a best finish of 28th in the 200 fly.

That’s not a bad start to the Matt Leach era in Pullman.

The Cougars have a small roster this year, with only 15 swimmers: of which just 1 is a senior and just 2 are juniors. But that didn’t stop the Cougars from making a splashy first appearance in the conference.

Her best time in the 100 breast improved from 1:03.19 to 1:01.66, while her best time in the 200 breaststroke dropped from a 2:15.68 entering the season to her qualifying 2:09.47. Duarte wasn’t even on the NCAA qualifying radar last season, and now she has a 7th-place finish at Pac-12s on her resume, and soon will have a national championship invite as well.

While the Cougars scored fewer Pac-12 points this season (284.5) than last season (307), the overall signs in year 1 is positive, and there are some solid recruits coming in (Kate Laderoute’s best tme would have led the team in the 100 back and 200 IM this year). But, they’ll need a lot more of swimmers like Duarte to climb out of the cellar in the Pac-12. After Oregon State announced the cutting of their team, Washington State is now the bottom of the ladder in the conference. At this year’s Pac-12 Championships, they were about 250 points short of the next-closest team (Utah), and another 300 points after that until UCLA. That’s a big gap, but there’s only one way to eat an elephant: one NCAA qualifier at a time.

congratulations Coach Matt – keep the faith, its just a matter of time

What happened to Keiana Fountaine at Pac-12? She had such a good season and then swam slower than she did during dual meets at the big championship.

Way to go, Coach. Matt was one of the most sincerely, passionate people we’ve had in Indiana in terms of recruiting, zest for the sport, etc. Success will take only a matter of time and I’m excited to watch your story unfold.

Congratulations Coach and welcome back west.

Kate Laderoute. Laura is Kate’s older sister, currently swimming for the U of Houston.

Is the water tilting or is she?