Virginia Tech Opens the Season with Sweep of George Washington 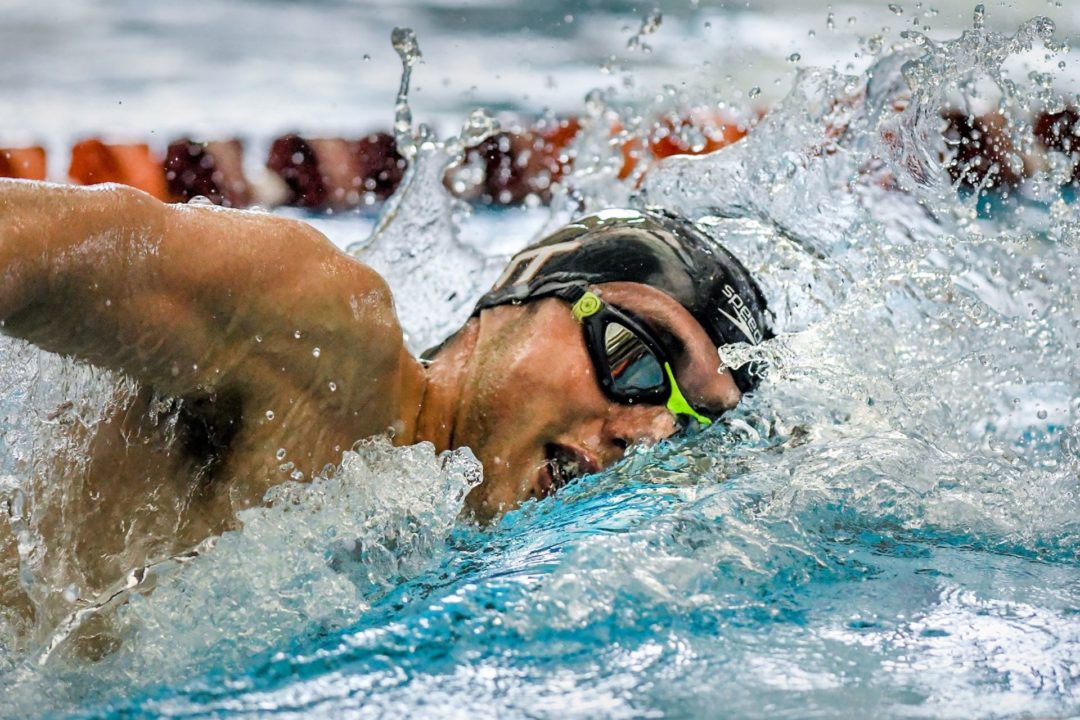 The Virginia Tech men and women defeated George Washington on both sides. Tech's men claimed a 203-87 win while the women topped the Colonials 208-87. Current photo via Virginia Tech Athletics

CHRISTIANSBURG, Va. – The Virginia Tech men’s and women’s swimming and diving teams opened the 2019-20 season in decisive fashion, defeating George Washington on both sides. Tech’s men claimed the 203-87 win while the women tallied 208-87 over the Colonials.

HOKIES MEN
The Virginia Tech men won 13 events on Saturday starting with the 200 Medley Relay as Sam Tornqvist, AJ Pouch, Blake Manoff and Thomas Hallock turned in a time of 1:30.58.

The Hokies exhibitioned the 200 IM and the 400 free relay.

HOKIES WOMEN
The Tech women also won 13 events in the first meet of the season and got off to the same start as the men, winning the 200 medley relay with a time of 1:43.23 off swims from Margarita Ryan, Joelle Vereb, Kayla Purcell and Abby Larson.

Larson secured the 50 freestyle in 24.03 while freshman Sarah Shackelford took the other sprint event, the 100 free with a time of 51.38.

HOKIES DIVING
The Hokies swept all the diving events. Teagan Moravek led the Tech women while Noah Zawadzki was the top finisher for the men.

Moravek put up the fourth highest score in program history on the 1-meter board, turning in a tally of 317.40. Zawadzki also posted a top-5 program best on the 1-meter as he scored 375.68.

“I was really happy with the diving squads today,” said diving coach Ron Piemonte. “The men’s side was dominated by Noah Zawadzki two personal bests on 1-meter and 3-meter. Freshman Joseph Perreault was consistent, shows a lot of promise. Taj Cole is coming back from injury did a real solid job and I’m real happy with where he is right now. The women were great as well. Teagan Moravek had two personal bests. Brooke Leftwich with a great 3-meter event and Rainy Vause was great on 1-meter. We had seven divers qualify for zones today. Overall I couldn’t be happier, I think the diving squad is out to a great start.”

UP NEXT
The Hokies will take to the road next weekend for a tri-meet against Penn State and Ohio State in University Park, Pennsylvania.

Against a program that sent 11 men to the NCAA Championships last season and entered the season ranked 22nd nationally, the George Washington men’s swimming & diving team had their limbs full in Christiansburg, VA on Saturday afternoon against the Hokies.

Several members of the Buff & Blue ascended to podium honors against the staunch hosts, including senior Andrew Cho, who was victorious in the 100-yard backstroke with a time of 49.96 to put nine points on the GW scorecard. Cho also rang up four points for GW in the 200-yard version of the event, clocking in a 1:51.65.

Virginia Tech pocketed the dual meet win, 203-87, but helped to prepare GW for its next test, Saturday, November 9th at Howard at 1pm.

Saturday saw the George Washington women’s swimming & diving team visit Christiansburg, Virginia to meet Virginia Tech in the Hokie’s natatorium. Last season the ACC school sent three swimmers to the NCAA women’s Championships, and it appeared this afternoon that a similar season is in store there.

The Buff & Blue enjoyed success in several events, highlighted by senior Jackie Torrez‘s impressive 200 yard butterfly win with a time of 2:03:88 in the road pool.

Senior Marissa Martin earned second place honors in the 1000-free by finishing in 10:32.40, while classmate Gemma Atherley sped to third in the 200-yard freestyle in 1:54.13.

Sophomore Rebecca Smolcic claimed a third place finish in a time of 24.23 in the 50-free, shortly before classmate Ann Juneau‘s second place worthy 200-yard breaststroke performance in 2:22.64, just .52 seconds off the lead.

Meghan Burton, a junior from Midlothian, Virginia, took third in the 100-yard butterfly in 57.10.

Virginia Tech claimed the win, 208-87, while GW is now afforded a break with its next competition coming November 9th at Howard at 1pm.