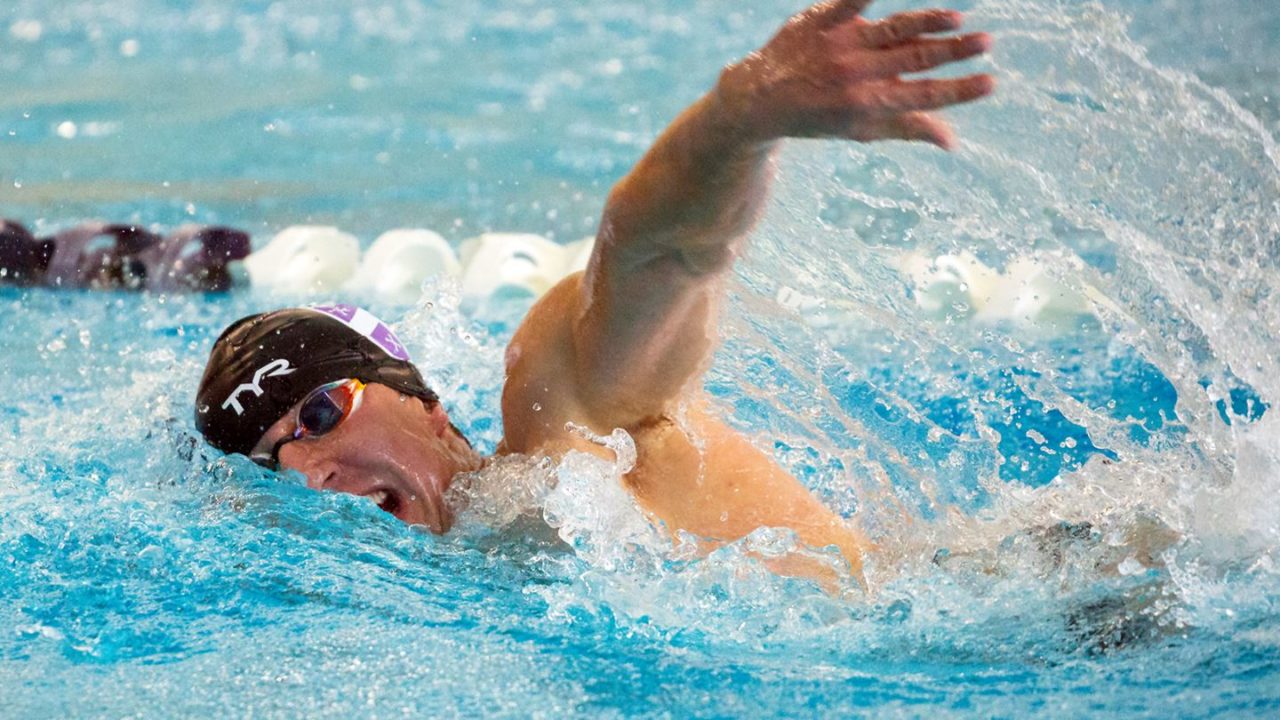 The Lords had nine individual event winners in a 198-96 dual meet win against Xavier, while the Ladies chalked up seven event wins in a 154-139 victory. Current photo via Cameron Peters, Kenyon Athletics

GAMBIER, Ohio – The Kenyon College men’s swimming and diving team showed its depth while taking down NCAA Division I Xavier University on Saturday. The Lords had nine different individual-event winners and rolled to a 198-96 dual meet win against the Musketeers.

The only two-time, individual-event winner for Kenyon was senior Connor Rumpit. He pulled off the distance sweep by winning the 500-yard freestyle in a time of 4:36.90 and the 1,000-yard freestyle 9:34.02.

Junior David Fitch won the 100-yard butterfly in 50.07 and was a part of two Kenyon relay wins. Opening the meet, Fitch joined sophomore Luis Weekes, junior Marcus Hong and senior Tommy Weiss to win the 200-yard medley relay in 1:30.46. At the end of the meet, Fitch, Weiss and Hong teamed up with sophomore Joe Black to win the 400-yard freestyle relay in 3:05.89.

In diving competition, Kenyon made a clean sweep of the boards. Freshman Drew Albrecht posted 247.20 points to win the one-meter competition and Mason Fishell, also a freshman, won the three-meter event with a score of 300.00.

The Kenyon Ladies swimming and diving team chalked up seven event wins en route to a 154-139 dual-meet win against NCAA Division I Xavier University on Saturday afternoon at James A. Steen Aquatics Center.

A host of experienced Ladies – Summer Otazu, Crile Hart, Makena Markert and Emmie Mirus – got things heading in the right direction on Saturday in the 200-yard medley relay. That quartet won the meet-opening event in 1:45.18.

After a pair of second-place finishes from Claire Murray and Ania Axas in the 1,000 freestyle and 200 free, respectively, Kenyon won again. Hart touched the wall first in 56.48 of the 100-yard backstroke. The Ladies’ third victory was delivered by sophomore Andrea Perttula. She completed the 100 breaststroke event in 1:06.53 while Market came in second (1:07.14).

A few events later, Myra Miller won the 1-meter board. Competing against two other Ladies, Miller tallied 152.10 points. She also was victorious on the 3-meter board with 181.80 points.

There were a few more quality performances from the Ladies. Axas was runner-up in the 200-yard butterfly while Mirus took second in the 50 free. Additionally, Murray secured another second-place finish in the 500 free while Otazu had the same placement in 200-yard individual medley. Finally, Alexandra White, Princess Vilan Ferguson-Nguyen, Hart and Mirus ended the meet with a runner-up spot in the 400 free relay.

The Lords and Ladies will return to competition next Friday when they host rival Denison University at 6 p.m.

GAMBIER, Ohio – Xavier swimming combined for 13 event wins in a dual meet at Kenyon College on Saturday afternoon. The Musketeers return to action next Saturday at Denison.