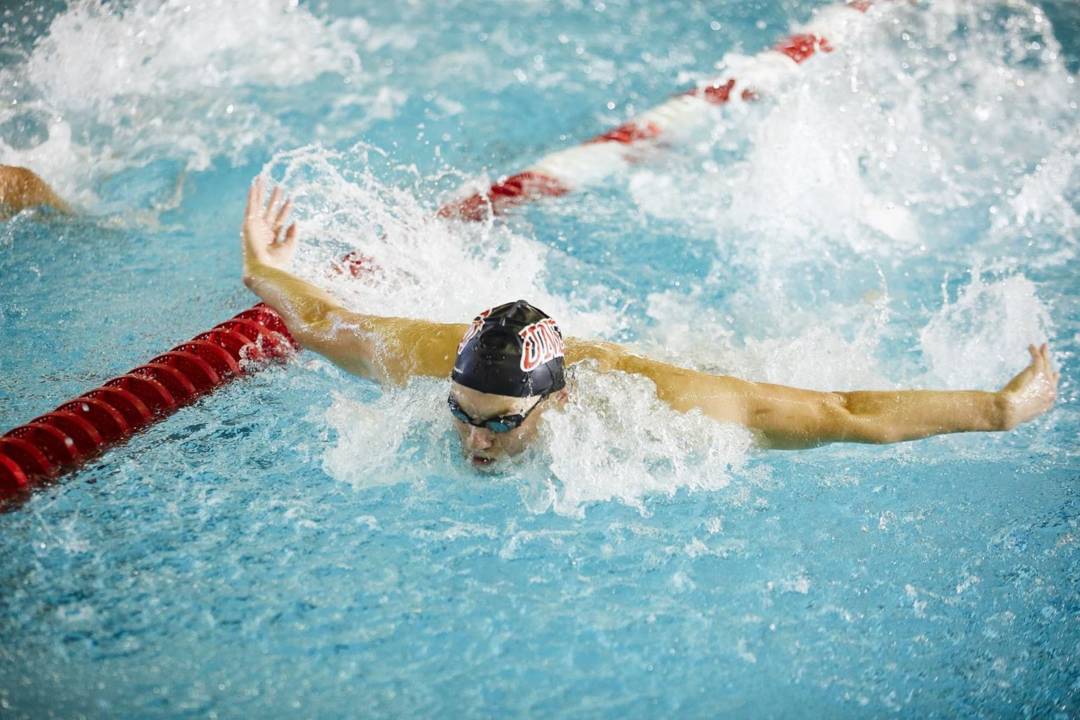 The UNLV men and women swept Cal Baptist Saturday at the Lancer Aquatic Center. The Rebel women won 220 to 80, while the Rebel men won 168.5 to 125.5. Current photo via UNLV Creative Services

RIVERSIDE, Calif. (UNLVRebels.com) – The UNLV men and women’s swim teams swept Cal Baptist Saturday at the Lancer Aquatic Center. The Rebel women won 220 to 80, while the Rebel men won 168.5 to 125.5.

QUOTABLE-
“This meet was a good chance for us to see how the team would perform coming straight off the bus. I’d say we were solid, with some good times across the range of events. We’ll need those skills in abundance this week as we road trip to Utah and BYU; the doubleheader on the road will really tell us a lot about where we are at, and how good we have the potential to be this year.”
– HEAD COACH BEN LOORZ

NEXT FOR THE REBELS: The Rebels hit the road for back-to-back dual meets in the Beehive State next weekend. UNLV faces Utah Friday at 5:00 pm and then BYU Saturday at 11:00 am.

LAS VEGAS, Nev. — The Lancer men faced off in their first WAC action, taking on a familiar opponent in their dual meet, UNLV. The Lancers ended up falling to the Rebels by a score of 168.5 to 128.5.

The team had strong individual swims, but the big stand outs of the meet were the divers as they claimed all three medal positions in the three-meter diving events. Freshman Evan Honer led the group with Tyler Stevens and Zane Freeman coming in second and third, respectively. On the one-meter boards the divers finished first, third and fourth finishing Honer, Stevens, and Freeman, respectively.

“Anytime you get to compete against another great program at home is a blessing.” Head Diving Coach Jeff Couto said, “Evan continues to impress as a true freshman, now winning three of his four ever events in his young college diving career.”

Back on the other side of the pool the swimmers had other notable performances most notably in Jacob Leahy, Josh Walters, Sean Foster and sophomore transfer Christian Meyer.

Leahy placed first in all four of his events he swam. Leahy competed in the 50 and 100 freestyle finishing with a time of 20.52 seconds and 45.37 seconds, respectively. Leahy was also apart of the 200 medley relay, with teammates Sean Foster, Josh Walters and Matthew Niculae, and 200 freestyle relay, with Niculae, Kyle White and Walters.

“Leahy had some incredible swims today and was able to get some of the best dual meet times” Head Coach Rick Rowland said,  “He really set himself up well for WAC Swimmer of the Week I feel with the performance he had today in the pool.”

Walters was the only other Lancer to place first with a tie in the 100 butterfly with a time of 50.17. Walters also had a strong showing in the two relays of the day with helping round out the meet with a total of three, first-place finishes.

Foster had notable performances as well in the 100 and 200 breaststroke events. Placing forth in the 100 breaststroke, just .97 seconds behind from the first place finisher, Foster came back in the 200 and just got out touched finishing .37 seconds from first with a time of 2 minutes and 6.8 seconds.

The Lancers will meet the Rebels again in December when they travel to Las Vegas for the UNLV invite Dec. 15-17.

The Lancer women held their first home dual meet of the season against a strong Rebel team from UNLV. CBU fell to the Rebels with a score of 219 to 81.

The women excelled most overall in the diving portion of the meet with second, third and fifth place finishes; Savannah Uhilr, Madison Liu, Kiree Lowe respectively on the three-meter boards. While on one-meter getting third, fourth and seventh place finishes; Lowe, Uhlir, Liu respectively.

“They continued to fight until the end.” Head Diving Coach Jeff Couto said, “All three Lancers made it on the podium today with Kiree leading the way on one meter and Savannah close behind her.”

The swim portion the meet was led by the underclassmen with Faith Brazil, Mackenzie Degn, and Rebecca Oviedo all having notable performances.

Freshman Brazil placed first in both her individual events, 100 breaststroke, finishing in 1 minute and 5.3 seconds, and the 200 breaststroke, in 2 minutes 22.36 seconds. Her times beat the second place time by almost two seconds in both events.

“Rebecca had one of the hardest schedules of the meet swimming the big three distance events” Head Swim Coach Rick Rowland said, “Most swimmers would have said no that they were not swimming them all in a single meet, but Rebecca just smiled and said “okay” and did a really good job in them all.”

Placing second in the 500-freestyle Degn finished with a time of 5 minutes and 4.43 seconds. She also had a strong performance in the 200-freestyle, placing third in a time of 1 minute and 53.8 seconds.

Other notable results came from Emily Longfellow and Isabella Rhodes. With Longfellow in the 100-backstroke with a fourth place finish and a season best time of 59.85 seconds. Rhodes had a strong second place finish in the 10- freestyle with a time of 52.89 second, barely getting out touched by .57 seconds.

The Lancers will face off against their first WAC opponent next weekend in their dual meet against Bakersfield at the Lancer Aquatic Center at 12:00 p.m.