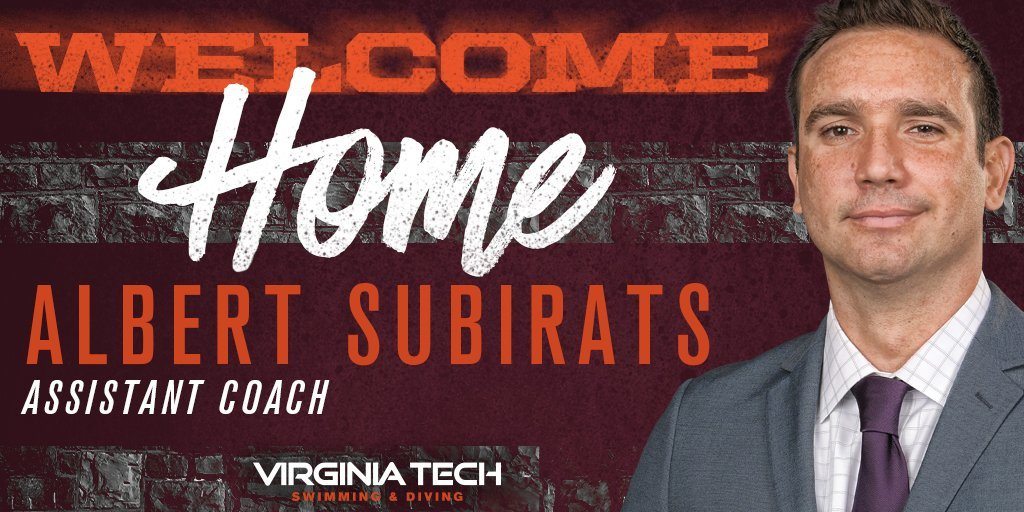 Koppelman, who has 17 years of Division I coaching experience, will leave the sport to work for Norfolk Southern Railways in Atlanta.

As he heads into his inaugural season as head coach of men’s and women’s swimming and diving at Virginia Tech, Sergio Lopez Miro has finished assembling his staff with the hiring of four-time Olympian and Venezuelan national record-holder Albert Subirats as an assistant coach. Earlier this summer Lopez Miro announced the addition of assistant coaches Steve Steketee and Jacy Dyer.

“I’ve known Albert for years,” said Lopez Miro. “We tried to work together many times when he was a swimmer, and while that never happened we did build a great friendship. He contacted me immediately when I arrived in Blacksburg and I’m honored that Albert chose to start his coaching career here at Virginia Tech. His experience as a four-time Olympian and NCAA Champion – both individually and with a team – will help our athletes grow. I know that his positive energy and enthusiasm will be a perfect fit with our team.”

Subirats holds the Venezuelan long course national records in the 100m free, 50m fly, 100m fly (also the South America record) and 100m backstroke. Along with his relay teammates, he also holds records in the 4x100m free relay and 4x100m medley relay. He is a three-time winner of Venezuela’s Sportsman Athlete of the Year (2006, 2007 and 2009) and is the most decorated swimmer in the history of the South American and Central American Games.

Subirats graduated from Arizona in 2009 with a degree in business administration, and from Nova Southeastern in 2016 with an MBA.

His 50 back that year leading off the 200 medley relay that got lost to history due to a DQ was still one of the most absurd swims I’ve ever seen relative to the competition.

Thank you for this! I hadn’t seen this version before, that’s awesome!

He was the best underwater dolphin kick guy I ever saw. Unbelievable.

Pick up for what..?? He has no coaching experience at the college level …he has been working in marketing and public relations (accounting).

Dude he has to start somewhere…besides don’t you think his experience as an elite swimmer gives him a little advantage?

Starting a coaching career at a D1 school isn’t exactly a normal starting point. So many coaches pay dues coaching on age group teams 50 weeks a year for many years, and are excited for a D3 opportunity. Yes, he was very very fast, and I am sure he has a ton to offer the program, but this is quite the fast track. I am hoping for the best, but just because you know how to swim doesn’t necessarily mean you know how to coach an athlete at this level. Good luck to everyone at VT this season, it’s going to be an interesting one for sure!

So much politics in the choosing of a D1 college assistant. Might be an extremely smart hire not only with his swimming knowledge , but his connections to South America and Sergio to Spain and Europe.He can learn and continue to learn just like all coaches. Best wishes in his journey !

He did coach a club team in south Florida “Midtown Athletic Club” so do your homework before you go on talking about stuff you don’t know….wish the guy good luck.

Not that I am pearl clutching, but wasn’t there a cocaine positive test at one point too?

No that was Omar Pinzon

Was he a volunteer at Nova?