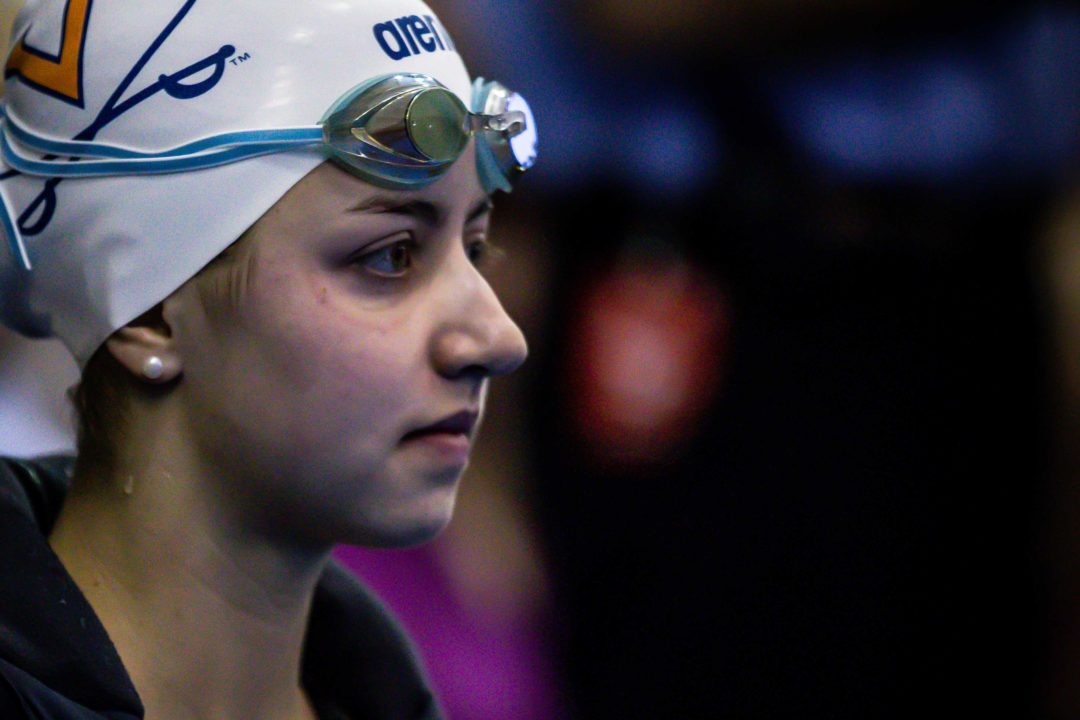 Versatile Virginia sophomore Kate Douglass might swim the 100 IM this weekend at an intrasquad, chasing the fastest-ever time in the event. Archive photo via Jack Spitser/Spitser Photography

The Virginia Cavaliers, whose women’s team is the favorite to win the 2021 NCAA Division I Championship, if that meet happens in the coronavirus spring, will kick off their 2020-2021 season next Friday and Saturday with a two-day intrasquad meet.

The ACC is leading the way into the 2020-2021 NCAA swimming & diving season. What that season is going to look like in its entirety is not quite clear yet, but the ACC is wading in with intrasquad meets, including one by Georgia Tech this weekend.

Virginia’s intrasquad this weekend will feature a full NCAA event cycle in yards on Friday, and a full long course schedule on Saturday. According to the program’s associate head coach Tyler Fenwick, the team will be wearing racing suits for the event.

Head coach Todd DeSorbo plans to have events like this every 3 weeks or so until a more normal swimming season can be resumed.

The team has only officially been back to training for 2 weeks, though members of the team have been training for varying lengths of time depending on what their summer setup has been. All athletes, and coaches, were required to quarantine for 14 days before the start of the season.

While not formally on the event schedule, chatter around Charlottesville is that versatile sophomore Kate Douglass, who came to Virginia as a sprint freestyler but became one of the country’s best 200 breaststrokers as a freshman, may swim a 100 IM.

The NCAA approved the 100 yard IM as an official NCAA event in 2015, though it still isn’t raced at any of the 3 NCAA Championship meets. The current fastest time in USA Swimming’s database in that event is a 53.02 done in 2014 by Olympian breaststroker Katie Meili.

Neither USA Swimming nor the NCAA has published official records in the 100 yard IM.

The Virginia women were seeded to score the most swimming points at last year’s NCAA Championship meet, 69.5 points ahead of the next-best team Tennessee. The defending ACC Champions are bringing in even more firepower this year. While they’re graduating 240 points from last year’s ACC squad, including the conference champion in the 100 free Morgan Hill, the Cavaliers are bringing in one of the best-ranked classes in the country this season.

In the spring, SwimSwam’s Jared Anderson ranked their incoming freshman class #2, but #1 Stanford has already lost at least 2 from its class for this season: World Record holder Regan Smith and #6-ranked recruit Lillie Nordmann, who are both deferring their enrollment until the fall of 2021.

The Virginia men, who finished 2nd at last year’s ACC Championships, graduated more points, 256, which accounts for about 31% of their individual ACC Championship scoring last season.

Their income men’s recruiting class was ranked 9th by SwimSwam’s Jared Anderson, with sprinter Matt Brownstead, who already has an 18.6 relay split in the 50 free to his name, leading the group as the most immediate-impact.

I hope the event is streamed in some sort of way, even if its just Facebook Live or Instagram or something.

I know they’re working on it. We’ll post a feed if there is one.

Tough schedule for back strokers. Back to back on their backs

Looks to be NCAA format, I’d bet they take extra breaks between the “days”