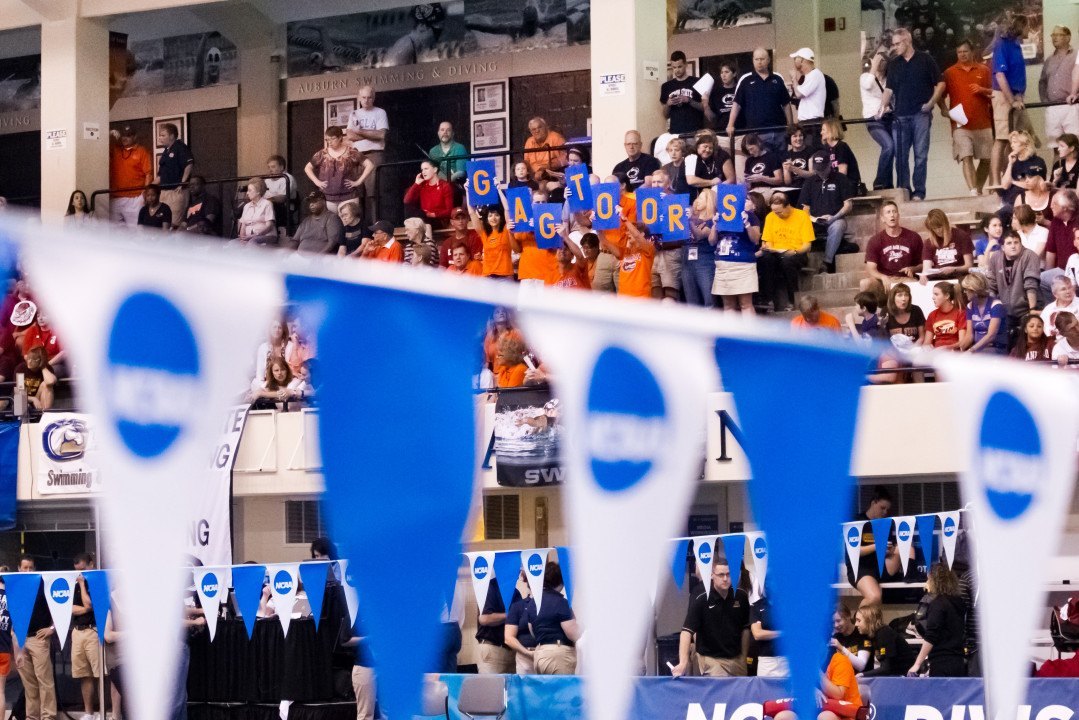 The NCAA has unveiled a sweeping set of new events and rules for the 2015-2016 college swimming season that will... Stock photo via Tim Binning/TheSwimPictures.com

The NCAA has unveiled a sweeping set of new events and rules for the 2015-2016 college swimming season that will be among the most fundamentally-transforming changes in recent history.

We will break down many of these changes in separate articles, but there’s two key themes among them: one is to bring the NCAA in line with FINA rules, with regard to approving backstroke starting wedges, and the breaststroke pullout. Both of those rules were approved for USA Swimming and FINA sanctioned competition in December of last year, which left a gap in the rules between those events and college competition.

The other is a preliminary expansion of NCAA events. While no new events have been added to the NCAA Championship schedule, both synchronized diving and the 100 IM have expanded the opportunity for coaches to add more wrinkles to the standard meet schedule.

More to come on each rule change. The full release from the NCAA is below.

The NCAA Playing Rules Oversight Panel on Wednesday approved synchronized diving to be an optional event in non-championship and invitational meets starting in the 2015-16 academic year.

The use of synchronized diving must be mutually agreed to by all the coaches involved in the meet or invitational.

A synchronized diving competition will consist of five dives from each same-gendered pair, and a minimum of three diving judges must be used.

The panel also approved making the use of backstroke starting blocks permissible for next season.

The devices have already been developed by manufacturers and the NCAA Men’s and Women’s Swimming and Diving Committee wanted to allow swimming programs the choice to use them. The backstroke starting blocks are designed to help prevent competitors from slipping at the start of their races.

The panel also approved a rule allowing conferences to add the 100-yard individual medley to championship competition. It is not required.

The event will follow the 1,650-yard freestyle competition on the final day of the meet. The race is commonly held as the last event of international meets.

Other approved rules changes include:

• After the turn in breaststroke races, swimmers will be allowed to do a single butterfly kick before their first breaststroke kick.
• For all starts involving deaf or hearing-impaired swimmers, a strobe light should be positioned so swimmers can view it.

If they r going to add the 100 IM, why not add more 50’s? Would love to see 50 Back, Fly & Breast. There’s nothing better then the Men’s 50 Free, it just shows pure speed. I’d really like to see these added as Olympic events also.

This just in…. The 100 Yard T-shirt Relay and 25 Corkscrew will now be added to the 2016 NCAA Swimming & Diving Championships.

…and once again the NCAA has screwed over the 100 synchronized IM fans.

I thought I would be done with summer league soon. 100 IM is a joke even in summer league for anyone over 14. Bad idea. You will have 8 swimmers so close to each other switching strokes every 5 seconds you will not be able to see anything. Yuck!

This is the best change ever for people who are good at all the events but are sprinters!
Do you think they will add it to younger age groups?

Ryan Lochte is the best 100 im’er. He used to own the scm wr in 50.71 which converts to a 45.68 in scy. As far as the current NCAA goes it’s a toss up. Murphy, Conger, and Schooling would be 1,2,3 at the 50 with Seliskar and Dressle close behind. Seliskar would catch up in the breast but I don’t know by how much. I think it would take a 45 high to win and it would be really fun to watch. I think after a year at cal Seliskar would win. He went a 54 scm IM in a summer league meet without a block last year.