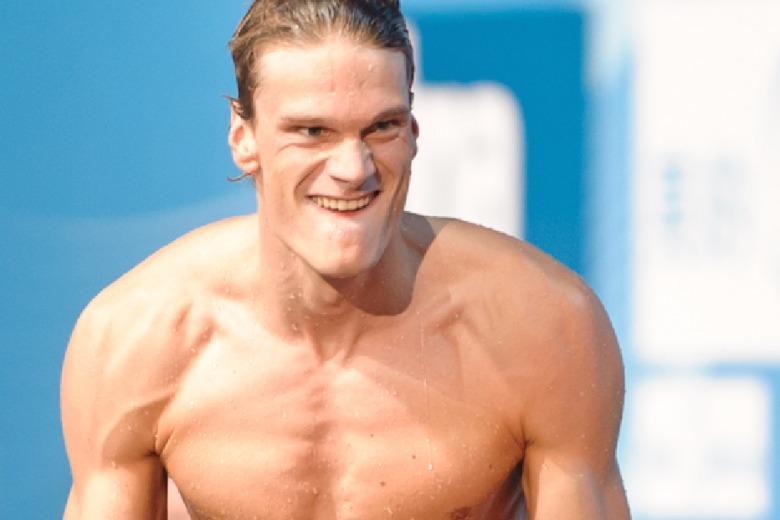 If you have been following the coverage of 2016 French Elite National Championships in Montpellier you know that there was... Archive photo via Victor Puig

If you have been following the coverage of 2016 French Elite National Championships in Montpellier you know that there was a controversy during last night’s final in the men’s 200 freestyle. If not, you can catch up with our articles:

As you can see in the race video below, defending Olympic champion Yannick Agnel of Mulhouse and Jérémy Stravius of Amiens led throughout and were barreling down the last 50. Stravius accelerated and moved ahead to hit the wall in first place, but it appeared that Agnel touched the wall just behind. When the results displayed a few seconds later, however, Jordan Pothain was listed as runner-up ahead of Agnel. The commentators are incredulous and assume it will be corrected in Agnel’s favor.

In the appeals process the referee argued that the video was unofficial and therefore not to be used as evidence, and that after looking over all the data coming from the timing systems they would not overturn the final rankings: 1. Stravius; 2. Pothain; 3. Agnel.

That is absurd. Shame on the Frenchies for not making the right call on this.

He touched first, I am convinced now. Unbelievable.

Having watched the video, Stravius was first, but Agnel was nearer him than Pothain near Agnel.

Is Pothain related to the touch pad engineer or something?

The 2nd place means a big deal because France will bring at least the top 4 for an 800 free relay. Since the top 2 will be at the meet anyway, they will swim the individual. My bet is Pothain will give his spot to Agnel due to intense French public/media pressure.

None of the swimmers were under the French Q-time

I know this. That is why I bring up that they will be in Rio for the relay. If they are already at the meet, they would be put in the individual.

I’m going for an unpopular opinion here, concerning the 200m free from yesterday. I’m not disputing Agnel actually was faster to the wall than Pothain. However, I think his touch registered later than Pothain rightfully. I reviewed the underwater footage and Agnel’s finish was a disaster. He touches the pad extremely low with a lifted head, totally out of streamline. The direction of his hand movement at the point of touch is downwards instead of straight into the wall causing the delayed “touch”. This in contrast with the finish of Pothain. I think the touch panels actually registered Agnels touch 3rd, just because of how they work, not because of a fault.

can you drop the link of this footage, if it can be viewed in the US?

Hmmm, too much distance between Agnel and Pothain..
I agree that Agnel finish was slow and he touched the pad extremely low, but he was clearly in front of Pothain.

Where did you find the underwater film?
Even without seeing that I was thinking something similar.

Sure about that? Look for the shadow of his arm/hand to join his hand for the actual touch, after that the panels actually require a slight push before they trigger. His hand movement is downwards, which means it takes a fraction longer before the “touch” registers.

He is clearly second “at the wall”, I suspect he is actually 3rd “at the touch”.

Everybody is upset but, in my humble opinion, at least part of this mess is due to Agnel himself.

Anoncoach, your assumed name tells me that yours is an expert’s opinion and I respect it. I just can’t believe that a bad finish can account for such a delay. Agnel seems to touch well ahead of Pothain ,yet his official timing is .17 slower. What did he loose there, half a second, 0.4? It just does not seem right in an age where you can loose a race by 1/100. I remember Magnini in Montreal 2005, he touched with his head lifted and many commentators said he had left a few hundredths there, but this is like an eternity.

Then again, this version of Agnel is not going to medal in Rio anyhow, so the damage is limited. But… Read more »

Where is this fabled underwater footage? Pothain was still taking his last stroke as Angel went into the wall. It just doesn’t look physically possible.

So was Phelps vs. Cavic in 2008. Not just the one who touches the pad first, but who depresses it enough to register a time. Seems like he has only himself to blame for the crap finish, of which most age groupers would not be guilty.

I’m not sure the phelps/cavic thing is parallel. Phelps may have indeed touched first (rather than Cavic just poorly depressing the pad). Phelps last over-water recovery was whip-fast while Cavic was gliding. Referring back to “sane swim parent’s” comment, it’s true that phelps was taking his last stroke AS cavic went into the wall. That’s different than Pothain taking his last stroke while Agnel was actually ON the wall. So, I think Phelps/Cavic is a poor analogy to this situation.

See link to French site above. At the end there’s an underwater shot of the finish (from below/behind the swimmers).

Agnel’s finish was terrible, and maybe that should cost him a few hundredths — but this wasn’t that close. And he DID hit the pad. He hit low, for sure, but he wasn’t close to missing it altogether. Pads are supposed to be plenty sensitive to register a touch like that. If you watch the underwater video (3:10 in video above), this is not a close call. Hit pause around 3:12-3:13 you can see this clear as day.

Did you guys watch the video? It ends with the underwater footage. Angel is clearly first to the wall, but the panels require the swimmer to push into the wall. There is no fault in the timing, he just totally messes up his finish. I encourage you all to watch it frame by frame…

This being said, there should absolutely be an discrepancy between the manual times and the automatic time. However, we don’t have access to that info. Shame if he misses the OG because of this.

is there an actual FINA rule somewhere that stipulates that a swimmer needs to hit the wall with the requisite force needed to activate the touchpad? if so, what is that force? where do you draw the line between mechanical malfunction and swimmer error?

if you’re the first to touch the wall, you win. the onus is on the officials, the sport, and the technology we use to correctly observe, record, and acknowledge that. if there is conflicting evidence of when a swimmer touched, as you have in this case (video evidence, back up times, and the recorded touchpad times) then it’s the responsibility of the officially to make a good faith effort to weigh all the evidence and… Read more »

Not entirely sure Phelps touched the pad first vs Cavic.

Do a google image search. Phelps clearly touches the wall first. It’s not even debatable. 0.01 seconds is almost an inch and is readibly decernible by the human eye (not in real time of course). If the hand is approaching the wall straight at full speed, the touch pad will register faster than 0.01 seconds. The idea that Cavic touched first but without the force necessary to trigger the touch pads is complete nonsense and is irritating that this notion persists. He glided and lost.

This opinion is meritless. Who gives a rats-&^% if he finished sloppily. If he touched first, he touched first. Whether his head position, hand angle, etc. would make an age-group technique coach fume is irrelevant. He went 200 m before the other guy did. You wouldn’t discount a home run in baseball if the swing execution was sloppy but the hitter still managed to muscle the ball over the left-field wall.

Easy there, I was just giving my opinion. And the fact is they use touch pads to register time which require a touch with relative force. That’s part of the game, every swimmer knows this. I’m not saying it’s fair, but part of the drama is due to an extremely sloppy finish from an olympic champ.

This is insane, order of finish judges who, if they didn’t catch this, should be suspended from officiating.. If this isn’t a conspiracy I don’t know what is.

Conspiracy? Perhaps masochism..( and above all an incredible disorganization).

Agnel was the star of the race, every French wanted him at Rio to defend his title in the 200 free, even Pothain after the race was sorry to be second.., and so what conspiracy?

Yes, what other explanation could there be? Pothain doesn’t have to be a part of it, he can merely be a pawn like any other athlete. Every Frenchman and woman wanted him there? There isn’t anyway possible someone up at the top didn’t like him traveling to the US to train? Given how the many NGBs and FINA operate, nothing can out of question.

I don’t know how it works over there or anywhere else, but over here there are people who watch the order of finish. In all USA Swimming age group meets there are backup buttons, stopwatches, order of finish judges all to help with touches should they not be good or a kid misses the pad. Although… Read more »

It looks like Agnel is 2nd, but with a finish like that you slow down a lot. Think back to the 100m fly final at the 2008 Olympics where Phelps won by 0.01 on the last stroke. A lot of people outside the US thought it was almost a conspiracy and wanted to have the results over turned. I would not say anything for sure without seeing video film from straight above or below before I am completely sure, even though it appears that Agnel is 2nd (as stated above)

You are very right! Watching the underwater footage, I suspect the timing of the panels is correct (see my comment above). Manual timing should show a margin though. Shame we can’t see that.

(1) Nice underwaters by Stravius
(2) Nice pool
(3) Thumbs up to the Malmsten/Competitor lane markers
(4) Agnel clearly second, and closer to 1st than 3rd
(5) The FFN should be absolutely embarrassed for letting this result stand.